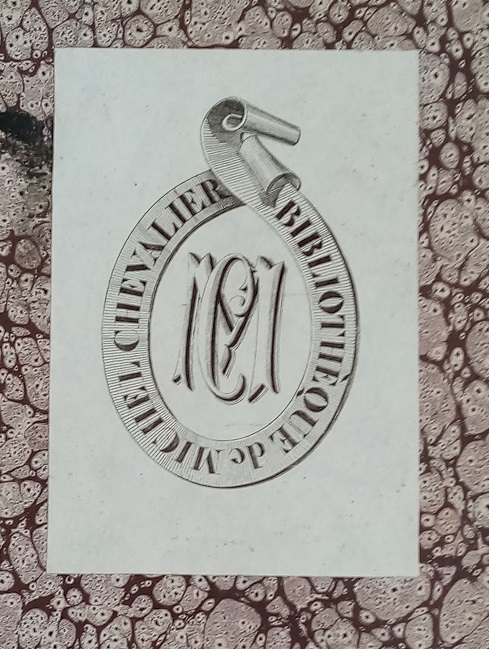 Added to your basket:
RICARDO, Samson, and others. Collection of 12 works on the Bank of England,

Twelve rare and important texts, witnessing the dispute between J. Horsley Palmer, merchant, banker and governor of the Bank of England, the economist Ricardo Samson, and the banker Samuel Loyd-Jones, one of the leading figures in the monetary history of England: a notable sammelband with a remarkable provenance.

The debate, which also involved other economists represented here, drew inspiration from the writings of Horsley Palmer on the causes and consequences of the pressure on the money market and concerns about the role of banks, the monetary system and the function of paper money, as well as the most effective way to address the crisis. The noteworthy nature of this collection from the point of view of the content is heightened by its provenance: it was assembled by Michel Chevalier (1806-1879) writer, engineer, statesman and economist, a supporter of Saint-Simon, and the editor of the Saint-Simonian newspaper The Globe. In 1837 he wrote his most important work Des interets matériels en France, and at the age of 35 he became professor of political economy at the Collège de France.

The content, all but one first editions, is as follows:

HORSLEY PALMER, J. The causes and consequences of the pressure upon the money-market; with a statement of the action of the Bank of England. London, Pelham Richardson, 1837. 65 pp.

RICARDO, Samson. Observations on the recent pamphlet of J. Horsley, Esq. On the causes and consequences of the pressure upon the money-market. London, Charles Knight, 1837. 43 pp.

LOYD, Samuel Jones. Reflections suggested by a perusal of Mr. J. Horsley Palmer’s pamphlet on the causes and consequences of the pressure upon the money-market. London, Pelham Richardson, 1837. 56 pp.

HORSLEY PALMER, J. Reply to the reflections, etc. Etc. Of Mr. Samuel Jones Loyd, on the pamphlet entitled “the causes and consequences of the pressure upon the money-market” London, Pelham Richardson, 1837. 24 pp.

LOYD, Samuel Jones. Further reflections on the state of the currency and the action of the Bank of England. London, Pelham Richardson, 1837. 52 pp.

RICARDO, Samson. A National Bank. The remedy for the evils attendant upon our present system of paper currency. London, Pelham Richardson, 1838. 65 pp.

NORMAN, George Warde. Remarks upon some prevalent errors, with respect to currency and banking, and suggestions to the legislature and the public as to the improvement of the monetary system. London, Pelham Richardson, 1838. 109 pp.

The secret Committee and the joint stock banks. A letter to the right honourable T. Spring Rice, chancellor of the exchequer by a Manchester Banker. London, Simpkin, Marshall, 1837. 29 pp.

MUNTZ, G. F. The true cause of the late sudden change in the commercial affairs of the country. Birminghan, Richard Peart, 1837. 12 pp.

Reflections on the approaching crisis; silver standard an local acceptances. By a man of straw. Second Edition. London, James Ridgway and Son, 1837. 23 pp.

Thoughts upon the principles of banks, and the wisdom of legislative interference. London, James Ridgway and Son, 1837. 77 pp.

[Drop-head title:] ‘An act for repealing the several duties of customs and excise, and granting other duties in lieu thereof, and for applying the said duties, together with the other duties composing the publick revenue; for permitting the importation of certain goods, wares, and merchandize, the produce of manufacture of the European dominions of the French King, into this Kingdom; and for applying certain unclaimed monies, remaining in the Exchequer for the payment of annuities on lives, to the reduction of the national debt.’