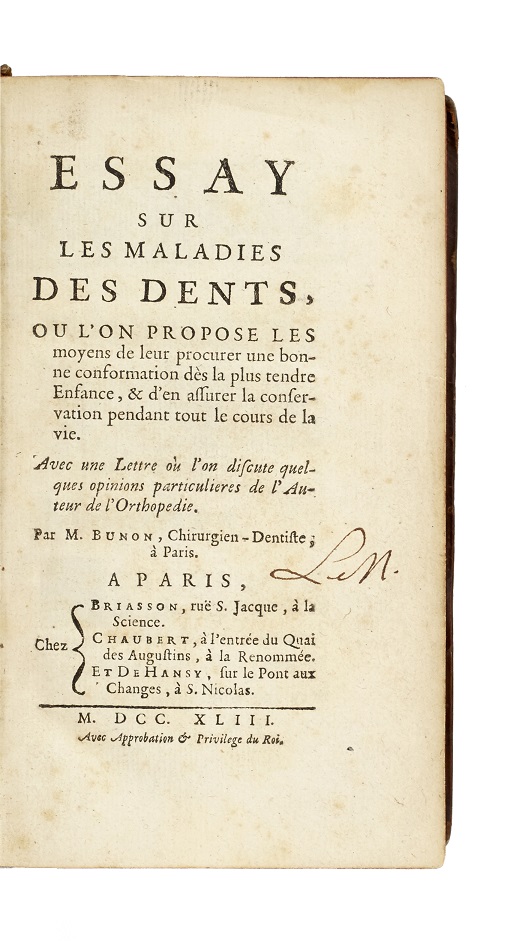 A fine sammelband of all of Bunon’s separately published writings.

‘One of the important questions studied by Bunon concerns the hygiene to be observed in order to obtain the development of a good dentition. On this question he rightly establishes the principle that hygiene and dental prophylaxis should begin from the period of the formation of the milk teeth. He works out this principle with rigorous logic, and finishes by tracing the hygiene of the mother during pregnancy, of the woman (be she mother or nurse) during the nursing period, and of the nursling as well ... Bunon’s researches into the development of the teeth enabled him to describe precisely the position that the various teeth of the second dentition occupy in the jaw with regard to the milk teeth, before these are shed. Bunon was, besides, the first author who studied accurately dental hypoplasia, and it is greatly to his honor that his ideas and observations about this pathological condition have been accepted and confirmed in substance by the greater part of the authors who have come after him, having remarkable worth even at the present day ... The high intrinsic value of Bunon’s works gives him a just right to be considered one of the most illustrious forerunners of modern scientific dentistry’ (Guerini pp. 341-43).

2. First edition, second issue (first, the year before). This is an almost entirely rewritten and substantially enlarged version of the above work. It gives critical reviews of the works by Fauchard and Geraudly, describes research and numerous experiments together with case histories, aiming to prove statements made in Bunon’s 1743 Essay. It also explains in depth the term erosion, which he had already introduced. The final section of the book, from page 372 to the end, is one of the first odontological pharmacopoeias.

In the years between the publication of the two books Bunon incessantly carried out research and investigations. ‘Bunon conducted a series of researches on the great pool of subjects at the Hôpital général, and then at the Salpêtrière, the hospital for women in Paris, with the support of the First Surgeon to the King, La Peyronie, to whom both books are dedicated. These investigations met with unexpected difficulties on the part of the patients, who feared that their teeth were to be transplanted to rich people ... Dental examinations were simply something completely out of the ordinary then. He reported his results before the Surgeon’s College of St. Côme and also demonstrated on corpses that children who had suffered from rickets, scurvy, measles, smallpox, and other diseases had erosions on teeth which were still unerupted. Bunon’s standing was enhanced by these experiments to such an extent, that the royal dentist (to Louis XV), Caperon, recommended him as his successor in this lucrative position in 1748 but Bunon died at the age of 42 in the same year’ (Hoffmann-Axthelm p. 209).

3. Bunon’s rare dissertation on the teeth of pregnant women, where he successfully attacks several popular myths. In January 1741 Bunon had published a little paper in the Mercure de France on the popular belief that the upper canines were connected with the eyes. In this work he deals again with this topic and proves that the extraction of a canine does not affect eyesight. He further proves that the extraction of a tooth during pregnancy does not directly cause miscarriage. ‘He demonstrated the falseness of the idea that one ought never to extract teeth during the state of gestation, and brought into relief the necessity of treating the dental diseases of pregnant women with still more accuracy than those of other persons’ (Guerini p. 339).