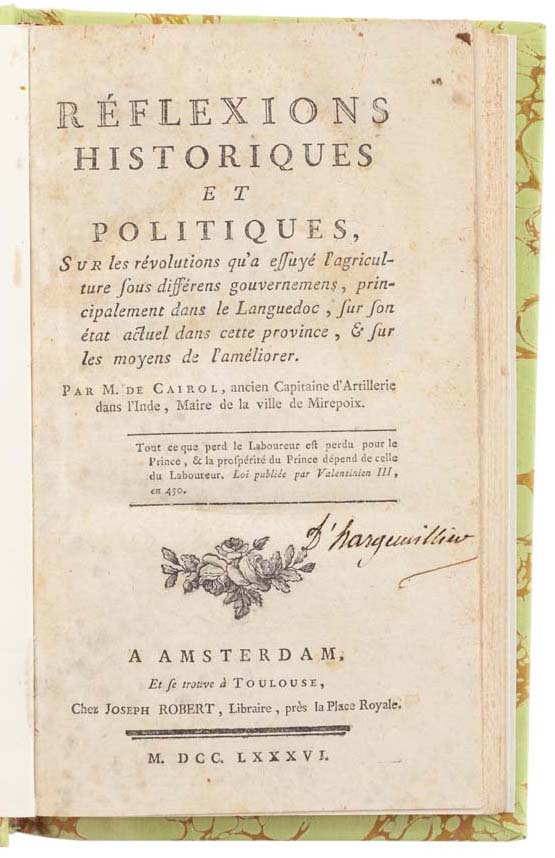 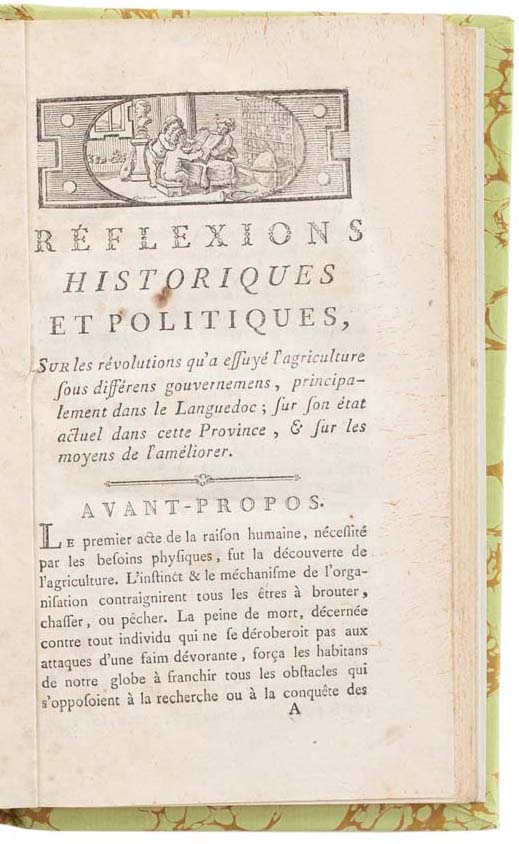 Very rare essay on the state of agriculture in France, and in particular in the Languedoc, examining the ways in which the policies of various governments (from the Romans and Visigoths onwards) have affected agricultural production, the current situation, and the ways in which matters could be improved. Throughout, the author’s concerns, although concentrated on agricultural production, are broader: he constantly reminds the reader of the extent to which the rural people of the Languedoc, although blessed with a clement climate and fertile land, are nonetheless at the mercy of the whims of their rulers, whether through the imposition of taxation or arbitrary and ill-informed decisions made de haut en bas about the crops to be produced and the methods to be employed. A lengthy set of notes, taking up the second half of the book, quote Montesquieu and Hume, describe agricultural practice in England, and present a number of statistical tables. We have found no information about the author, but it would be reasonable to assume that he was not unsympathetic to the events of the end of the decade.

The ownership signature on the title may be that of the French general and politican Joseph Etienne d’Hargenvilliers (1767–1841), sometime mayor of Toulouse.

OCLC records only one copy, at Columbia; not in Library Hub.

THE DEATH BLOW TO JANSENISM IN ITALY GUSTA, Francesco.

Scarce first edition, in an attractive binding, of this anti-Jansenist work by the Catalan Jesuit Gusta (1744-1816), who had moved to Italy following the expulsion of the Jesuits from Spain. Here he targets those involved in the controversial Synod of Pistoia of 1786, ‘the most daring effort ever made to secure for Jansenism ... a foothold in Italy’ (Catholic Encyclopedia). Summoned by the Bishop of Pistoia, Scipione de’ Ricci, and influenced by Enlightenment thinking, the synod adopted a series of decrees, only to have them condemned in 1794 by Pope Pius VI in his bull Auctorem fidei. Gusta’s text attacks both Ricci and the Jansenist theologian Pietro Tamburini, and ends with an Italian translation of the papal bull that ‘dealt the death blow to the influence of ... Jansenism in Italy’ (ibid.).

The Trials of Arthur Thistlewood, and others, for high treason, at the Old Bailey Sessions-House, commencing on Saturday, the 15th, and ending on Thursday, the 27th April, 1820. Taken in short hand, according to the method invented by John Byrom … Illustrated by back and front views of the premises in Cato Street … and by several original portraits of the principal conspirators … with an appendix, containing circumstantial details of the execution and decapitation of Thistlewood, Tidd, Ings, Davidson, and Brunt.

First edition, a fairly deluxe account by the usual standards, of the Cato Street Conspiracy trials. In 1820 five conspirators, probably from a much larger group of Spenceans centred on the radical Marylebone Union Reading Society, including one black man, Thomas Davidson, were hanged and beheaded for high treason after plotting to murder cabinet ministers.