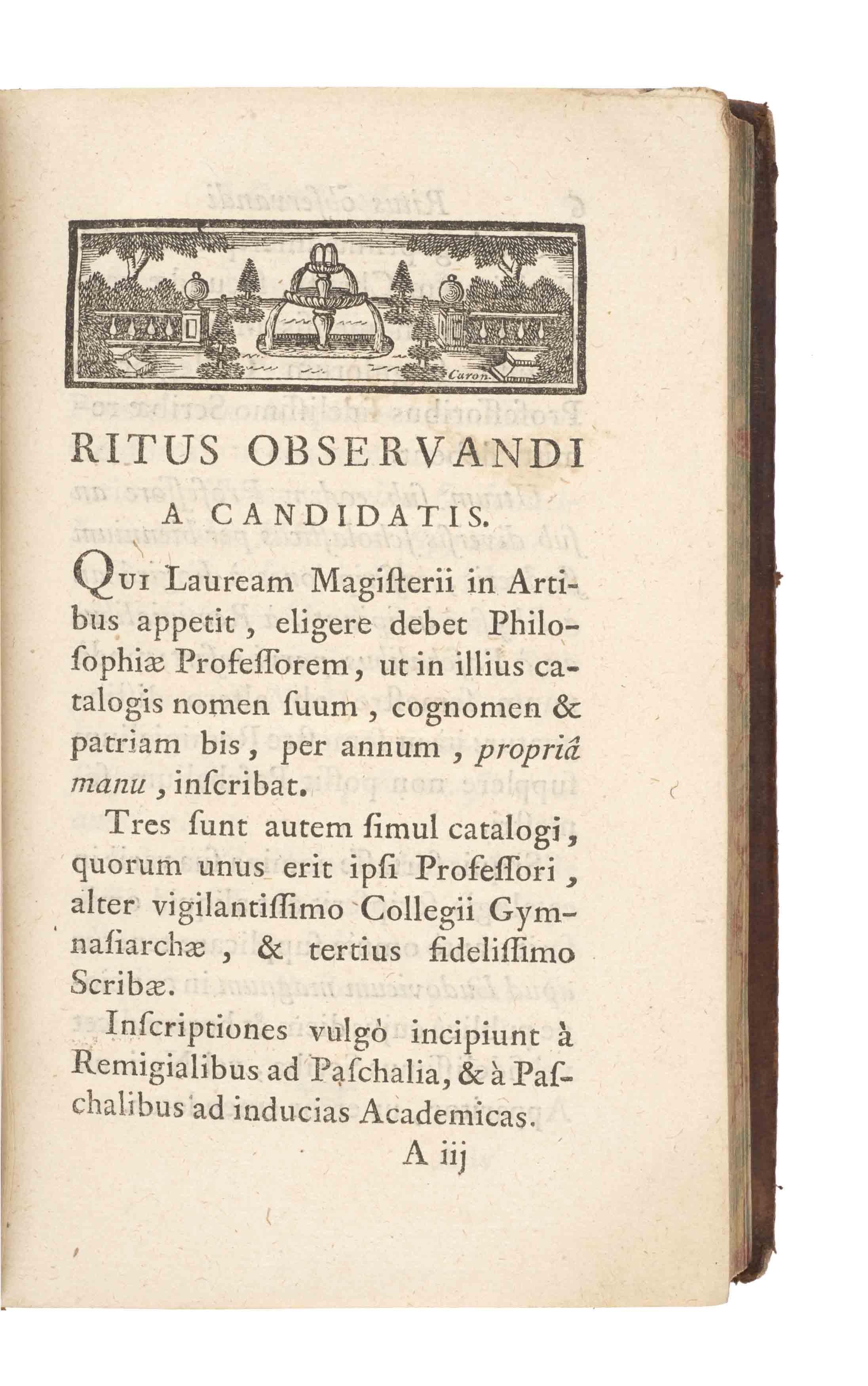 Two volumes, 8vo, pp. viii, 5-482; 361, [4] approbatio and privilege, [1] blank; with four folding plates after p. 352; woodcut headpieces; some spotting and marking, especially to start of volume one, but otherwise, aside from some light browning, clean and fresh; paper reinforcement to the fold in the plate depicting the system of Tycho Brahe, after old tear, with a loss of c. 1mm; in contemporary sheep, spine with raised bands tooled in gilt with morocco lettering-pieces; some wear, and slight loss to corner of upper board of volume one (possibly rodent-induced).

Very uncommon guide, by the Parisian surgeon Jean-Charles-Félix Caron, to the philosophy student in the University of Paris needs to know in order to graduate first as bachelor and then as master of arts in the university. The work is essentially a kind of bluffer’s guide: “there are people who, obliged to do their philosophy to pass their MA, can only devote themselves imperfectly to its study, as they are often distracted by other occupations, and who are, .by the end of their course, scarcely further advanced than they were at the start, no matter how good their tutor”. As a medic, Caron knew this all too well; having spent his university time too much engaged with patients, he was granted remedial classes with the Abbé Lettrier, and it is his précis of these classes that he presents here.

In fact, Caron’s work draws heavily on Guillaume Guillier’s Candidatus atrium, which had appeared in 1732, but the points of difference say much about the slow evolution of the syllabus into a recognisably modern one. The basic division of the subject (logic, metaphysics, ethics, and physics) remains intact, but the section on physics is vastly more expanded than that in Guillier’s work, reflecting the increased interest in the subject through the eighteenth century; Newtonian physics, completely absent from the earlier work, also makes an appearance. The four folding plates at the end of the second volume show an astrolabe and the cosmological systems of Copernicus, Ptolemy, and Tycho Brahe.

Caron (1739-1824), was the author of numerous medical works on subjects ranging from medical education to croup.

Despite the slightly odd pagination of the prelims of volume 1, this copy appears complete, matching that in the BnF and consistent with the catchwords; outside Continental Europe, OCLC records copies at the National Library of Chile and the Catholic Institute of Sydney.

FROM THE LIBRARY OF LORD ELDON WATSON, Richard.

An Apology for the Bible, in a Series of Letters, addressed to Thomas Paine, Author of a Book entitled The Age of Reason, Part the Second, being an Investigation of true and of fabulous Theology … third Edition. London, T. Evans, Cadell & Davies, P. Elmsley, J. Debrett, J.

Third edition of ‘a crucial defence of the political and social order’ (ODNB), published the same year as the first edition. Though his first political sermon, The Principles of the Revolution Vindicated, was in 1776 interpreted as a radical statement of support for the American rebels, Richard Watson, Bishop of Llandaff from 1782, remained a staunch defender of Locke’s principles and by the 1790s was seen as conservative, his most successful work being the present criticism of Paine’s deism.

Discourses concerning Government … with his Letters, Trial, Apology, and some Memoirs of his Life.

Second Millar edition of Sidney’s important Discourses, accompanied by other works. A prominent political theorist opposed to monarchy, Algernon Sidney (1623–1683) wrote the Discourses between 1681 and 1683, argues for armed resistance to oppressive government; the text, which ‘places Sidney alongside Milton as the master of republican eloquence’ and ‘includes the only explicit seventeenth-century defence of “rebellion”’ (ODNB), was found in manuscript on Sydney’s arrest and unprecedentedly used as a second witness at his trial for high treason, with Jeffreys’s justification that ‘screbere est agere’. Convicted on the evidence of these Discourses, Sidney was executed, and his Discourses left unpublished for fifteen years.