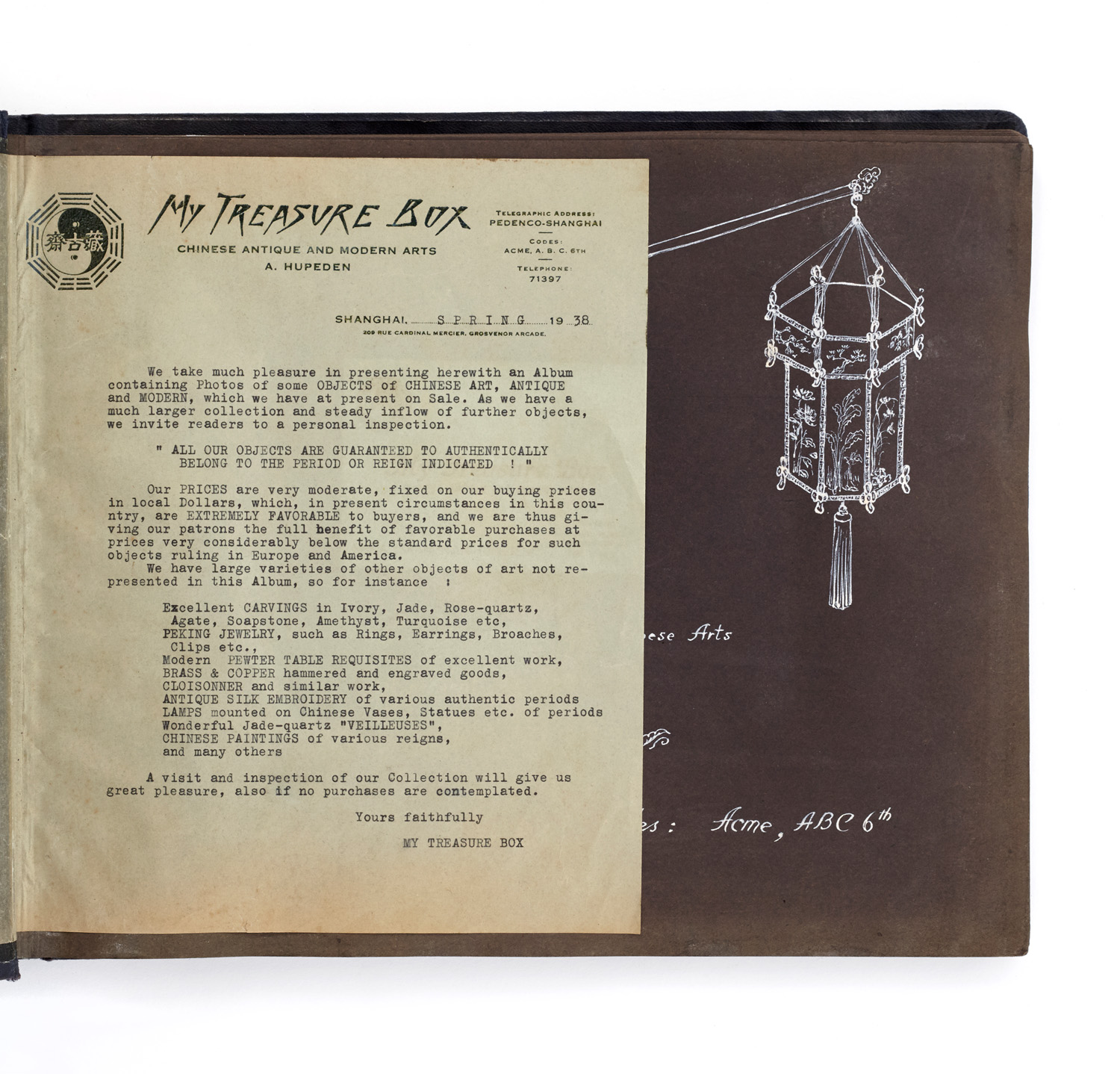 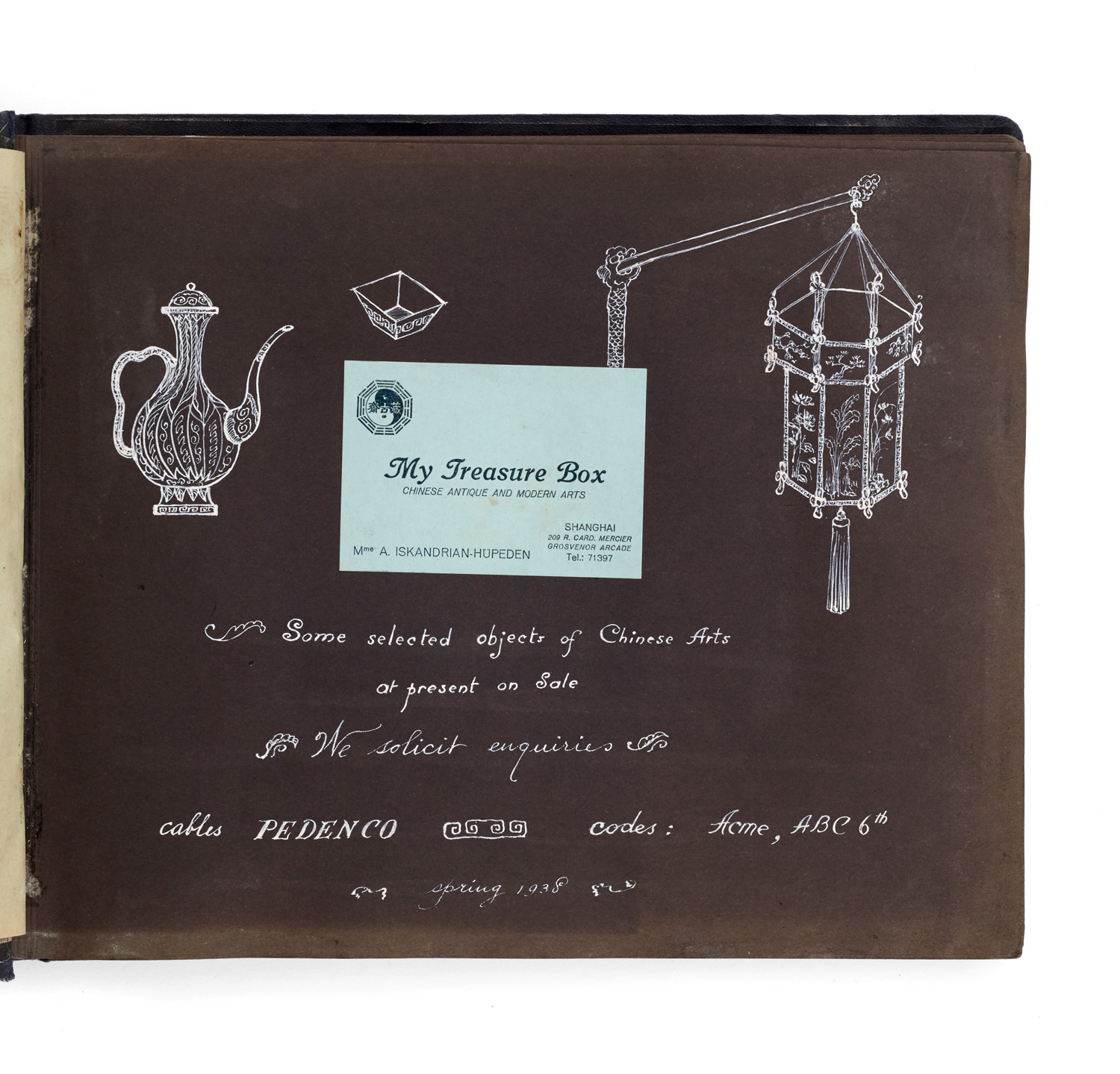 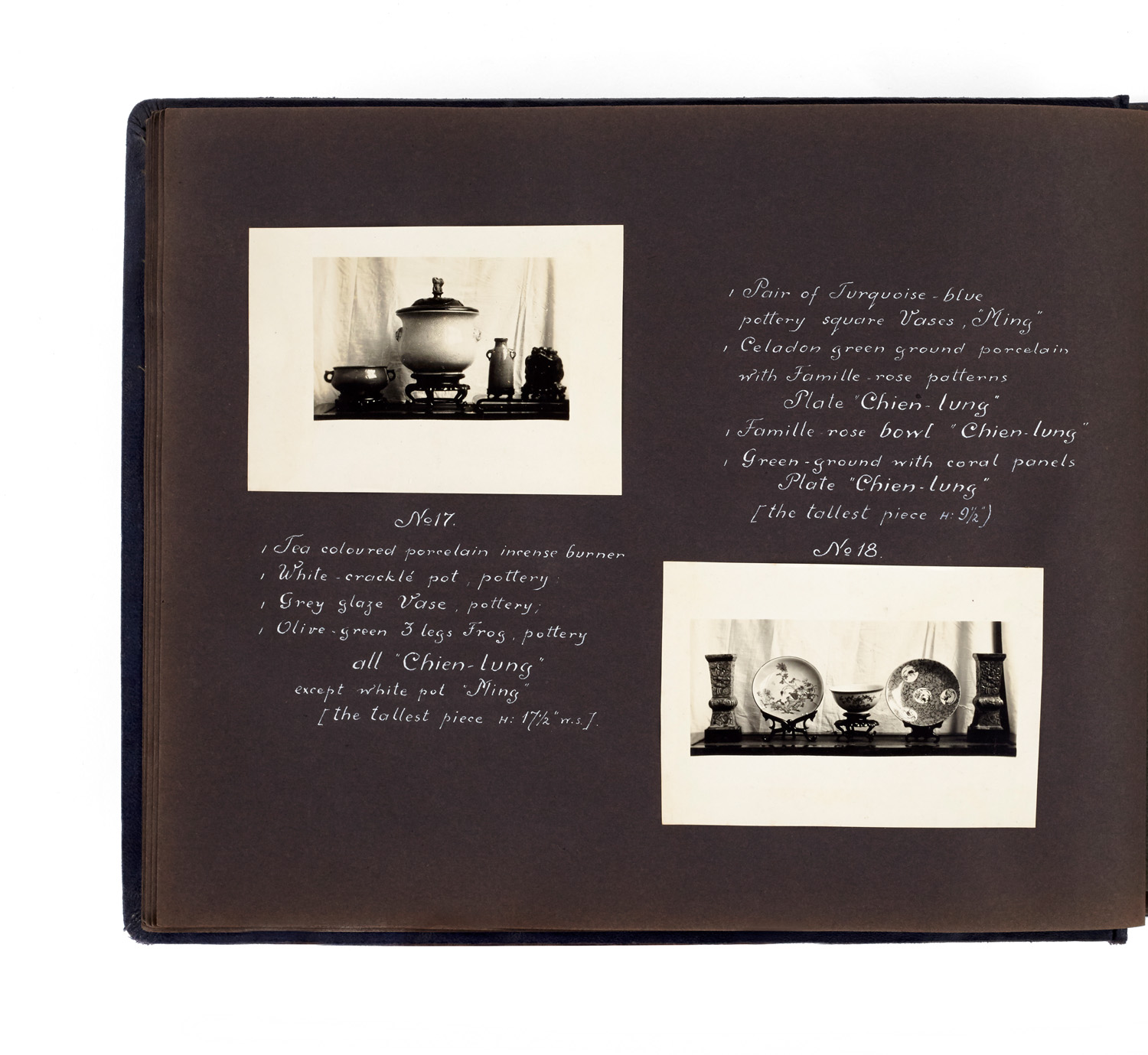 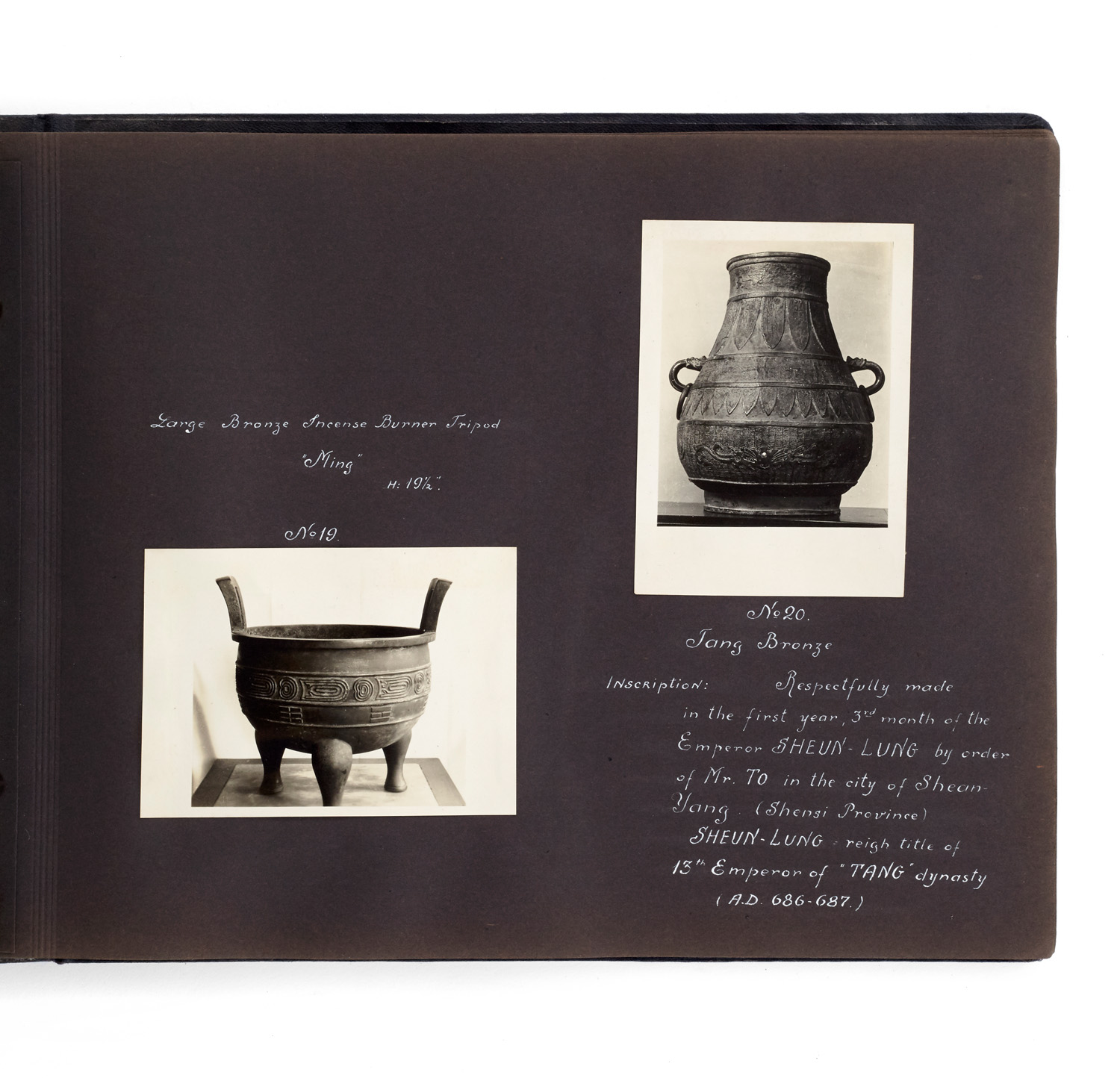 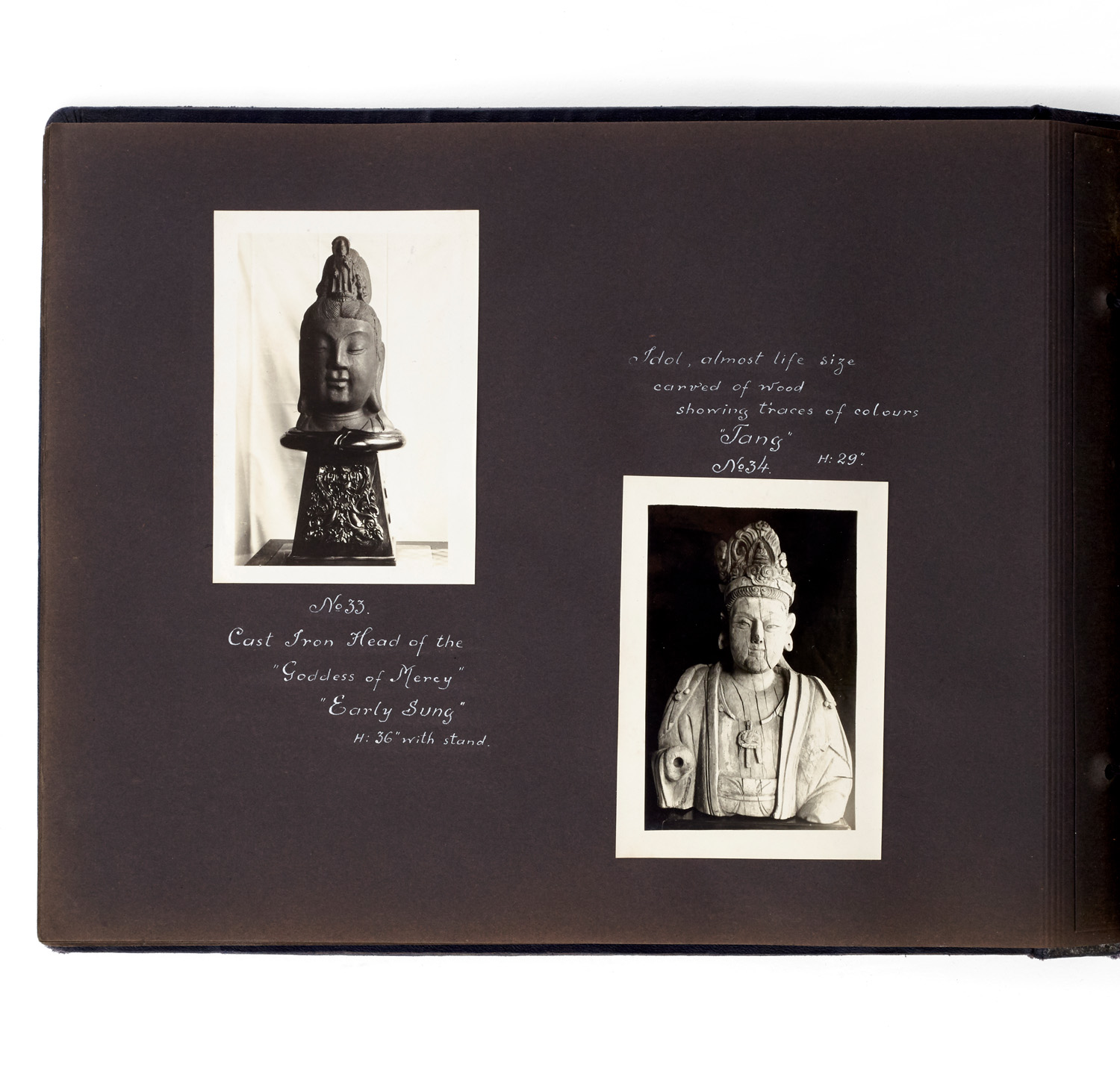 Added to your basket:
ISKANDRIAN-HUPEDEN, A. [Cover title:] ‘My Treasure Box’ [Title-page:] ‘Some selected objects of Chinese Arts at present on Sale. We solicit enquiries…’.

A charming and insightful trade catalogue compiled by a female Chinese arts dealer, covering porcelains, cast bronzes and irons, stone and wood sculpture, lacquered figures, furniture and screens, pottery and embroidery. The colours and dimensions are often described in the text, and the final page lists the dates of Chinese dynasties from 1122 B.C. and the reigns within the final Ching (Qing) dynasty.

The introductory typescript text advises customers ‘All our objects are guaranteed to authentically belong to the period or reign indicated! Our prices are very moderate, fixed on our buying prices in local Dollars, which, in present circumstances in this country, are EXTREMELY FAVOURABLE to buyers, and we are thus giving our patrons the full benefit of favourable purchases at prices very considerably below the standard prices for such objects ruling in Europe and America…’

The business card which is featured on the manuscript ‘title-page’ indicates that My Treasure Box was situated in the Grosvenor Arcade, Shanghai. Though we have not found full biographical details of A. Hupeden, a Hupeden is referenced in China importers and exporters directory (Bureau of Foreign Trade, Ministry of Industry, 1936), and Miss A. M. Hupeden is listed in the Journal of the North-China Branch of the Royal Asiatic Society for 1938/9 (Vol 69), which seems likely to be the Mme. A. Iskandrian-Hupeden quoted on the business card.

First edition of this substantial defence of the Jesuit position in the Chinese Rites Controversy. It is a rebuttal of Noël Alexandre’s Apologia de Padri Domenicani missionarii della China (published, also under a false Cologne imprint, in both French and Italian in 1699); Alexandre, an eminent theologian at the Sorbonne, led the attack against the Jesuits in France.

Photographic Views of the Island of Malta.

Photographers were active in Malta from an early date and George Wilson Bridges attempted joining two architectural views to form a panorama there, aided by the Rev. Calvert Jones, in 1846. By the second half of the 1850s James Robertson and Felice Beato had started selling multi-part albumen-print panoramas there. It was to become a popular genre for depicting the island, but it is rare to see such a comprehensive documentation of the island’s notable architecture and seascape as here. The majority of the identifications refer to military buildings suggesting these may have been the work of a trained army photographer such as a member of the Royal Engineers.