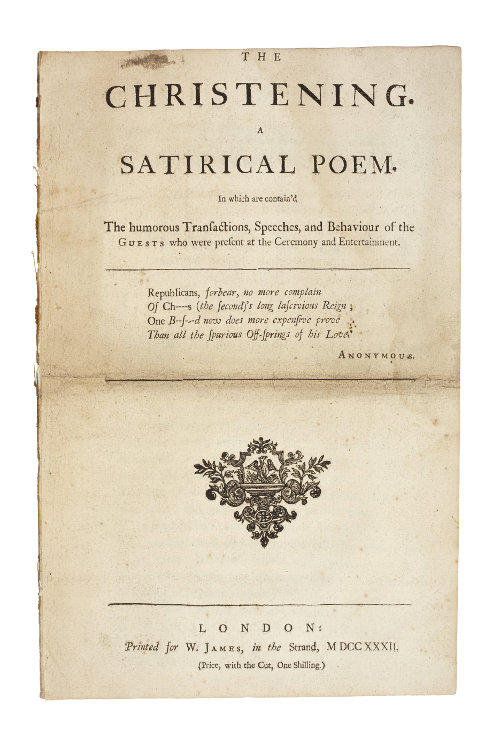 Folio, pp. 12, with an engraved frontispiece (‘The Court Gossops’ (sic.)), bound in error at the end; a little dusty, pale damp stain in top outer corner, else a good copy, disbound.

Added to your basket:
A satirical Poem. In which are contain’d the humorous Transactions, Speeches, and Behaviour of the Guests who were present at the Ceremony and Entertainment …

Here, the boy’s christening provides the author with the opportunity to assemble a cast of scandalous courtly types and satirise their greed and loose sexual morals: ‘Among the guests, mirth, Burgundy, Champeign / And smutty jests alternately do reign’.

Frederick broke off his relationship with Vane in 1735 and, suffering from ‘cholics, loss of appetite, and general decay’, she moved to Bath where both she and the child died the next year, an unhappy end alluded to by Samuel Johnson in The Vanity of Human Wishes (1749), when ‘Vane could tell what ills from beauty spring.’

The striking frontispiece depicts Vane and the Prince of Wales seated on a canopied bed in a large room. Around them, courtiers drink, wield fans, and engage in intrigue. There is a bookcase on the left of the room filled with racy titles such as Ovid’s The Art of Love and Rochester’s Poems. After ‘The Christening’ is a second satirical poem, on the benefits of abandoning sexual morals in order to achieve preferment: ‘The Happy Exchange, or a Maidenhead well dispos’d of.’ 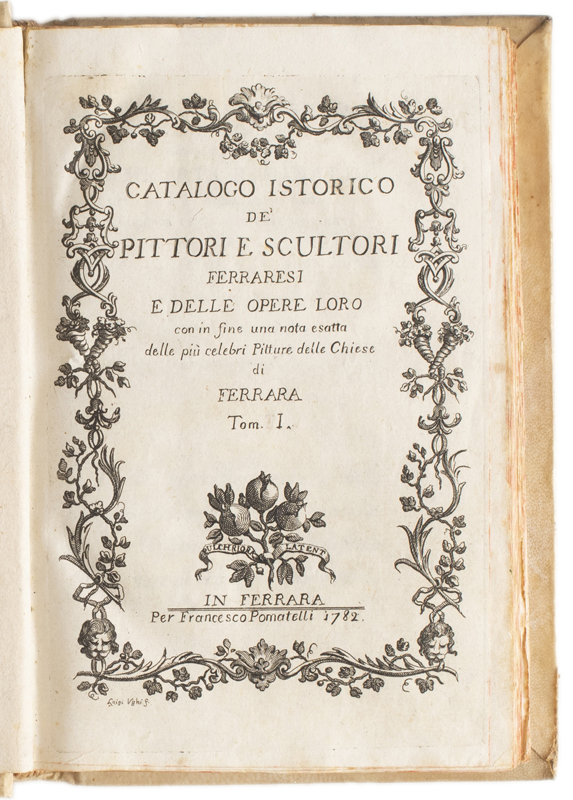 First edition of the most important source book on artistic life in Ferrara then published. Cesare Citadella (1732–1809), a painter, priest, and curator of the natural history cabinet affiliated to Ferrara University, compiled his work by using the unpublished manuscript of Girolamo Baruffaldi who had assembled material on Ferrara’s artists in the earlier eighteenth century (cf. Comolli, Bibliografia (1788) I, pp. 209-216). There is, however, much original work by Citadella, who gives a chronological account of Ferrara painters, sculptors, and engravers. Each Life is followed by a long list of the artist’s works to be found in Ferrara; the artistic output is critically evaluated. Baruffaldi’s book was not published until 1844-46.