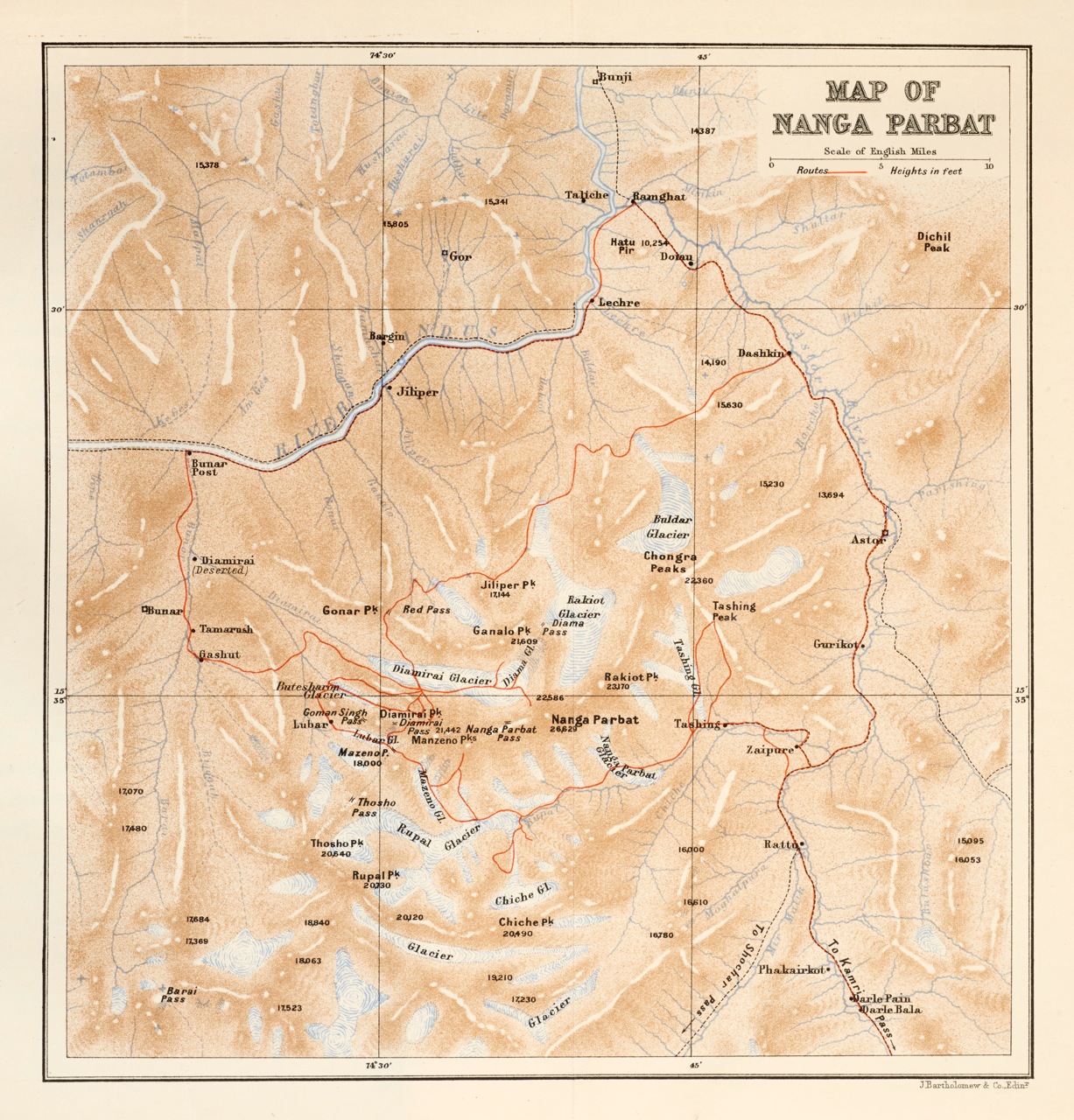 Added to your basket:
Climbing on the Himalaya and other Mountain Ranges.

‘Besides his eminence as a scientist, [Collie] acquired great fame as a climber and explorer of mountains. Beginning with the Cuillin peaks in Skye, where he discovered many new climbs, he climbed with notable success in the Alps, and went in 1895 with A. F. Mummery to the Himalayas, where they attempted the ascent of Nanga Parbat; during this expedition Mummery was killed, an episode which deeply affected Collie. The latter also climbed in the Lofoten islands off the Norwegian coast, but his greatest work was done in his pioneering climbing, mapping, and surveying in the Canadian Rockies. His books, Climbing on the Himalaya and other Mountain Ranges (1902) and (with Hugh E. M. Stutfield) Climbs and Exploration in the Canadian Rockies (1903), are famous records. In Britain, Collie climbed particularly in Skye, Snowdon, and the Lake District. He was elected president of the Alpine Club in 1920 and was an honorary member of many other climbing clubs’ (ODNB).

Climbing on the Himalaya and other Mountain Ranges was the first book published by this ‘outstanding British climber and mountaineer’ (F.V. Hartemann and R. Hauptman, The Mountain Encyclopedia (Lanham, MD: 2005), p. 54), and is described by Perret as ‘Ouvrage important sur cette période de l’alpinisme, peu courant et recherché’. The substantial first part (pp. 1-134) is dedicated to the Himalayas – and includes a full account of Mummery’s ill-fated 1895 expedition to Nanga Parbat – while the second part is composed of accounts of expeditions in the Canadian Rockies, the Alps, the Lofoten Islands, A Chuilionn, Ireland, and Wastdale Head. The work concludes with ‘A Reverie’, ‘The Oromaniacal Quest’, ‘Fragment from a Lost MS.’, and ‘Notes on the Himalayan Mountains’.

This copy was previous in the library of the Welsh chemist and mountaineer Humphrey Owen Jones, who was educated at the universities of Wales and Cambridge. In 1901 he was appointed Jacksonian Demonstrator at Cambridge, becoming a Fellow of Clare College, Cambridge in 1902 and College Lecturer in Chemistry and Physics in 1903. A distinguished career as a teacher, researcher and author followed, which led to his election to the Royal Society on 2 May 1912 (Collie had been elected a Fellow of the Royal Society in 1896; the Royal Society’s biographical records reveal that the chemists R. Meldola, W.H. Perkin, A.C. Brown, and H.B. Dixon were proposers for both men).

Jones was also an enthusiastic mountaineer, who climbed regularly in Snowdonia from 1907: ‘[he] proved to be a born rock climber, and he brought to mountaineering the same vigour and enthusiasm which he showed in his scientific work. Within a very few years he was regarded as one of the most skilful cragsmen and capable mountaineers in Britain’ (J. Shorter, ‘Humphrey Owen Jones, F.R.S. (1878-1912), Chemist and Mountaineer’, in Notes and Records of the Royal Society of London (vol. 33 (1979), pp. 261-277, at p. 272). Together with his student and (later) wife Muriel Gwendolen Edwards, he visited the Alps regularly, and ‘He was particularly interested in the south side of Mont Blanc, with its great Brouillard and Peuteret Ridges. Jones was present on several notable first ascents including the Aiguille Blanche de Peuteret from the west, the Brouillard Ridge from the Col Emile Rey, and La Pointe Isolee of Les Dames Anglaises’ (loc. cit.). This interest would have doubtless made Collie’s work particularly interesting to Jones, since the chapter on the Alps discusses Mont Blanc in some detail. Following their marriage on 1 August 1912, the Joneses honeymooned in the Alps, where they embarked upon an ascent of Mont Rouge de Peuteret (a peak on the south side of Mont Blanc) with their guide Julius Truffer on 15 August. During the ascent, Truffer slipped and pulled the other two, roped climbers with him to their deaths on the Fresnay Glacier, some 300 metres below. 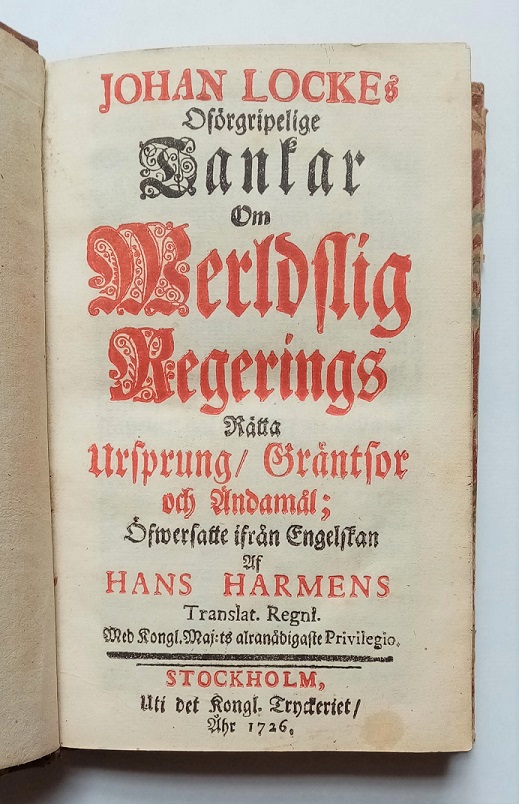 First edition in Swedish. The first translation into Swedish of Locke’s Two Treatises of Government, this edition – of the Second treatise – was translated, following order of the Swedish Ricksdag, by Hans Harmens from Mazel’s 1691 French edition. It was only the second time that any of Locke’s work had been translated into Swedish. Significantly, the Ricksdag’s interests focussed on the part of Locke’s work which addressed the topics of natural rights and the social contract.