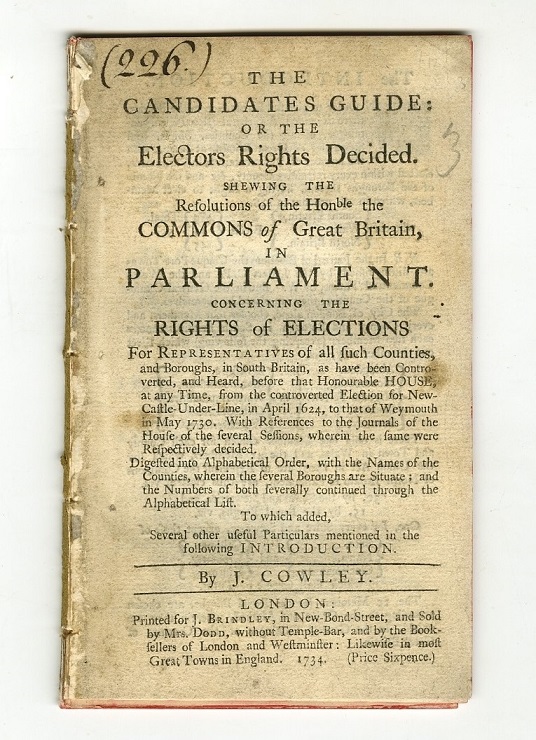 Added to your basket:
The Candidates Guide: or the Electors Rights decided. Shewing the Resolutions of the Honble the Commons of Great Britain in Parliament concerning the Rights of Elections for Representatives of all such Counties ... as have been controverted, and heard, before that honourable House, at any Time ... To which added, several other useful Particulars mentioned in the following Introduction ...

First edition of a guide to electoral rights ‘from the controverted Election for New-Castle-Under-Line, in April 1624, to that of Weymouth in May 1730’. Based on the Commons journals, Cowley assembles an alphabetical list of who can vote in each borough. In Lichfield, for example, the right is held by ‘the Bailiff, Magistrates Freeholders of 40 s. a Year, and all that hold by Burgage Tenure. And such as are enrolled, and pay Scot and Lot, and also such Freemen only of the Taylors Company, as are enrolled in the new Book of Constitutions (and not the old Book)’.

The general election of 1734 was a hard-fought one, subject to agitation after Robert Walpole’s roughshod attempts to extend excise duties to tobacco and wine. ‘There were 136 contested elections, more than in any other general election before 1832, except 1710 and 1722. In open constituencies, counties and boroughs alike, the government was trounced’ (Paul Langford, A Polite and Commerical People).

Authentick Coppie of the Tryal of Scot and Mackpherson Anno 1712. Laid before the House, pursuant to their Lordships’ Order for that Purpose, 18 Aprilis, 1737.

The Trials of Arthur Thistlewood, and others, for high treason, at the Old Bailey Sessions-House, commencing on Saturday, the 15th, and ending on Thursday, the 27th April, 1820. Taken in short hand, according to the method invented by John Byrom … Illustrated by back and front views of the premises in Cato Street … and by several original portraits of the principal conspirators … with an appendix, containing circumstantial details of the execution and decapitation of Thistlewood, Tidd, Ings, Davidson, and Brunt.

First edition, a fairly deluxe account by the usual standards, of the Cato Street Conspiracy trials. In 1820 Thistlewood and four others, probably from a much larger group of Spenceans centred on the radical Marylebone Union Reading Society, including one black man, Thomas Davidson, were executed for treason for their part in a plot to assassinate the Prime Minister and his whole cabinet, then establish a 'committee of public safety' to oversee a Revolution. Police spies uncovered the plot, and thirteen were arrested. Those not executed faced transportation.