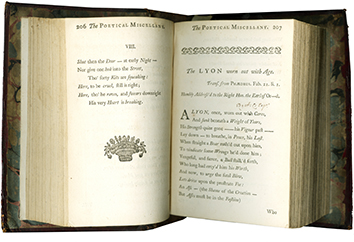 2 vols., 8vo., bound in one, pp. xvi, 416; and [2], 427, [1, blank], wanting the errata leaf at the end of volume II; contemporary dark red morocco, gilt fillets on covers, spine elaborately gilt (a little rubbed), morocco label, a ‘stilted’ binding (with the covers projecting beyond the edges of the leaves, to range on the shelf with taller neighbours).

Added to your basket:
The Norfolk poetical Miscellany. To which are added some select Essays and Letters in Prose. Never printed before. By the Author of the Progress of Physick. In two Volumes …

First edition. This lively miscellany, containing a large number of amusing short poems (but nothing for the libertine), was assembled by William Cowper’s uncle, the father of Theodora, later Lady Hesketh, with whom the poet fell in love. The dedication to the young Lady Caroline [Cowper] is subscribed ‘Timothy Scribble’: ‘Too true it is, that the present Age has been fruitful of Miscellanies; and I wish it was less true, that even the best Collections of them (tho’ handed to us by the brightest Wits of our Family [i.e. Scribblers and Scriblerians]) are not without some Impurities, which make them very unfit Companions for Youth ….’ ‘But to say a Word of the following Collection. It consists chiefly of Original Pieces – many of them (and those I fear the worst) are the Editor’s own – some never so much as handed about in Manuscript – few ever committed to the Press before ….’

The contents vary widely, from ‘On giving the Name of Georgia to a Part of Carolina’ and ‘A Prologue to the Opera of Rosamund, as it was perform’d in a Private Family in Bedfordshire’ to ‘A Poetical Dialogue between Windsor and Richmond’ after the death of Queen Caroline.

In this copy a contemporary annotator has identified all of the editor’s contributions and a few others. The errata leaf was probably omitted or removed because the errors have been corrected by the annotator, who has also filled in blank names.

The Rape of Helen. Translated from the Greek ... And illustrated with the Notes of Michael Nicander. To which is prefix’d a Fragment of the Author’s Life, from Suidas.