8vo, pp. [6], 87, [1, imprimatur]; with preliminary blank; publisher’s device to title-page, woodcut head- and tail-pieces; some ink blots to one leaf, but a fine, crisp copy in contemporary quarter calf over paper boards, vellum tips, spine with brown morocco label, gilt, rubbed with some loss to spine; imprint underlined in red crayon, notations in the same crayon to cast list; contemporary ownership inscription in ink to title-page. 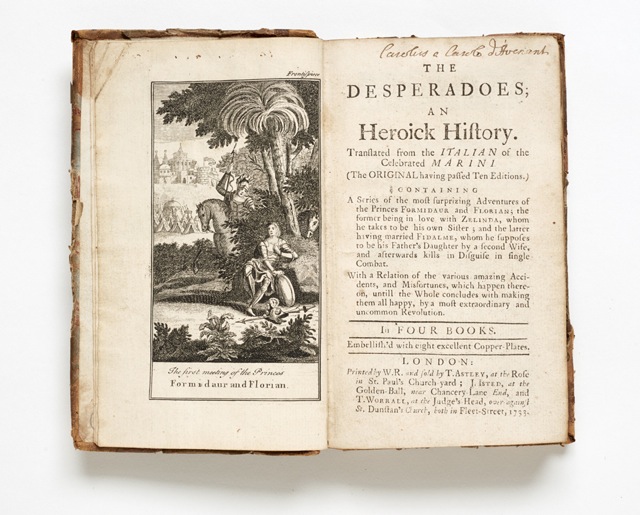 The Desperadoes; an heroick History. Translated from the Italian of the celebrated Marini (the Original having passed ten Editions.) Containing a Series of the most surprizing Adventures of the Princes Formidaur and Florian … In four Books. Embellish’d with eight excellent Copper-Plates.

First and only edition in English of Le gare de’ disperati (1644), the second of three romances by Marini (1596-1668). Inevitably, ‘It was necessary to omit many Things that were contrary to our Morals; to Decency, and to the Purity of the English Tongue …’. But the general scheme of events is the same as the original, and is outlined on the title-page: ‘A Series of the most surprizing Adventures of the Princes Formidaur and Florian; the former being in love with Zelinda, whom he takes to be his own Sister; and the latter having married Fidalme, who he supposes to be his father’s Daughter by a second Wife, and afterwards kills in Disguise in single Combat. With a Relation of the various amazing Accidents, and Misfortunes, which happen thereon, until the Whole concludes with making them all happy, by a most extraordinary and uncommon Revolution.’

First edition of Ludovico Ariosto’s collected verses, bound with a rare and early edition of his Herbolato, and the equally rare second complete edition of Pietro Aretino’s Marfisa: all three works published within three years in Venice.