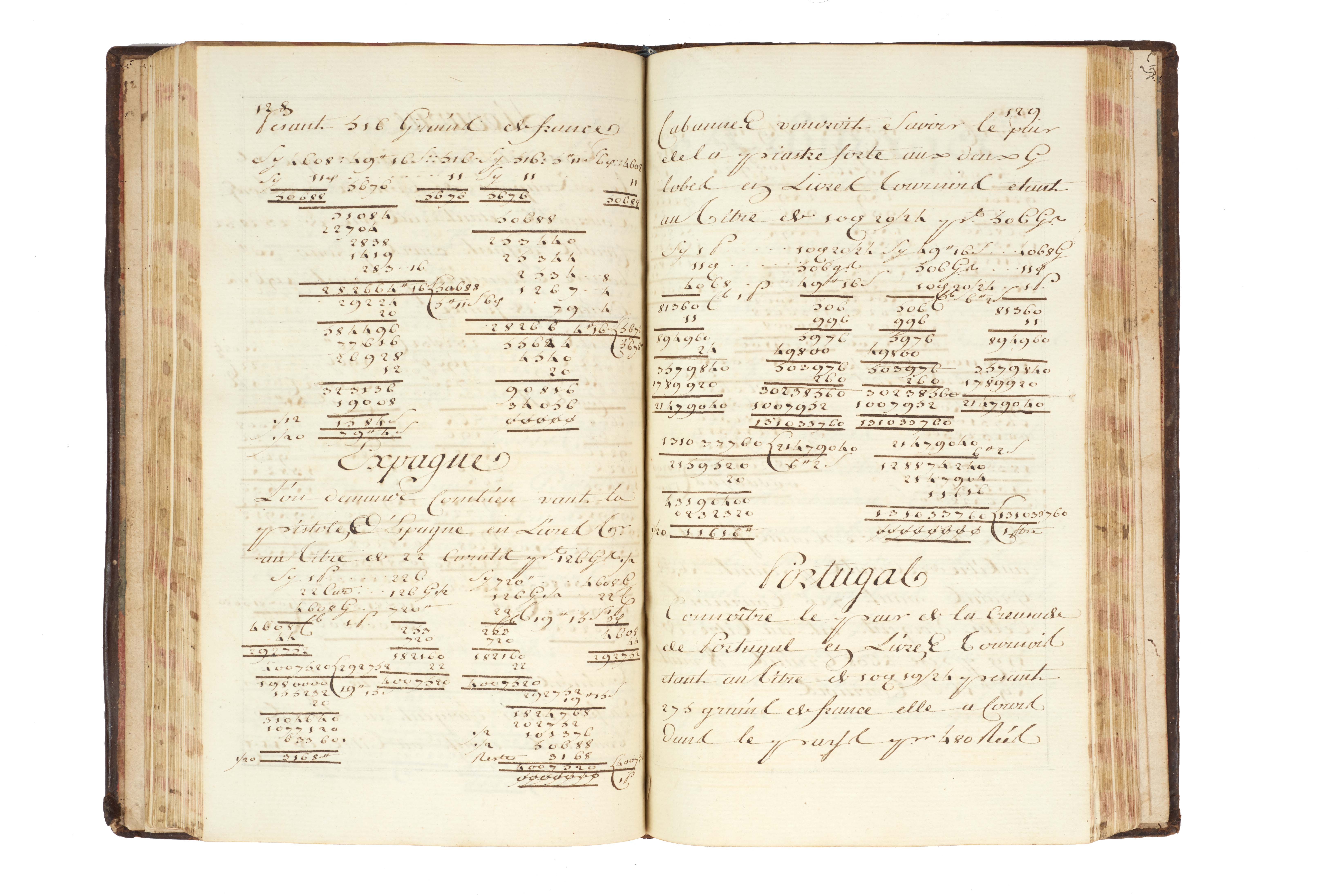 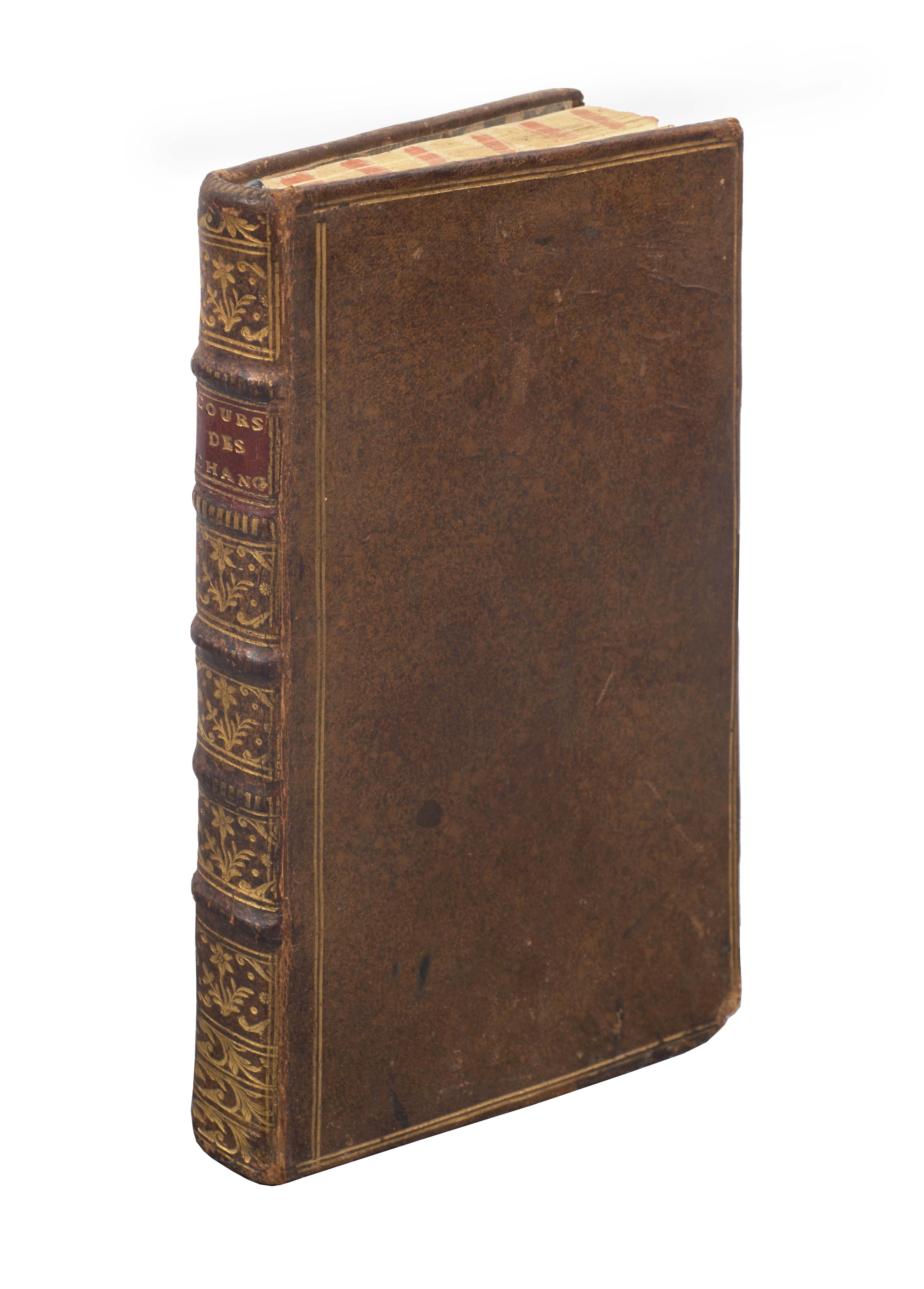 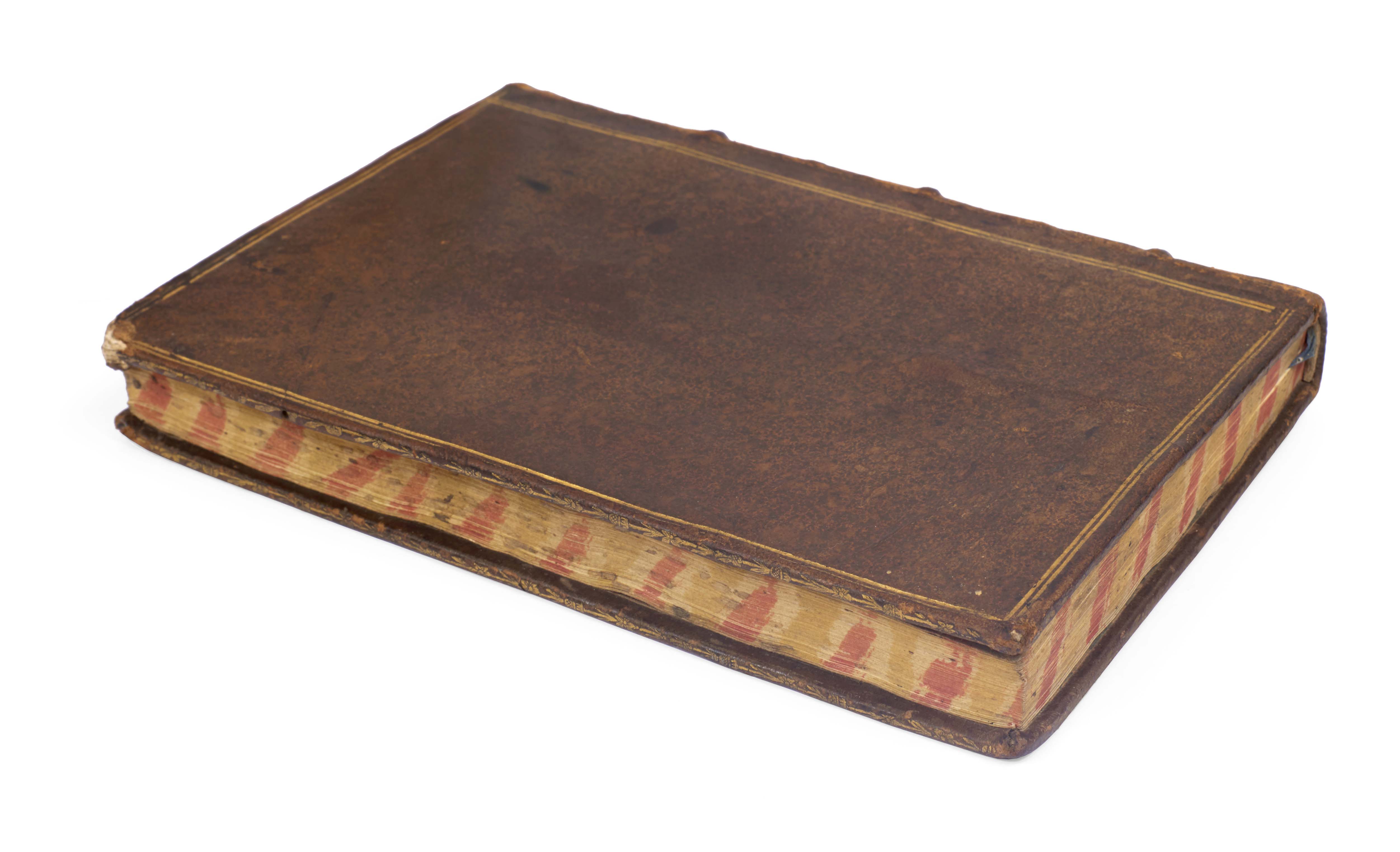 Manuscript on paper, 8vo, pp. [i], [iii] blank, 202, [1] blank, [1] notes, [2] blank, [8] notes; in ink in an elegant legible hand, decorative border on title-page; numerous tables and calculations; aside from some offsetting from title-page, clean and crisp throughout; attractively bound in contemporary calf, gilt borders, spine in compartments tooled in gilt, with gilt-lettered morocco label; all edges with red lines; some light wear to corners and extremities, but still a very appealing volume.

A lovely manuscript course of exchange and arbitrage, produced for a school run by the Lasalians in Montpellier by an alas unidentified baroness (possibly Françoise de Chaslus (1734 – 1821), wife of Jean-François, duc de Narbonne-Lara, and lady-in-waiting to Princess Marie Adélaide, although this attribution feels unlikely).

After a brief introduction to the principles underlying exchange, chapters follow on exchange in France, England, Hamburg, Geneva, and elsewhere, as well as on arbitrage. Throughout, we are offered instructions in how to calculate various exchanges, followed in each case by a number of questions, fully worked out examples, and a series of remarks on any complications that might arise. Appendices, in a different contemporary hand, give local tariffs and specific equivalences for local units of measurement throughout the south-west of France.

There is no evidence that this course was ever published.

First edition, an uncut copy in wrappers, of the sole example of Condorcet’s economic writings to employ mathematics. Condorcet’s use of ‘the sign ∫ as a sign of summation of finite quantities’ is an ‘innovation’ in his ten-page footnoted discussion of the various ways ‘in which indirect taxation could be replaced by direct taxation and the effects of such a change’ (Theocharis, p. 65). This biography, together with that of Dupont, is the chief contemporary account of the renowned financial reformer and physiocratic sympathizer, Turgot.

First edition, rare, of an influential work of pre-Romantic aesthetics. Alexis is one of four Platonic dialogues written by the Dutch philosopher François Hemsterhuis, and is one of his most important works. Although written in 1783 it did not appear in print until this edition of 1787, with a German edition appearing in the same year. ‘In Alexis Hemsterhuis, perhaps influenced by contemporary German philosophy, presented for the first time his concept of the golden age and the harmonious development of the individual. He also introduced the notion of the value of poetical truth (truth discovered by the poet in moments of enthusiasm) … his thought was received with admiration and approval by representatives of the Sturm und Drang and romantic movements in philosophy’ (Encyclopedia of Philosophy III, 474).