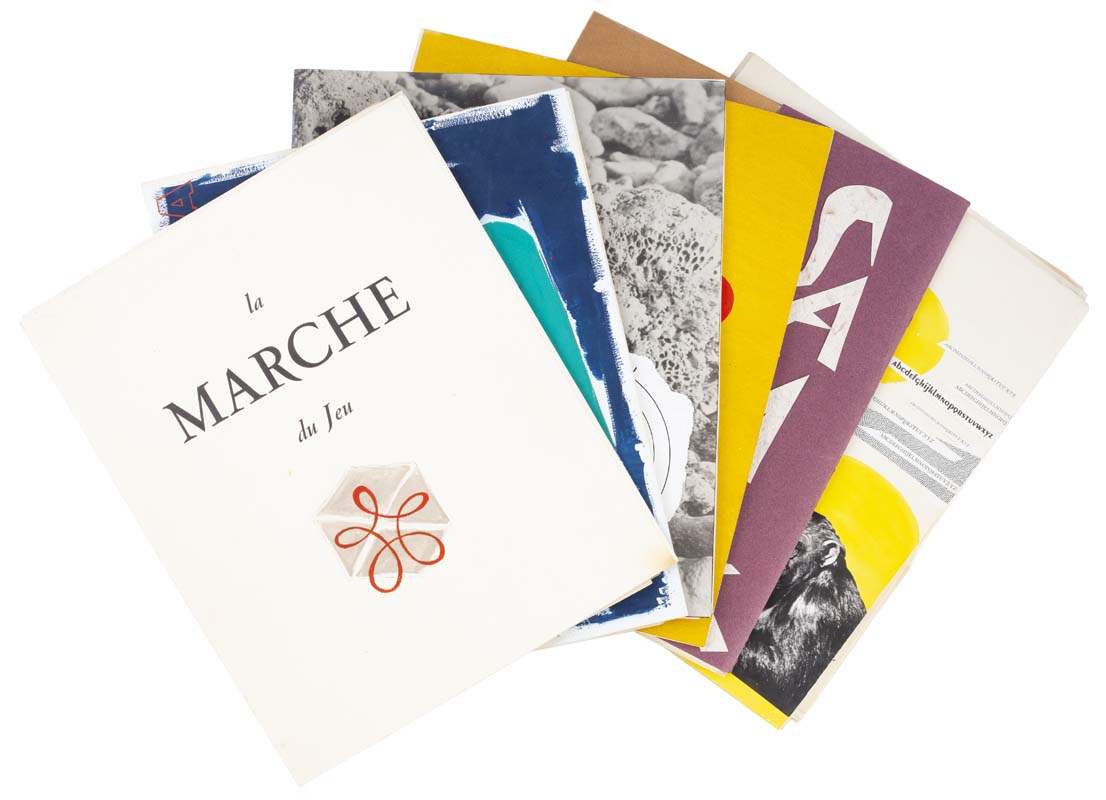 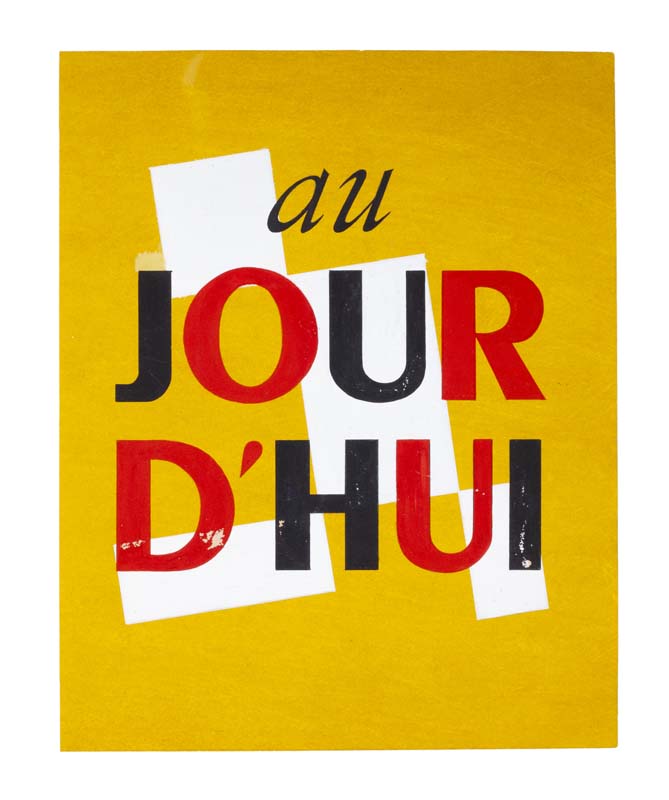 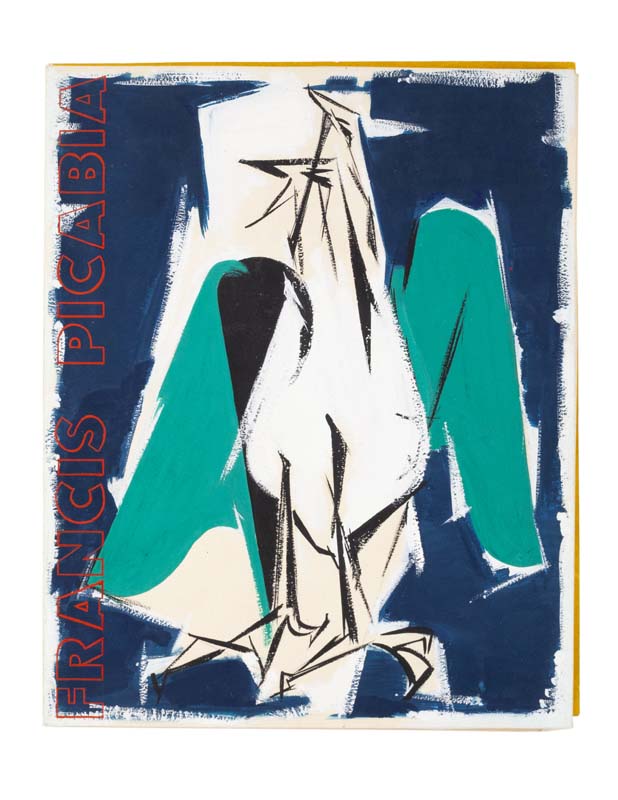 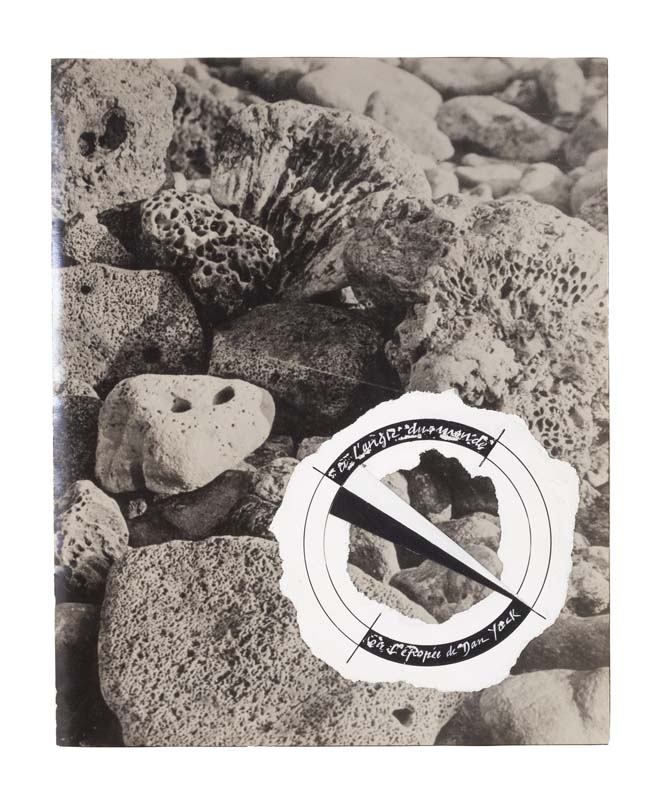 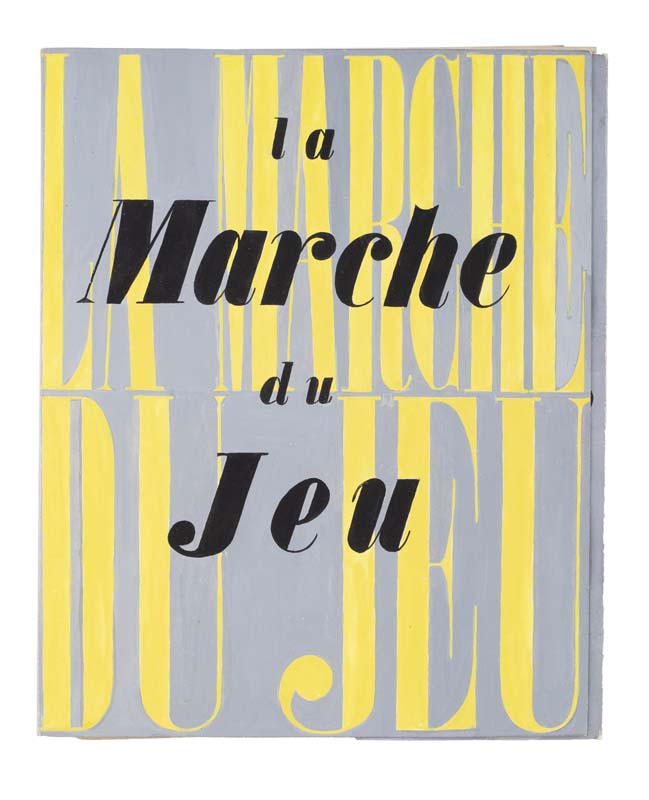 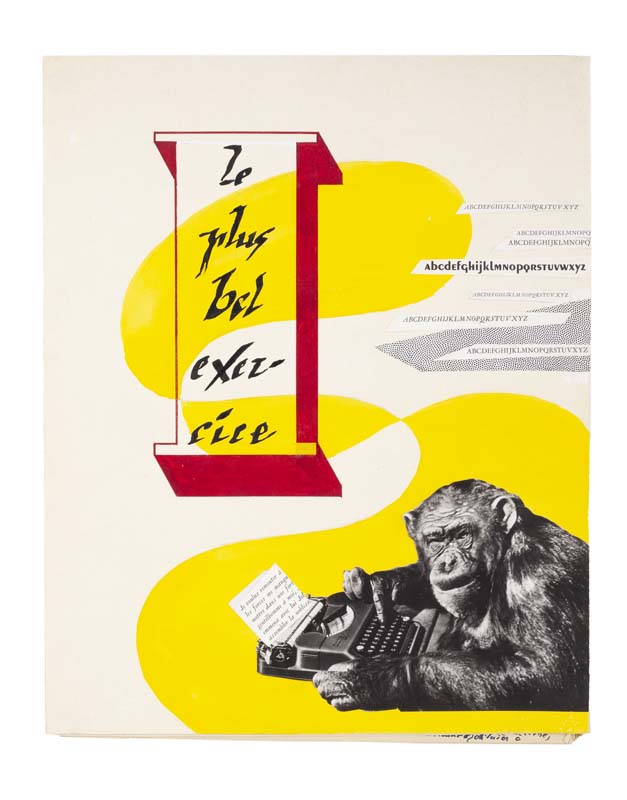 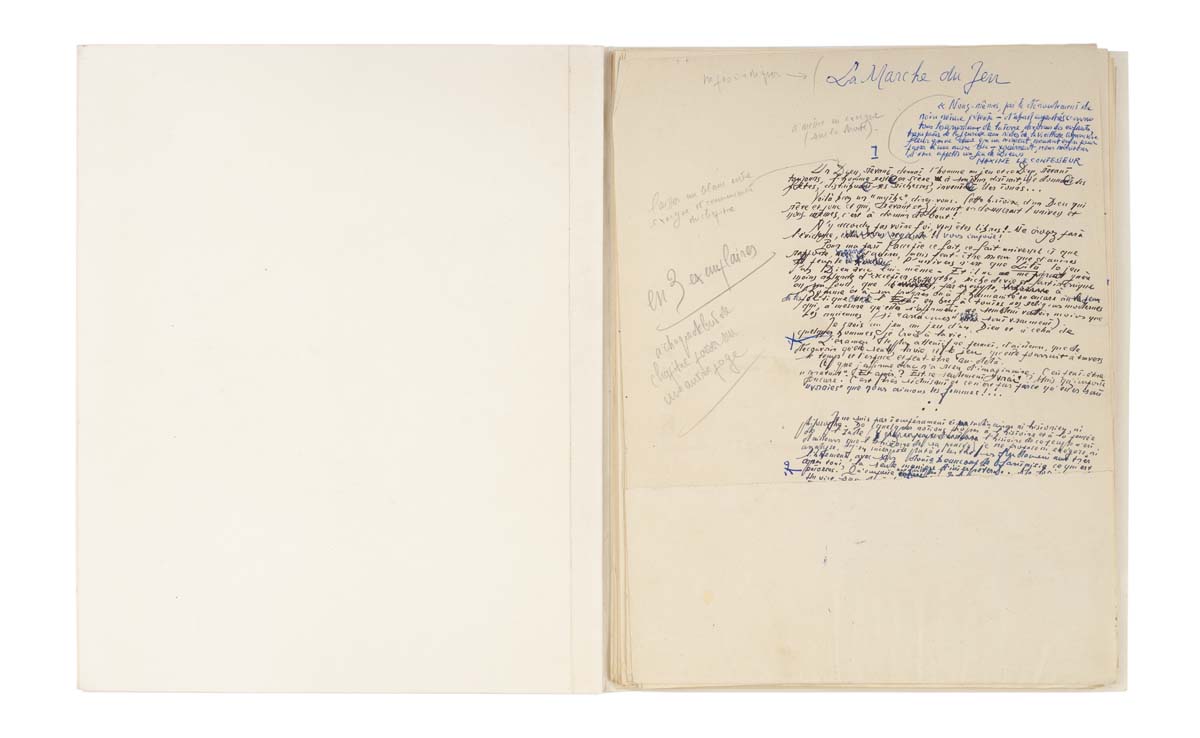 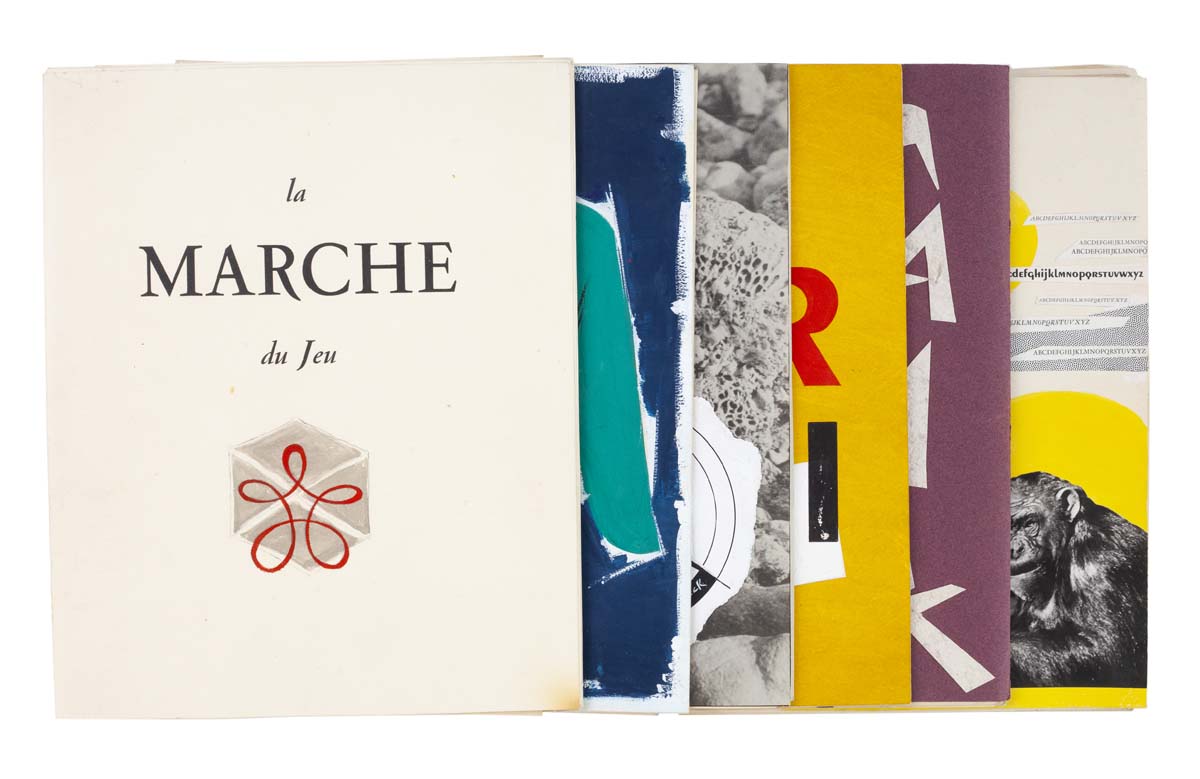 4to maquette, comprising a printed general title-page and dedication (to the author’s father and Jean-Henry Lévesque), and 7 autograph manuscript essays, written on loose sheets on rectos only in blue pen, and heavily corrected in pen and pencil throughout; each part preserved in a hand-decorated chemise; the whole group in a folding painted chemise with the general title-page, and in a black card box, decorated in scraffito on the front with an image of Brahma, and with a chess-board in perspective on the rear (edges worn), the interior faces with a black and white typographic design.

Added to your basket:
Autograph working manuscript of a collection of essays and pensées entitled ‘La Marche du Jeu’.

The full contents are:

‘La Marche du Jeu’, undated, ff. [40], in a printed chemise with decorative details in red and grey gouache, and with a loose printed epigraph translated from Nietzsche, similarly decorated.

‘Francis Picabia ou le jeu créateur’, November 1946, ff. [23], in a chemise extensively decorated in gouache with an image of a bird in the manner of Picabia. Signed and dated at the end.

‘Un Savant’, 1 April 1951, pp. [52], in a chemise of brown and purple card, with a collage title and two photographs (one of a hippopotamus). On Jean van Heeckeren. Signed and dated at the end. With a manuscript note by Van Heeckeren at the end, dated 22 July 1951.

‘Le plus bel exercice’ undated, pp. [47], in a paint and collage chemise with a photograph of a chimpanzee using a typewriter.

La Marche du Jeu, though never published, was Fricker’s great masterpiece, ‘synthèse de ses reflexions qu’il mènera à bien jusque vers les années 1960, qu’il ira même jusqu’à imprimer, mais finalement ne publiera pas’ (ibid.). It is a free-ranging assemblage of thoughts, centred on Paris of the 1940s and ’50s, and Fricker’s own twin passions of art and poetry. There are essays on Picabia, Cendrars (Dan Yack being Cendrars’ alter ego and the protagonist of two novels in the 1920s), Van Heeckeren, and Duchamp, but even within those are digressions on the state of art (‘L’art est mort’), poems or lines of half-prose, half-poetry. The whole is dedicated to another member of the circle, the poet Jacques-Henry Lévesque. ‘La marche du jeu’ was evidently a phrase that became closely associated with Fricker – Lévesque would later write in Fricker’s copy of Poésies complètes (1944) by Cendrars: ‘à Bernard, qui connait “la marche du jeu”; en attendant la cyclone prévu pour ses 30 ans’.

Though it is not signed, the maquette, with its glorious variety of decoration specific to the contents of each section, is almost certainly by Jeanine Fricker (1925–2004), Bernard’s sister, a friend and disciple of Massin, the only female member of the Club du meilleur livre, founded 1946, and later artistic director for Gallimard. She produced over a hundred book designs for the Club, and her work as a maquettist put her at the forefront of a field then almost exclusively dominated by men. In 1968, Bernard, turning publisher, issued her typographical showpiece, Paris: Quelques textes mis en page par Jeanine Fricker et son atelier, a luxurious works setting texts by Cendrars, Simenon, Nerval, Nietzsche etc. With Massin, she was the subject of a large retrospective at Chartres in 2008.

See Fricker, Mythologie, philosophie, poésie (1999), edited and with an introduction by Bernard Deforge.