Under permanent house arrest by decree of the Inquisition following the condemnation of his pro-Copernican Dialogo sopra i due massimi sistemi del mondo, in 1633 Galileo continued his unfinished work on mechanics. Once it was finished, the issue of ecclesiastical licence to print proved insurmountable in Italy, and Galileo resorted to the Elzeviers in Leiden. The Discorsi provide the mathematical foundation for the philosophical exposition of the Dialogo, thus being ‘considered by most scientists as Galileo’s greatest work’ (PMM). ‘The two sciences with which the book principally deals are the engineering science of strength of materials and the mathematical science of kinematics … Galileo’s Two New Sciences underlies modern physics not only because it contains the elements of the mathematical treatment of motion, but also because most of the problems that came rather quickly to be seen as problems amenable to physical experiment and mathematical analysis were gathered together in this book with suggestive discussions of their possible solution’ (DSB V, p. 245).

Our copy is perhaps the most important to have come to the market in the last quarter-century. It belonged to Pierre Varignon (1654–1722), member of the Académie des Sciences and one of the preeminent scientists of his time, very close to Newton, Leibniz, and the Bernoullis. Varignon demonstrated the principle of the parallelogram of forces simultaneously with and independently of Newton. He was the first French scientist of note to advocate the new differential calculus.

‘Varignon’s interest in the volume was probably related to his work on De la Résistance des Solides … in which he attempted to incorporate the hypotheses of both Galileo and Mariotte in a single formula. Todhunter and Pearson note, however, that in order to apply this formula it will usually be “necessary to assume some definite relation between the extension and resistance of the fibres”’ (Roberts & Trent, Bibliotheca Mechanica, p. 130).

These are valid comments. However, more specifically, the annotations point to Varignon’s keen interest in the sections devoted to defining uniform acceleration, and their corollaries. In this work Galileo acknowledges that at one time he thought it would be more useful to use the term ‘uniform acceleration’ for motion in which speed increased in proportion to the distance travelled, rather than to the time fit. Now he chooses to define uniform acceleration as the motion in which the change of speed is proportional to elapsed time. Varignon’s economic underlinings and annotations home in on points of crucial interest, on the development of consequential theories from premises, on diagrams; they underscore points upon which Varignon raises doubts. His objections consist especially of displeasure with ‘merae suppositiones’, or ‘gratis suppositiones’, mere assumptions – touching not so much the core of Galileo’s theory as its corollaries. A full exploration of the geometric corollaries of Galileo’s theory must indeed have been a crucial point of departure for the perfecting of Varignon’s own theorem, in Projet d’une nouvelle mécanique, 1687, stating that if many concurrent forces are acting on a body, then the algebraic sum of torques of all the forces about a point in the plane of the forces is equal to the torque of their resultant about the same point. 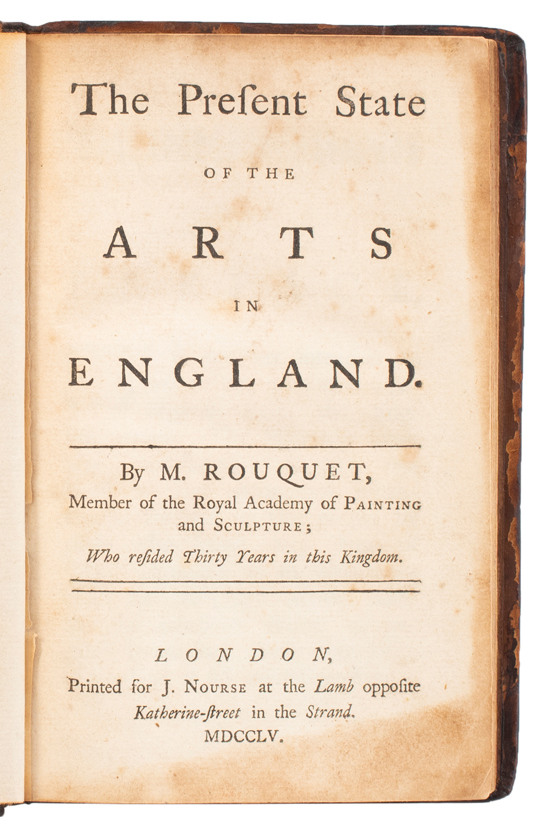 The present State of the Arts in England.  By M. Rouquet, member of the Royal Academy of Painting and Sculpture; who resided thirty years in this kingdom.