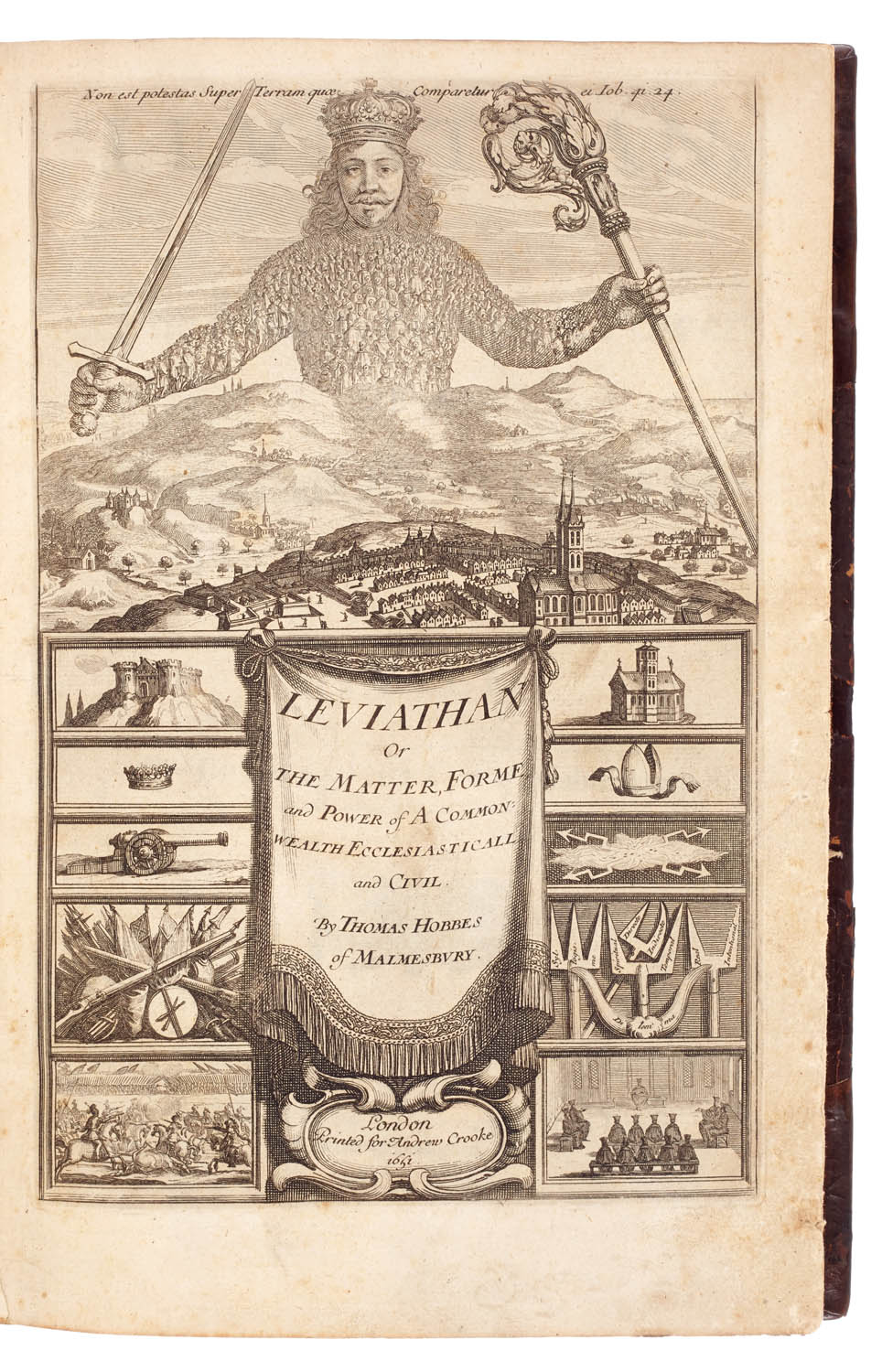 Added to your basket:
Leviathan, or the matter, forme, & power of a common-wealth ecclesiasticall and civill.

The true first edition – often referred to as ‘first edition, first issue’, but in fact the only first printing – of a milestone of political philosophy: the earliest English book to set out a complete political system, the first modern philosophical formulation of a social contract theory, and a work made almost universally iconic by its illustrated frontispiece, perhaps the most famous graphic representation of a political theory.

The idea of the necessity of a State authority as a remedy to the brutal anarchy of the natural condition (‘Man to Man is an arrant Wolfe’), and the associated idea of political representation, were the conceptual foundation of enlightened monarchies throughout Europe: while the legitimate source of power is the people, its exercise pertains to the monarch, the people’s designated representative. ‘This book produced a fermentation in English thought not surpassed until the advent of Darwinism. Its importance may be gauged by the long list of assailants it aroused. It was placed on the Index Librorum Prohibitorum 7th May 1703, though all Hobbes’s works had previously been condemned in toto, and it still remains a model of vigorous exposition, unsurpassed in the language’ (Pforzheimer).

‘Thomas Hobbes of Malmesbury is a unique figure in the history of English political thought. His defence of absolutism, unpopular from the day it was published to the present, is based on expediency. The individual (except to save his life) should always submit to the State, because any government is better than the anarchy of the natural state. Though his ideas have never appealed to proponents of the individual rights of man or to the modern totalitarians with their mystical vision of Volk, the fundamental nature of Hobbes’s speculation has stimulated philosophers from Spinoza to John Stuart Mill’ (PMM exhibition catalogue, 272).

The second edition, produced abroad with a false imprint, has a device on the title of a bear clasping foliage; the third, which was actually printed about 1680, has modernised spelling, a triangle of type-ornaments in place of the device, and a much worn impression of the original engraved title.

Provenance: this copy belonged to the novelist Joseph Henry Shorthouse (1834-1903). It is worth noting that Shorthouse’s first and most famous work, John Inglesant (finished and privately printed by 1876 but published commercially only in 1881), is a historical novel set in Hobbes’ times. It has been described as ‘one of the best examples of the philosophical romance in English literature’ (Britannica). The main character expounds Hobbes’ political and religious points of view, and quite explicitly declares at one point, ‘We had first the authority of a Church, then of a book, now Mr Hobbes asserts the authority of reason’ (p. 292).

A Defence of Dr. Price, and the reformers of England.

First edition of this moderate radical pamphlet arguing for the legitimate rejoicing of English liberals in both the French Revolution and the success of the American Republic, without their possessing any invidious feeling towards the English constitution: for evidently the Bourbon monarchy was tyrannical; and in any case, different governments are suited to different climates.

A Postscript to the letter, on libels, warrants, &c. In answer to a postcript [sic] in the defence of the majority, and another pamphlet, entitled, considerations on the legality of general warrants.

First edition, likely the first of four issues in 1765, this with the error in both pagination and the title. This Postscript to John Wilkes’s Letter concerning libels of the same year and Charles Lloyd’s Defence of the majority (1764) is often attributed to Almon, who published Wilkes’s work. It rebuts criticism of the Letter and makes additions to the second and third editions.