Small 8vo., foliated [2, list of chapters, in a different hand], 124, [11, index], with a final leaf, probably originally an endpaper, of later notes on the decisions in certain cases; in excellent condition, in a very neat and clear hand, nicely rebound in unlettered sheep.

Sir Thomas Hope of Craighall (1573-1646) was called to the Scottish Bar in 1605 and soon rose to prominence. Following the accession of Charles I he became Lord Advocate and was in high favour with the King. He compiled an extensive collection of notes on statutes and cases in about 1633 (published by the Stair Society in 1937), and probably about the same time wrote this concise manual to the law of Scotland.

There are twenty-four chapters, dealing mainly with property and inheritance but also with legal procedures. Chapter 4 concerns executors ‘testamentar or dative’ (that is, whether appointed by a will or by a court); Chapter 6 ‘Of bands Harell & movell [contracts heritable and moveable] and there distinctions’; Chapters 8-14 the several sorts of heirs – spouses and children, male and female, wards, and bastards – and the order in which they succeed to an inheritance; Chapters 15-22, mainly jurisdiction and procedures; Chapter 24 ‘Of tailzies bands [entailments] & contracts of tailzies & of breakeing & improving yrof’.

This treatise was published in Edinburgh by Thomas Ruddiman as Hope’s Minor Practicks in 1736, when it was still of much use because the Scottish legal system was very different from the English even after the Act of Union.

A copy at the Clark Library, lacking the useful index, is dated 27 December 1669.

Observations on Mr. Whitbread’s Poor Bill, and on the Population of England: intended as a supplement to A Short Inquiry into the Policy, Humanity, and Past Effects of the Poor Laws, &c.

First edition of each work. The barrister John Weyland (1774–1854) ‘was a well-to-do man whose landed possessions were extensive enough for him to be a magistrate in three counties, Oxfordshire, Berkshire and Surrey’ (James, p. 372). In 1807, he wrote two works supporting the poor laws, entitled A Short Inquiry into the Policy, Humanity, and Past Effects of the Poor Laws and Observations on Mr. Whitbread’s Poor Bill. A third work on the subject, The Principles of Population and Production followed in 1815. The following year marked the appearance of his 500-page magnum opus, the controversial Principles of Population and Production, a work of sufficient merit to provoke an immediate reply from Malthus in his Additions to the Fourth and former editions of an Essay on the Principle of Population (1817). 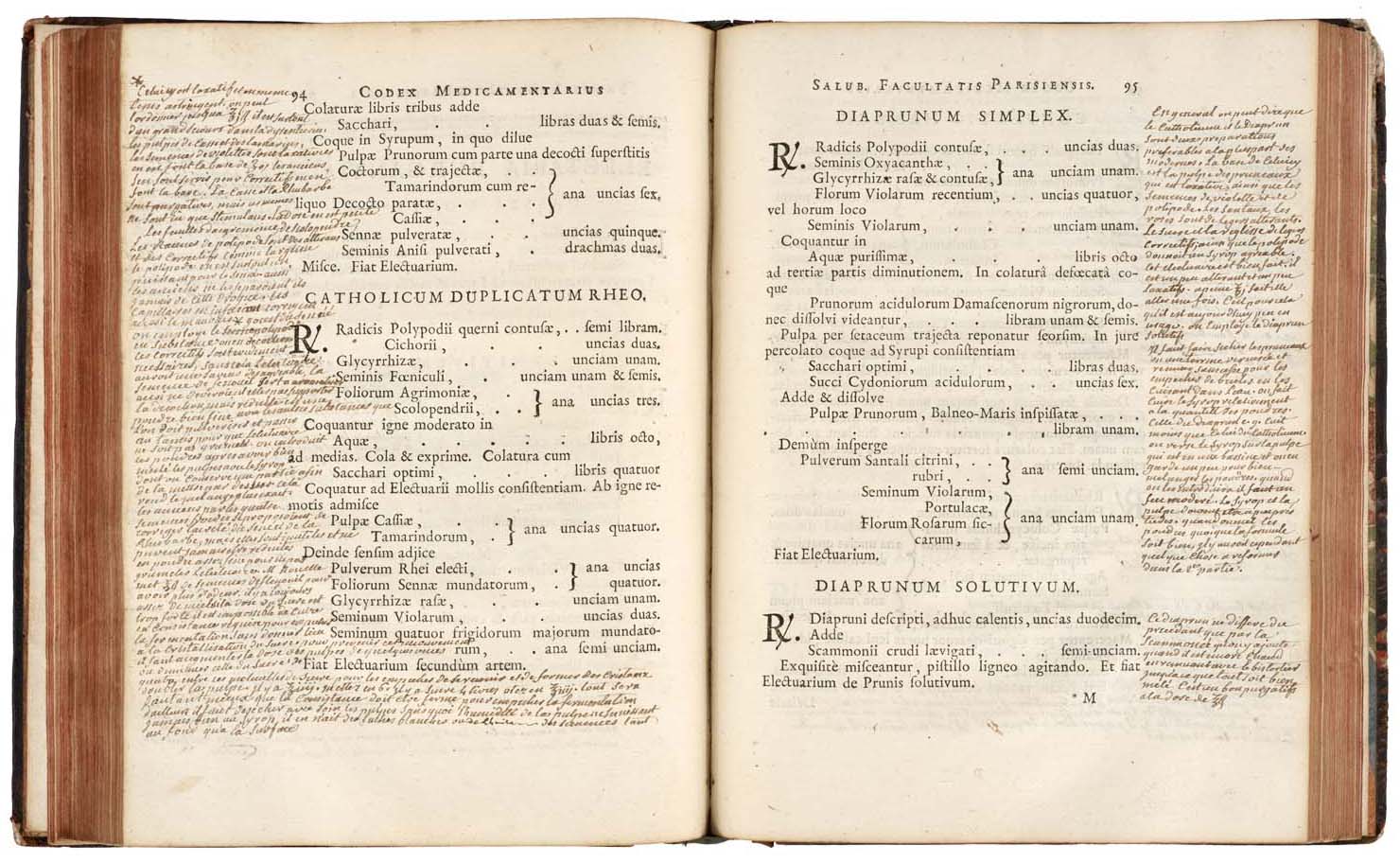 Revised and enlarged edition (first 1638) of the Parisian pharmacopoeia, edited by the dean of the faculty of medicine at the University of Paris, Jean Baptiste Thomas Martinenq (d. 1758), this copy greatly enhanced by extensive critical and analytical marginalia by an experienced near contemporary medical practitioner.