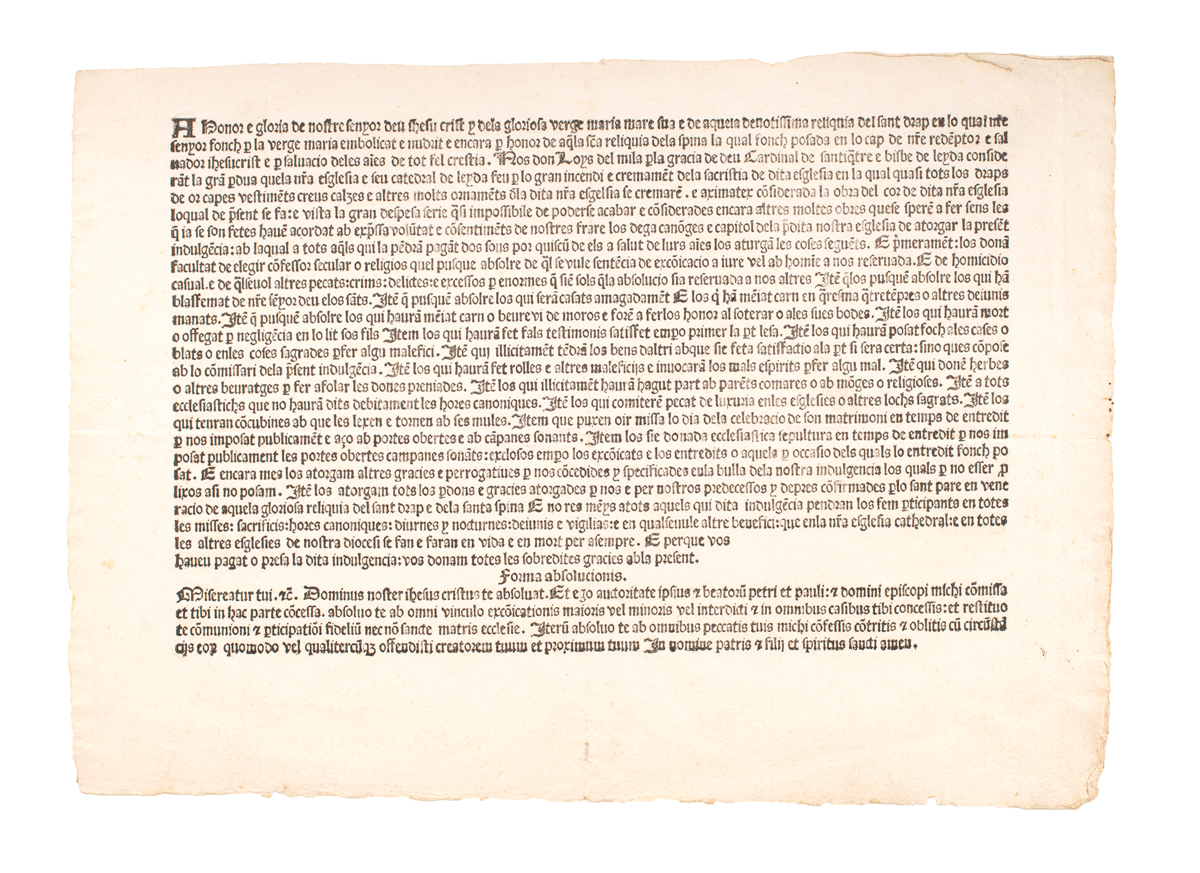 Added to your basket:
Letter of Indulgence (in Catalan), incipit ‘A Honor …’ granted by Luis de Mila, Bishop of Lérida.

An incunable indulgence granted by Luis de Mila, Bishop of Lérida, in favour of the living (as opposed to the dead, see below) to gather funds for the repair of the old Cathedral of Lérida, printed at Lérida, the second city of Catalonia, about one hundred miles inland from Barcelona.

The indulgence was printed by Heinrich Botel, who introduced printing to Barcelona and was responsible for the Aristotle of 1473, possibly the earliest book printed in Spain. In 1476 he moved to Zaragoza, and finally in 1470 to Lérida where he continued to print sporadically. This is the last known work from his press.

Only two other copies are known, at Barcelona and the Huntington Library. This copy was formerly item 653A in Maggs’ catalogue Bibliotheca Incunabulorum (1921).

The Saxon Heinrich Botel printed at least two settings each of two separate indulgences designed to gather funds for the rebuilding of the sacristy of the cathedral of Lérida. The difference between the two indulgences is that one (as here) is for the living (promising, that is, absolution for various sins, some of them specified) and the other for the dead (for whose souls commemoration in prayers, masses, offices of the dead, etc., was purchased by relatives). The two versions are easily distinguished by the first words, ‘A exaltacio’ for the dead and ‘A honor’ for the living, and the ensuing texts. In the case of that for the dead, two copies survive with two settings of each printed one above the other on one side of a folio half-sheet, the upper in 24 lines and the lower in 23 lines.1 The same type (Botel’s 104G) is used for the two settings of the indulgence for the living, both of them in 31 lines, which are found one above the other in a single copy in Barcelona;2 the first setting only is further found in this copy and another at the Huntington Library, California.3 In summary, there are three copies known of the first indulgence for the living (Quaritch, Huntington, Barcelona AHM), one only of the second (Barcelona AHM); of the two indulgences for the dead, two copies are known of the first (Cambridge and Lérida) and three of the second (Library of Congress, and the twins of the first at Cambridge and Lérida).

The indulgence is issued in the name of Cardinal Luis Juan de Milá, Bishop of Lérida (Lleida, in Catalan) and one of the most powerful churchmen of the latter half of the fifteenth century. His mother was Caterina de Borja, the sister of the Alonso de Borja who became Pope Calixtus III on 8 April 1455. Luis de Milá was already by that stage Bishop of Segorbe (near Valencia), from 1453 until his translation to the see of Lérida on 7 October 1459. He retained that bishopric even after becoming cardinal priest of SS. Quattro Coronati (‘Cardinal de santiquatre’ in the indulgence) in September 1456, a position held by Calixtus III until his elevation to the papacy. This first creation of his uncle’s reign also saw his younger cousin Rodrigo Borgia, later the infamous Alexander VI, made cardinal deacon by the familiar Renaissance practice of papal nepotism. Luis de Milá remained a cardinal for more than fifty years, dying in 1508 as the senior member of the college.4

We have apparently good documentary evidence on the circumstances that gave rise to this set of indulgences. The sacristy of the cathedral of Lérida had burned down in 1473. In this ‘gran incendi e cremament’, as the indulgence puts it (line 4), a great many articles of priestly attire and church ornament were lost. A passage in Jaime Villanueva’s Viage literario of 1851 says that the author had seen a decree of 1497 issued by Juan of Aragón, the king’s lieutenant in Catalonia. The decree ordered the revenues of the bishop to be sequestered at the instance of the chapter of the cathedral, frustrated that throughout the bishop’s long tenure the sums designated each year for the repair of the sacristy had never been applied to that purpose. As a result Bishop Milá offered to pay 6,000 sueldos (in Catalan, sous)5 towards the repairs on 22 November 1498, in the same year issuing a printed decree granting indulgences to those who contributed to this pious work.6

This, then, is clear enough proof that the four indulgences (and possibly others now lost) were at least first printed in 1498. They are thus by some way the latest known products of the printer Botel’s career, his last dated book being of 1495 and nothing further, apart from the indulgences, plausibly datable later. Heinrich Botel of Einbeck in Saxony, a priest as well as a printer, had been involved in some of the earliest books printed in Spain. He undertook to teach two other Germans the art of printing at Barcelona in 1473 and the Aristotle that was then produced (GW 2371) is the first book known to have been printed in that city. By 1476 Botel had moved to Zaragoza and printed there with various companions before repairing to Lérida in 1479. In the Catalan city, situated between Barcelona and Zaragoza, some 90 miles from each, he began printing independently and without competitors for the first time, issuing a local breviary on 16 August 1479.7 His production thereafter was intermittent and not copious (a total of nineteen books and seven indulgences, in Latin, Catalan, and twice in Spanish), which suggests that his press was not continuously active and that he had other employment as occasion offered.8 Botel’s name does not appear after the Sagramental of 5 November 1495 (BMC X 46); but unless an anonymous successor was using his types in these Catalan indulgences, he was still at work late in 1498.

The text of the indulgence itself is interesting for the extensive list of sins for which the purchaser of this document (at a cost of two sous, line 8) could have absolution through a confessor: involuntary homicide, blasphemy, getting married in secret, eating meat during Lent or eating meat or drinking wine [sic] that belonged to Moors, killing or suffocating by negligence one’s children in bed, perjury, arson, theft, invocation of evil spirits, abortion, having illicit relations with female relatives or nuns, failing to say the required canonical hours (for the religious), committing the crime of luxury in churches, keeping concubines (provided that they leave them and return to their wives), hearing Mass during one’s marriage in time of interdict or giving church burial while under interdict (publicly imposed by the bishop with the cathedral doors open and the bells ringing). All pardons and graces granted by the bishop’s predecessors are here confirmed in veneration of the glorious relics of the Holy Cloth and the Holy Thorn. It is not clear whether these relics survive in the Seu Vella of Lérida, a fine example of the Transitional style between Romanesque and Gothic architecture, dating from 1203 but much abused as a garrison for more than two centuries until the mid-1940s. The Holy Cloth, as the first two lines of the indulgence tell us, was a fragment of Christ’s swaddling-clothes:9 indeed a rarissimum incunabulorum.

3. Goff M-569; Goff’s references are confused, as his notes give one to understand that M-569 for the living and his M-570 for the dead were once two settings on the same sheet, and both are referred to Vindel’s reproduction and to Oates, each of which concerns the two indulgences for the dead. H. R. Mead, ‘Unique Spanish Incunabula’, Gutenberg-Jahrbuch (1950), 153-59 at pp. 154-55 gives details of the Huntington indulgence which confirm that it is the same as the Quaritch copy and also as the first in Barcelona AHM (IBE 3941: note 2 above). The present copy is that sold by Maggs Cat. 402 (1921), 653A, alongside 653B for the dead (see note 1 above), and registered in Goff M-569 as in the hands of the bookseller John Fleming of New York. Mead was wrong to say (p. 154B) that the Huntington copy, in fact bought from A. S. W. Rosenbach in 1925, was that offered by Maggs.

9. … aquela deuotissima reliquia del sant drap en lo qual nostre senyor fonch per la verge maria embolicat e nudrit … (‘that most venerable relic of the Holy Cloth wherein our Lord was wrapped and fed by the Virgin Mary’). The relic was examined on a visitation of the Cathedral in 1535 (Villanueva, Viage literario, doc. XVI, pp. 266-67).