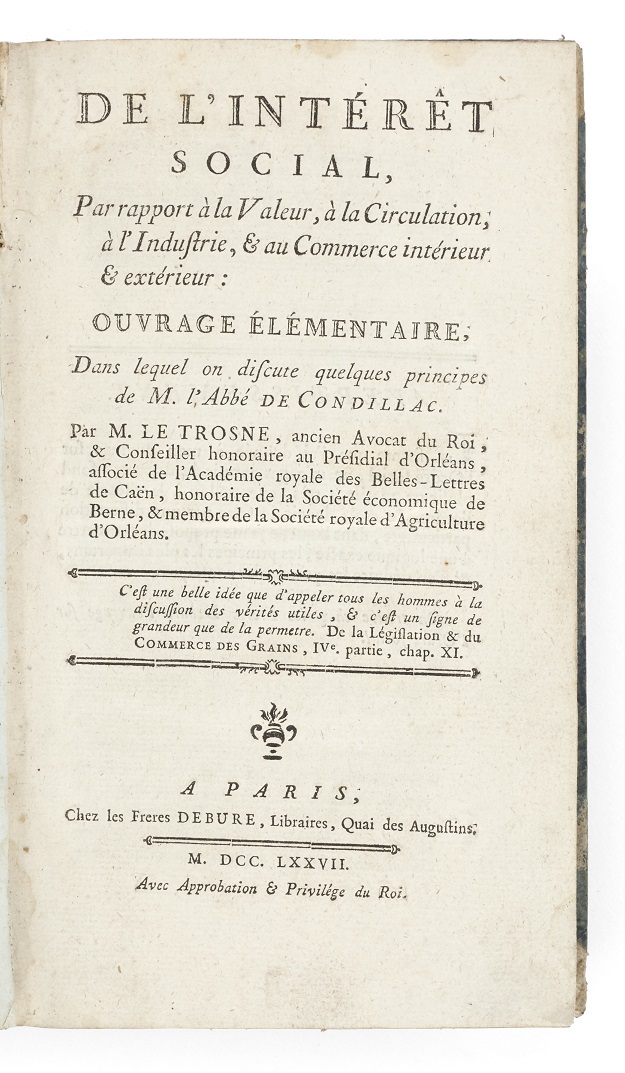 Rare first edition of Le Trosne’s most specifically economic work, which also appeared as the second part of De l’ordre social and was issued in conjunction with it (with the title-page of De L’ordre modified to contain reference to this). De l’intérêt social is, among Le Trosne’s publications, one bearing ‘major economic content, with its discussion of value, circulation, money, industry, and domestic, foreign and colonial trade […]. [It] is particularly noted for its theory of value, which distinguishes its various determinants such as usefulness, tastes, relative scarcity and competition but which identifies necessary expenses of production as the major influence on value, hence the name fundamental price. To analyze value effects on production and wealth Le Trosne distinguishes various value forms linking, for example, the excess of the price received for produce by the farmer over costs, to accumulation and the increase of wealth. Other roles for these complex value relationships are illustrated in Le Trosne’s perceptive discussion of exchange, money, circulation, the sterility of industry and the benefits of trade for an agricultural nation’ (Palgrave).

INED 2871; Mattioli 1965 (and see Mattioli 1966 for a sequencing of the issues of De l’ordre and De l’intérêt)’ see Goldsmiths’ 11539. Rarely to be found on its own particularly in a contemporary binding.

First edition of de Wree’s authoritative catalogue of Flemish seals, an attractive copy in contemporary vellum gilt. Exquisitely engraved by Samuel and Adriaen Lommelin and François Schelhaver the elder and younger, the illustrations offer an accurate and elegant record of the seals of the counts of Flanders from Baldinus in the ninth century to the contemporary Philip IV.