Together 2 works in 3 vols, uniformly bound in contemporary Dutch mottled calf, spines gilt in compartments, one with traces of lettering-pieces, one in second work numbered directly in gilt. others with central gilt fleurons enclosed by floral sprays, all edges speckled red; endpapers of second work replaced, a little rubbed and bumped, shaken, causing one map to detach and some quires to loosen, old repairs at spine-ends, lacking lettering-pieces, nonetheless a very crisp copy; provenance: occasional early annotations or corrections throughout – early reading notes in Dutch and Arabic on rear flyleaves, endpapers, and ll. tipped onto stubs of excised final [?blank] ff. in the first work and first vol. of the second work.

First Dutch editions in a uniform binding. Described by H.SJ.B. Philby as ‘the father of Arabian travel’ (The Heart of Arabia (1922) I, p. xv), the German-Danish traveller and writer Niebuhr (1733–1815) was born in Lauenborg, and lost both of his parents at a young age. A modest inheritance enabled him to study mathematics in Hamburg and then attend the University of Göttingen. In 1757 he enlisted into the corps of Hanoverian engineers and in 1760 he was invited to join a scientific expedition proposed by the Hebrew scholar Johann David Michaëlis of Göttingen University and sponsored by Frederick V of Denmark. Accompanied by the Swedish natural historian Peter Forrskål, F.C. von Haven (a Danish linguist and orientalist), C.G. Kramer (a Danish physician and zoologist), the German artist Georg Baurenfeind, and the other members of the party, Niebuhr set sail for Constantinople on the Danish warship Grönland in February 1761, and from Constantinople the expedition travelled onwards to Alexandria, to commence its explorations.

‘They spent a year in Egypt, ascending the Nile and visiting Suez and Mount Sinai. Disguised as pilgrims […] they left Suez in October 1762 for Jiddah, from where they advanced down the coast in a tarrad (open boat), making frequent landings as far as Al Luhayyah […]. They then travelled along the coastal plains on donkeys as far as Bayt al Faqih, but during this part of the journey Niebuhr and von Haven contracted malaria. Forrskål diverted into the hills to collect herbs. By way of Zabid they reached Mocha […], where the authorities destroyed Forrskål’s specimens and von Haven died […]. Leaving Mocha on 28.6.63 they made their way inland to Ta’izz and Yarim, where Forrskål died of malaria […], then to Dhamar and San’a […], where, after two days house arrest, they were received graciously by the Imam with gifts of money. From San’a […] they arrived back in Mocha on 5.8.63. While there, all four of the survivors collapsed with fever and had to be carried on board a vessel bound for Bombay. On the voyage Baurenfiend and Berggren [a Swedish former soldier] died, to be followed by Kramer in February 1764, leaving Niebuhr, who by that time had adopted native dress and diet, as the only survivor. Niebuhr remained in India until the autumn of 1764, then sailed from Bombay to Muscat […], where he boarded a small English frigate for Bushire […]. From Bushire he set off overland through Shiraz, Persepolis, Babylon, Baghdad, Mosul and Aleppo. […]. On instructions from the Danish Royal Court, Niebuhr then continued his travels to Cyprus with orders to copy the Phoenician inscriptions there. From Cyprus he proceeded to Jerusalem (1766) in the company of Franciscan monks bringing the annual alms from Malta to Jerusalem. Niebuhr described the town and its inhabitants in minute detail and made a map of the surrounding area. Continuing northward along the coast, he crossed the Taurus Mountains of Turkey to Brusa and Constantinople (February 1767), then made his way homeward through Poland and Germany. He arrived back in Copenhagen on 20.11.67 after an absence of seven years’ (Howgego).

In Denmark the government funded the engraving of plates to illustrate his travels, which were then gifted to Niebuhr, and he began work on his official report, which was first published in German as Beschreibung von Arabien aus eigenen Beobachtungen und im Land selbst gesammleten Nachrichten abgefasse (Copenhagen, 1772), translated into French in 1773, and then Dutch as Beschryving van Arabie in this edition. This work forms ‘a compendium of the Arab world’ (R.H. Guichard, Niebuhr in Egypt: European Science in a Biblical World (2013), p. 312); the first part is a general description of Arabia, its political boundaries, agriculture, science, social mores, etc., and the second is dedicated to individual provinces, including Yemen, the Hejaz, the Hadramaut, Najd, Oman, and Sinai, based either on his own observations when he had visited an area, or those of Arabs familiar with the area. Each member of the expedition had been obliged to keep a journal, but only Niebuhr survived, and his journal was the foundation of a second work on the East, Reisebeschreibung nach Arabien und andern umliegenden Ländern, which was published in two volumes (Copenhagen, 1774-1778), and then this Dutch translation and a French translation were both published simultaneously in Amsterdam and Utrecht by S.J. Baalde and J. van Schoonhoven (1776) and S.J. Baalde and Bartholomeus Wild (1780). 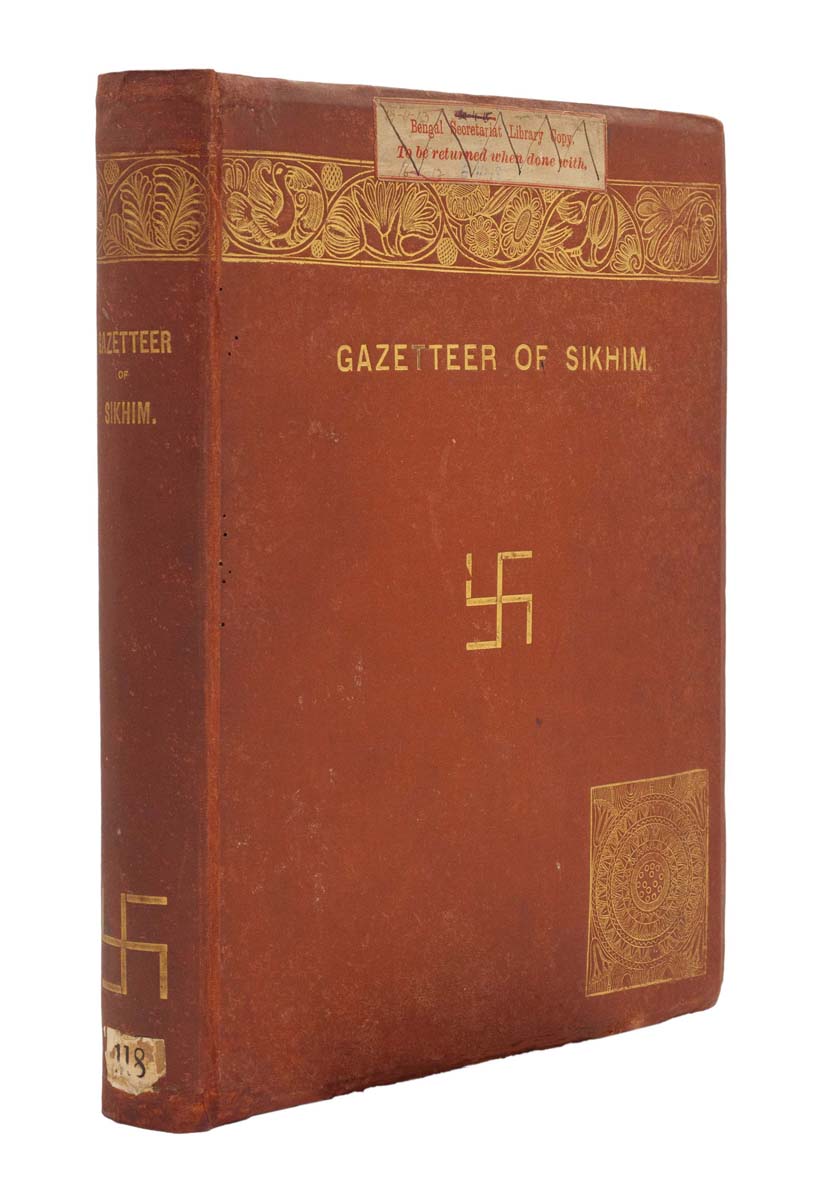 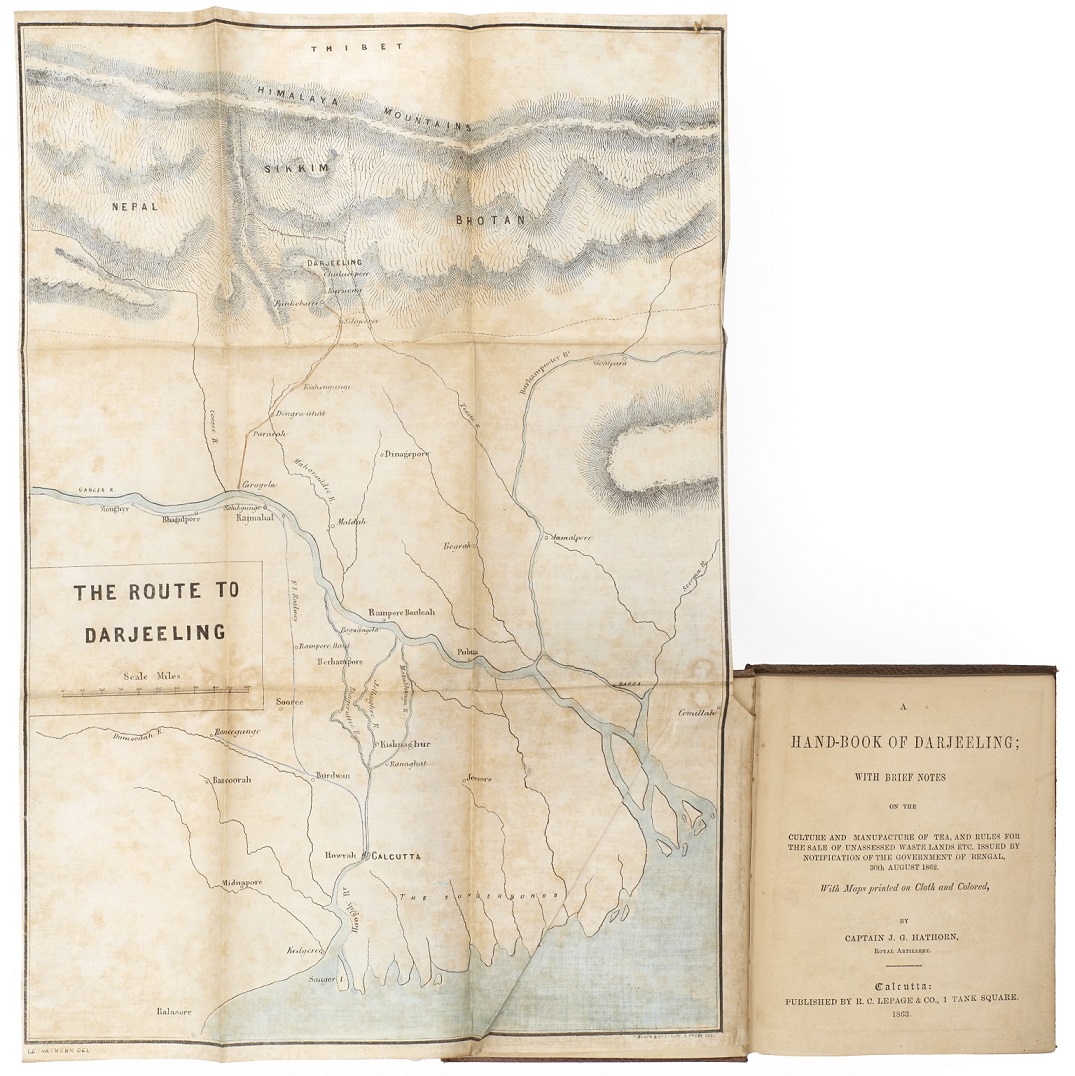 WITH A CHAPTER ON THE CULTIVATION OF TEA HATHORN, James George.

A hand-book of Darjeeling; with brief notes on the culture and manufacture of tea, and rules for the sale of unassessed waste lands etc. issued by notification of the government of Bengal, 30th August 1862. With maps printed on cloth and colored ...

Scarce first edition of this guide to Darjeeling by Hathorn (1826-1868), a Captain in the Bengal and then Royal Artillery. The wide-ranging contents cover, inter alia: the journey from Calcutta to Darjeeling; a geographical and political description of British Sikkim; a description of Darjeeling including its hotels, schools and shops, its climate and weather, its convalescent depot and mission, and its natural history; the settlement of Hope Town; the culture and manufacture of tea (pp. 118-135) and the experimental cultivation of the quinine plant; the hill tribes of Sikkim; and a charming month-by-month ‘Gardener’s calendar for Darjeeling’.