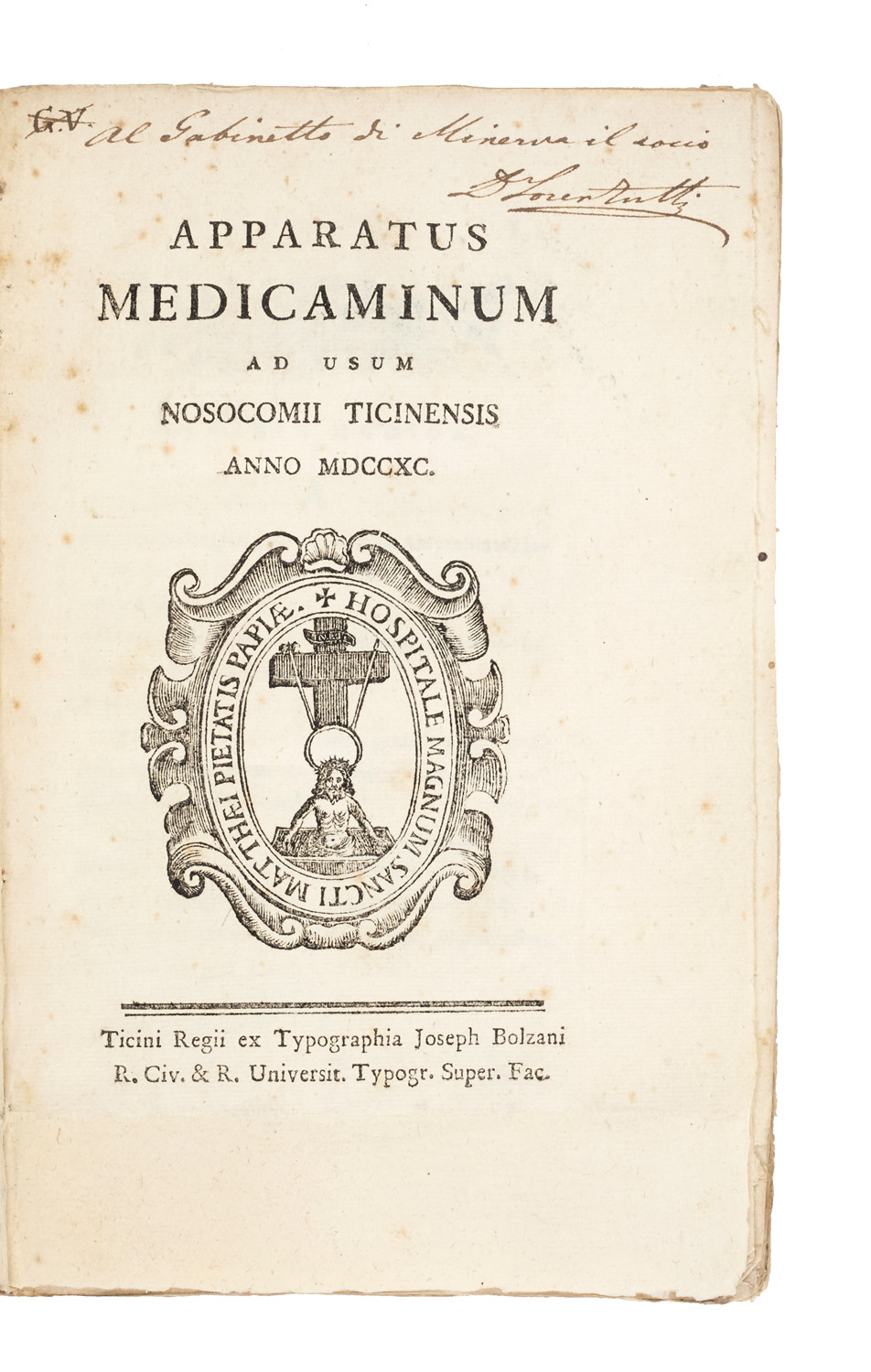 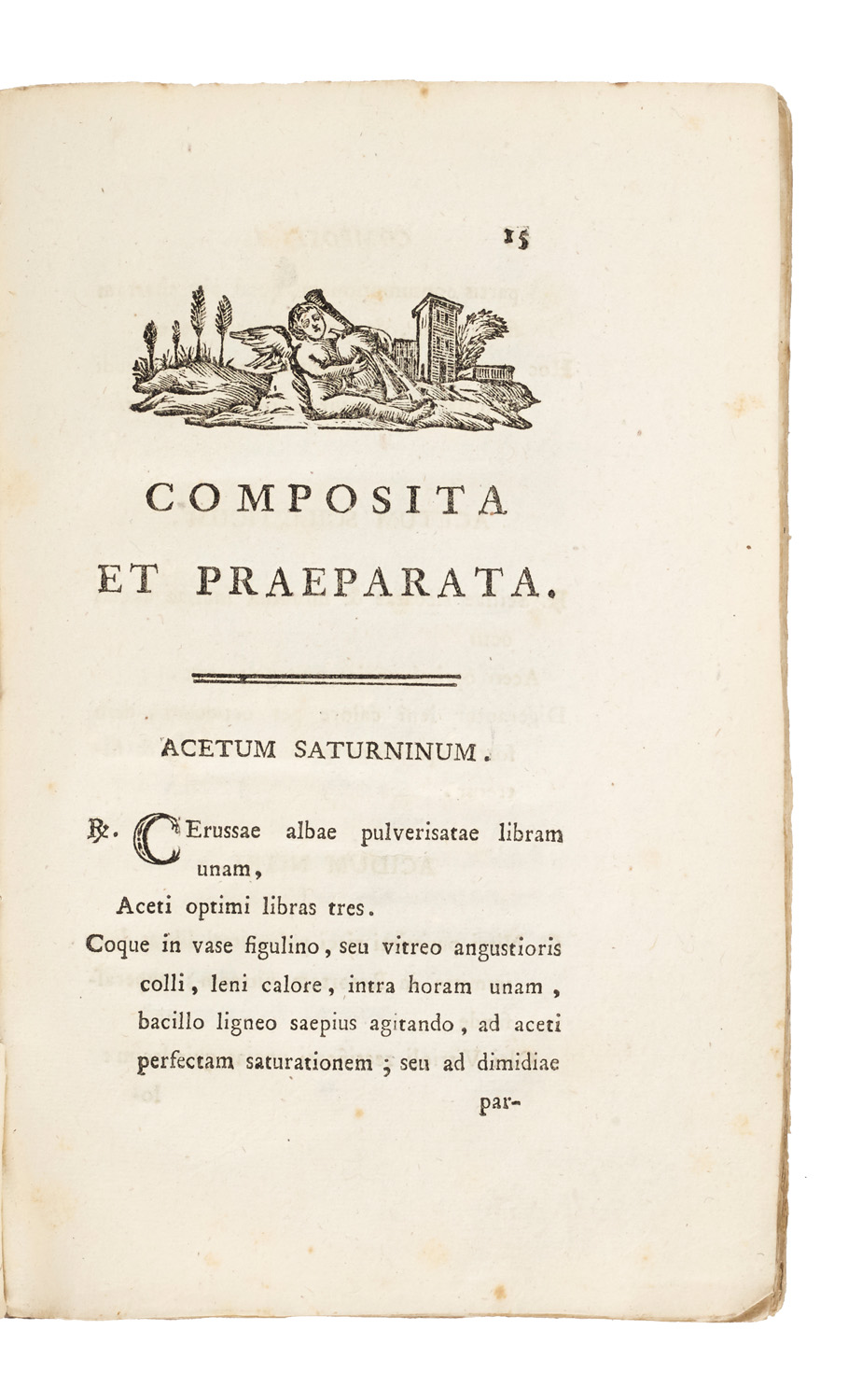 Very rare first edition of this pharmacopoeia for use at the Ospedale Grande di San Matteo, also known as the Pietà, in Pavia, one of the foremost medical schools in Europe at the time of this publication. Founded in 1449, the Ospedale remained the centre of healthcare in the city for almost five centuries, the buildings now forming part of the University of Pavia. Opening with a list of materia medica, the Apparatus contains 161 receipts, arranged alphabetically, detailing the ingredients and measures for all manner of poultices, electuaries, elixirs, plasters, draughts, mercuries, oils, pills, powders, spirits, syrups, tinctures, and unguents.

Provenance: inscription to title ‘Al Gabinetto di Minerva il socio Dr Lorenzutti’ i.e. most likely from the library of Dr Antonio Lorenzutti (b. 1806). Lorenzutti studied medicine and surgery at Vienna, Pavia and Padua, before working in Trieste hospital and serving as director, librarian and archivist of the Gabinetto di Minerva. Lorenzutti gave a funeral oration for Dr Giovanni Vordoni of Trieste (d. 1830), and it may be his initials ‘G.V.’ that appear here on the title.

OCLC shows Wisconsin only in the US; no copies on Library Hub. A different edition of the same year printed ‘apud Joseph Galeatium’ is at the Wellcome). 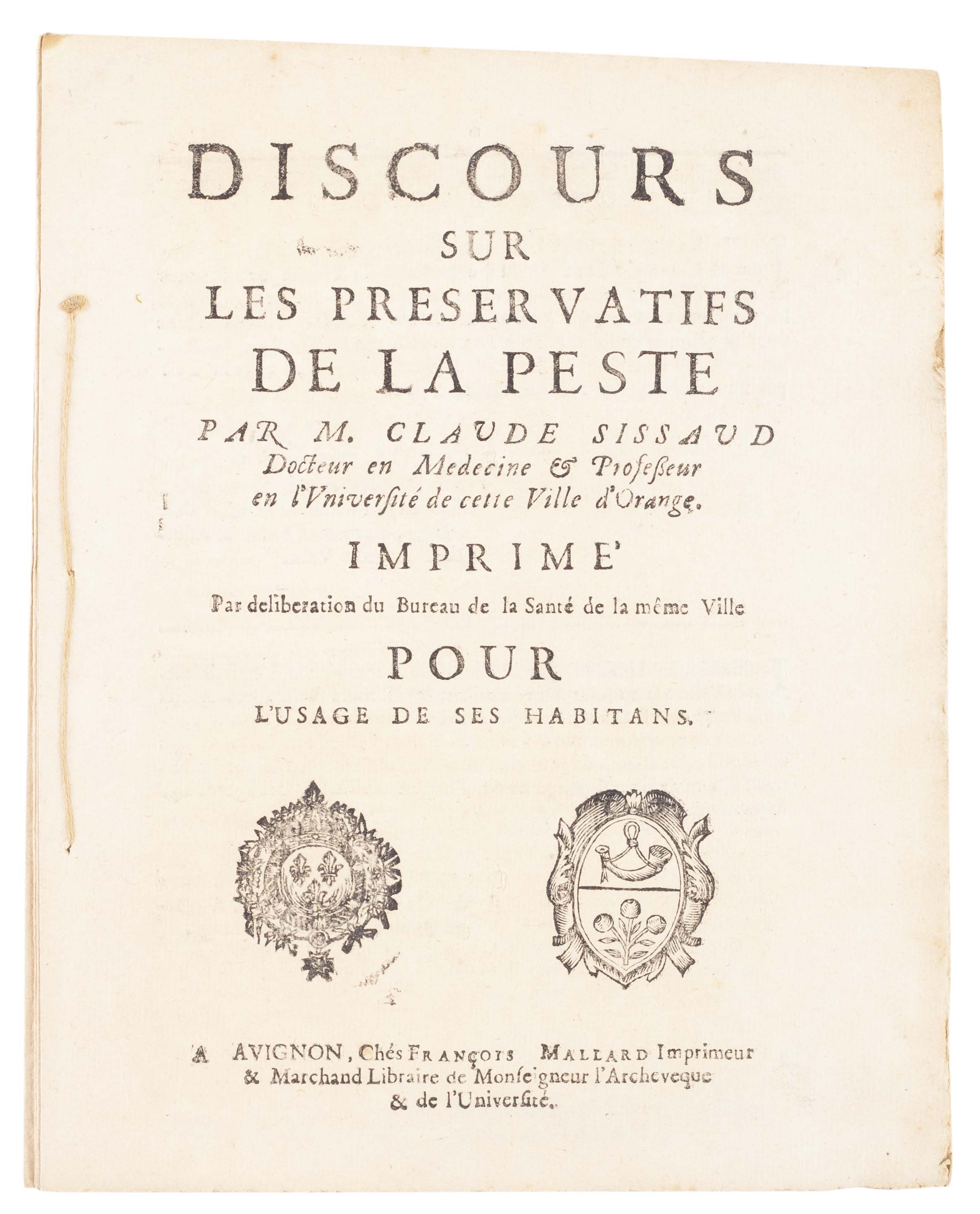 A rare pamphlet advising the inhabitants of the town of Orange, in the south of France, on preventing the spread of plague from nearby Marseille, by the doctor and university professor Claude Sissaud. Published three-hundred years ago, much of the advice is resonant to the modern reader living with the COVID-19 pandemic. The Great Plague of Marseille was the last major outbreak of bubonic plague in western Europe, claiming 100,000 lives in the city and surrounding areas.

HANDS – THE WINDOWS TO THE SOUL BUÉ, Hector-Joseph dit Alphonse.

First edition of this rare curiosity devoted to the physiognomy of the hand, in which Bué advocates the careful study of the hands as the key to a person’s true character and nature. Starting from the premise that the hands are the most expressive part of the body, Budé examines the conclusions to be drawn from the colour, texture and temperature of an individual’s hands, the thickness, shape and size of their fingernails, their hands’ overall size and proportion, and the form of each individual finger. The work concludes with twelve aphorisms under the heading ‘Ma philosophie’. Bué followed La main with a similar work devoted to Le nez (1872), but returned to the hand in his 1889 analysis of La main de Général Boulanger.