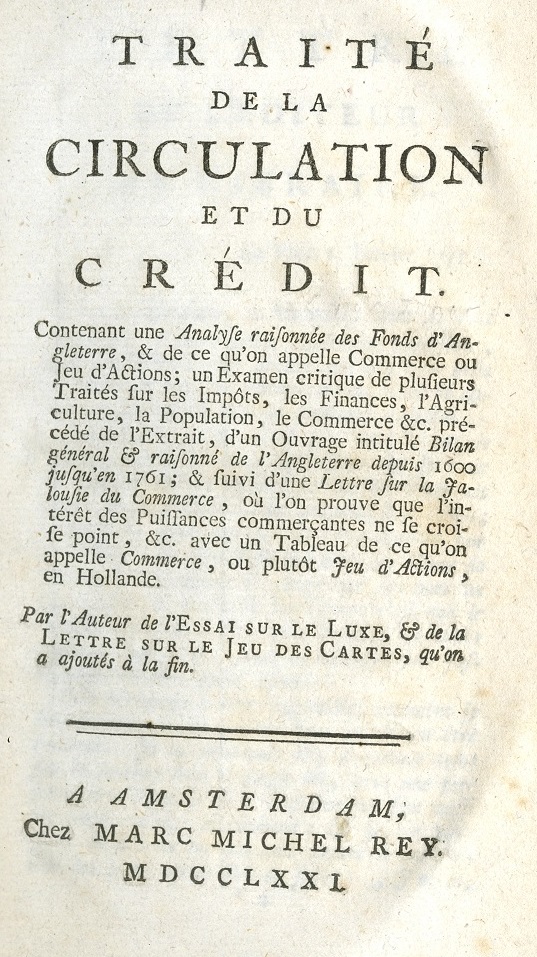 Pinto confronts a number of contemporary authors on the subject: Berkeley, Hume and Petty, but also Boisguilbert, Buffon, Colbert, Diderot, Mirabeau, Rousseau and Voltaire. Pinto had in mind a ‘European economic model. [He] wanted above all to convince his readers of the soundness of the British system of public debt. With the adoption of improvements in the redemption policy proposed in his book, the system would achieve a high degree of perfection. In France the Physiocratic opinions of the elder Mirabeau in particular required Pinto to respond, and in England the otherwise admiring Hume was in disagreement. By means of a critical discussion of the work of these and other authors, Pinto propagated a financial policy that he thought would benefit both the State and the individual’ (Nijenhuis).

This copy has the extra interim half-sheet H* (pp. 8) titled Etat des Finances en Angleterre à la fin de la session du Parlement en 1770, not mentioned in Einaudi and not always present. The work excited much controversy on publication: it was translated into English by Rev. S. Baggs, and published with notes, in 1774.

Pinto (1715–1787) was born in Amsterdam. He was descended from a Portuguese Sephardic family and lived for some time at Bordeaux. ‘He then settled in Holland, where he soon made a large fortune and an equally great reputation. The Stathouder William IV (1747–51) had a very high opinion of his advice, both on administration and finance. He was as tolerant as he was high-minded, and his benevolence won him popularity’ (Palgrave).

[Drop-head title:] ‘An act for repealing the several duties of customs and excise, and granting other duties in lieu thereof, and for applying the said duties, together with the other duties composing the publick revenue; for permitting the importation of certain goods, wares, and merchandize, the produce of manufacture of the European dominions of the French King, into this Kingdom; and for applying certain unclaimed monies, remaining in the Exchequer for the payment of annuities on lives, to the reduction of the national debt.’