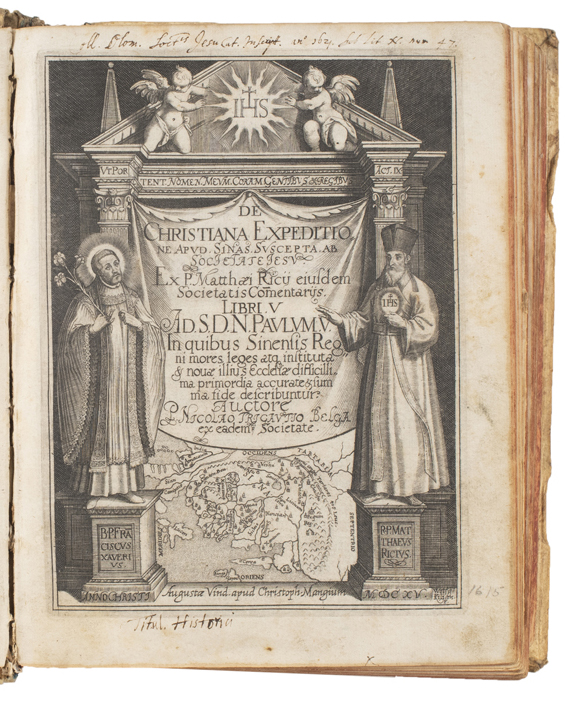 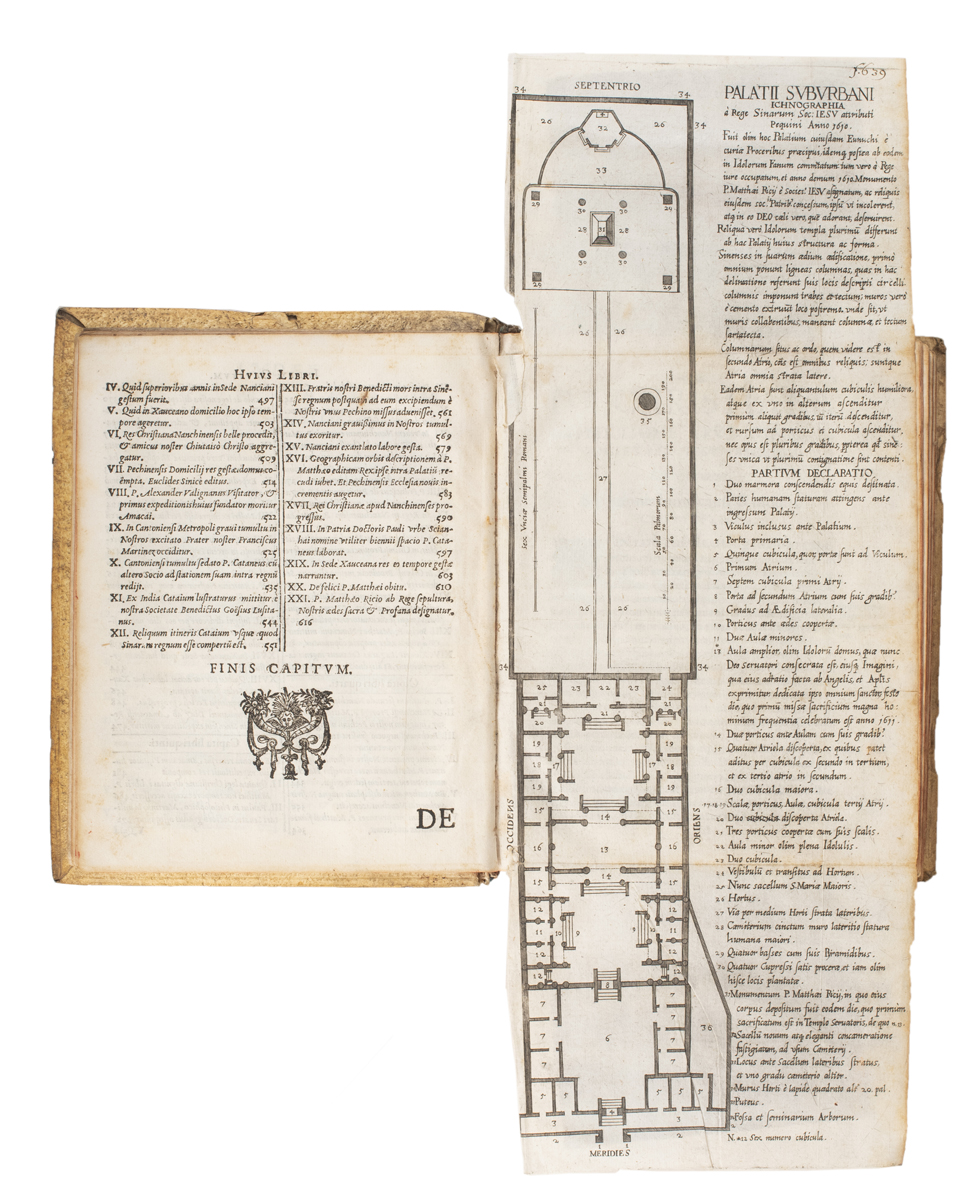 First edition. The ‘most influential description of China to appear during the first half of the seventeenth century. Trigault, the procurator of the Jesuits’ China mission, translated and augmented the pioneer missionary Matteo Ricci’s journal, aiming to elicit support for the mission. The De Christiana expeditione, therefore, is essentially a translation of Ricci’s Italian journal. Trigault, however, did not merely translate the journal; he omitted or changed many passages, rearranged its parts, and added material from other Chinese missionaries to complete the story and to depict China and the Jesuit mission in a more favorable light. The resulting volume contains a history of the Jesuit mission in China from its inception in 1583 until Ricci’s death in 1610, the same year in which Trigault arrived in China. It includes a wealth of information about China in the chapters which recount the history of the mission, prefaced by eleven chapters describing Chinese geography, people, laws, government, religion, learning, commerce, and the like. The De Christiana expeditione, despite its departures from Ricci’s original journal, provided European readers with more, better organized, and more accurate information about China than was ever before available’ (Lach III pp. 512-3). Three Latin editions had appeared by 1617, and translations were published in French (1616, 1617 and 1618), German (1617), Spanish (1621) and Italian (1622). Extracts in English were included in Purchas his pilgrimes (1625), but the first full edition in English, by L. J. Gallagher, did not appear until 1953. The Italian manuscript of Ricci’s original text remained unpublished until 1911.

‘The appearance of Trigault’s book in 1615 took Europe by surprise. It reopened the door to China, which was first opened by Marco Polo, three centuries before, and then closed behind him by an incredulous public, who received the greater part of his fabulous narrative as the beguiling tales of a capricious traveler … [It] probably had more effect on the literary and scientific, the philosophical and the religious, phases of life in Europe than any other historical volume of the seventeenth century … It opened a new world’ (Gallagher pp. xvii-xix).

POCOCKE’S CELEBRATED ACCOUNT FROM THE LIBRARY OF A MEMBER OF THE SOCIETY OF DILETTANTI POCOCKE, Richard.

A Description of the East, and some other Countries.

First edition, demy folio issue. The traveller and cleric Pococke (1704-1765), was educated at Corpus Christi College, Oxford, and graduated BA in 1725, BCL in 1731, and DCL in 1733. His family’s ecclesiastical connexions and his facility at navigating the complexities of clerical patronage enabled him to progress quickly through the established church, and in 1725 Pococke was appointed Precentor of Lismore Cathedral by his uncle Thomas Milles, the Bishop of Waterford and Lismore, and he became the Vicar-General of these dioceses in 1734; proceeding through the church hierarchy, he was appointed Archdeacon of Dublin in 1745 by Lord Chesterfield (the dedicatee of the second volume of A Description of the East), and was then Bishop of Ossory in 1756 by the Duke of Devonshire (Chesterfield’s successor). In June 1765 Pococke was translated to the bishopric of Elphin, and then translated again in July 1765 to that of Meath, before his sudden death of apoplexy in September 1765.