16mo, pp. 136; printed tables; browned throughout, some foxing; a good copy in the original printed-paper roan backed boards, rubbed and soiled, front joint split at foot, printer’s advertisement to the rear board; inkstamps of D.W. Griffith to both pastedowns.

Added to your basket:
The farmers and traders guide, showing at one view, the wholesale or retail value of any commodity from ¼ of a cent to $15 dollars in dollars and cents; with a variety of useful tables.

First edition. Pumpkintown, so called for its abundant crop of pumpkins, was a flourishing trade centre at the start of the nineteenth century, serving as a contact point for wagon trains, and attracting merchants from Charleston, Hamburg and Augusta who bartered city produce for livestock and farm products. The present work reflects Pumpkintown’s trading ethos, being intended for quick and easy reference during transactions, even for ‘a person quite unacquainted with arithmetic’ (introduction). With literacy rates still relatively low among travelling traders, text in the body of the text is kept to a minimum, and printed in a large type.

Chosen as the administrative centre for McMinn county in 1823, Pumpkintown is now part of present day Athens, Tennessee.

Pumpkintown imprints are extremely rare; in addition to this title, which appeared in two issues in the same year, the other in marbled boards, Worldcat finds only a printed collection of music for churches, and a guide to home medical remedies. 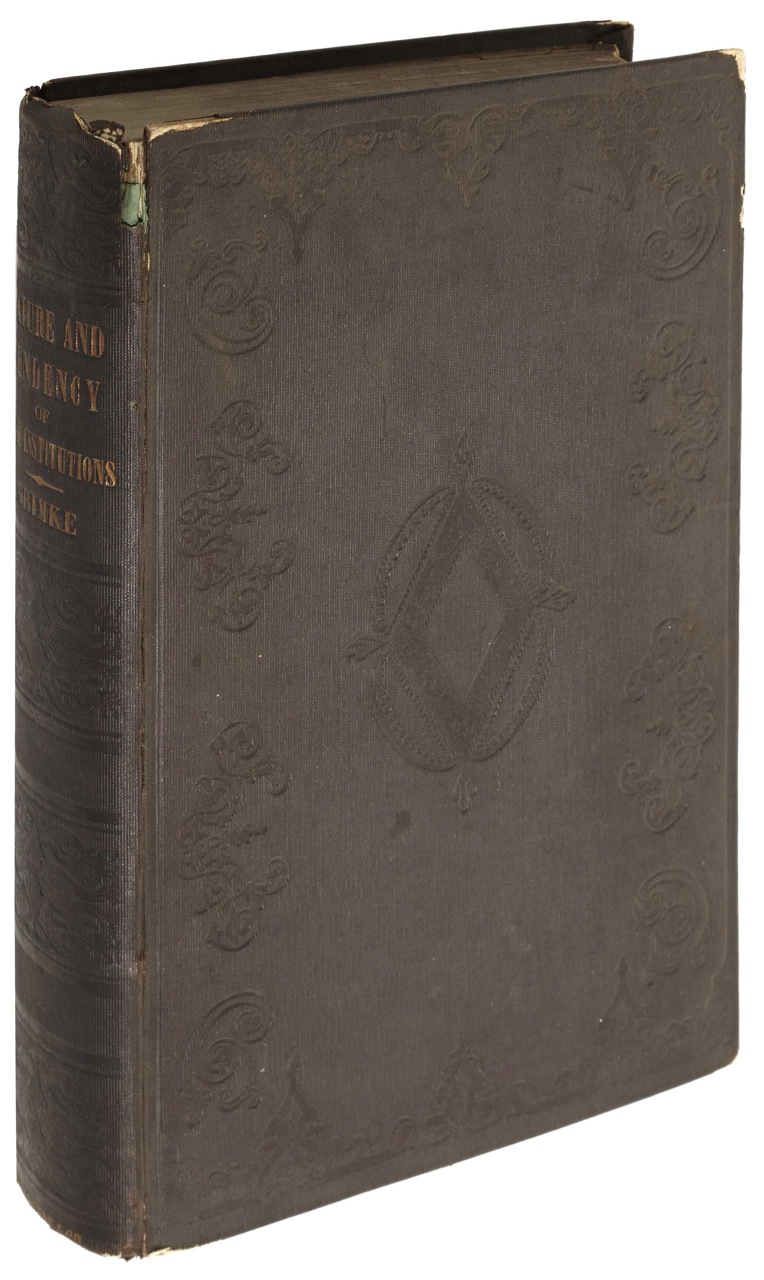 Considerations upon the nature and tendency of free institutions.

First edition, scarce in commerce, of this ‘significant contribution to American thought’ written by a Supreme Court judge who advocated the ‘popular election of judges for specific terms’ (Supreme Court of Ohio biographies online, ‘Grimke’). Grimke (1791-1862) studied at Yale and Carolina, rising quickly to become a judge of the Court of Common Pleas and then of the Supreme Court (‘Publisher’s Preface’ to The Works of Frederick Grimke, 1871). This work is divided into four books which treat government and elections, the constitution, institutions (medical, religious, military etc.), and the American constitution the context of European government.

Very rare first edition of this pioneering contribution to the systematization of economics as one of the pillars (along with, and integrated with law, administration and policing) of successful societies, by the philosopher, jurist, and economist Georg Heinrick Zincke (1692-1768).