Added to your basket:
Excursions in the mountains of Ronda and Granada, with characteristic sketches of the inhabitants of the south of Spain.

First edition; scarce. ‘When reviewing Excursions in the mountains of Ronda and Granada, Richard Ford described Captain Rochfort Scott as being one of “a new genus, the military traveller . . . riding rough horses, and writing rough notes . . . . The author, in his opinion, was entitled to rank amongst the most lively and entertaining when describing “the outside of a country, the face and form of nature, the salient characteristics of the lower orders, the ventas, the muleteers, and bullfights” . . . . Rochfort Scott had spent the greater part of the years between 1822 and 1830 with the garrison at Gibraltar, and subsequently, in 1833, he visited Madrid. It is not easy to follow his tracks on every excursion, and some may well have been amalgamated to form a continuous route’.

‘For Rochfort Scott the charm of travelling in Spain was that of novelty, for – and he was one of the first to say so – “every thing in that country is different from what is met with in any other; every thing is proverbially uncertain . . .”. Here there was no itinerary to detail where a relay of post-horses was to be found, no Hand-book for travellers, with a list of the best inns on the road, to spoil your appetite by anticipation”. “No – you travel with a bad map of the country in your pocket over a stony track that is not marked upon it – and which you are at times disposed to believe is rather the bed of a torrent than a road”: indeed, those who preferred “being dragged through the country at the rate of a mile a minute, powdered with soot, suffocated with steam, and sickened with grease . . . must abstain from travelling in Spain!” ’ (Robertson).

Charles Rochfort Scott (1797–1872) subsequently travelled in Greece and Syria, and in 1864 he was appointed Lieutenant Governor of Guernsey.

Provenance: John Rushout, 2nd Baron Northwick, Northwick Park, Gloucestershire (1769–1859), with bookplate. Rushout was one of the most distinguished British connoisseurs and antiquaries of the era. As a young man he had spent a year travelling in Spain, and he then moved to Italy in September 1793, where he lived until 1800, when his father’s death brought him back to England. 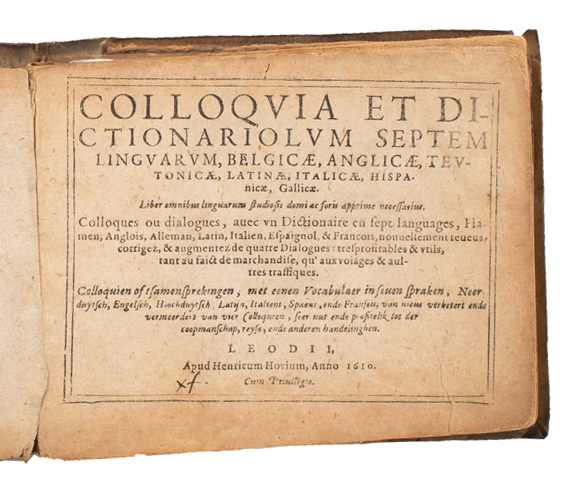 ‘I HAD RATHER DIE, THEN TO KISSE A MAN IN HIS BED’ [BERLAIMONT, Noël de.]

Scarce edition of an immensely popular multilingual phrasebook containing several amusing scenarios – from dinner parties gone awry to squabbles over the price of fabric – in seven languages, so that the reader might ‘not neede ony interpretour, but shal be able to speake them your self’.