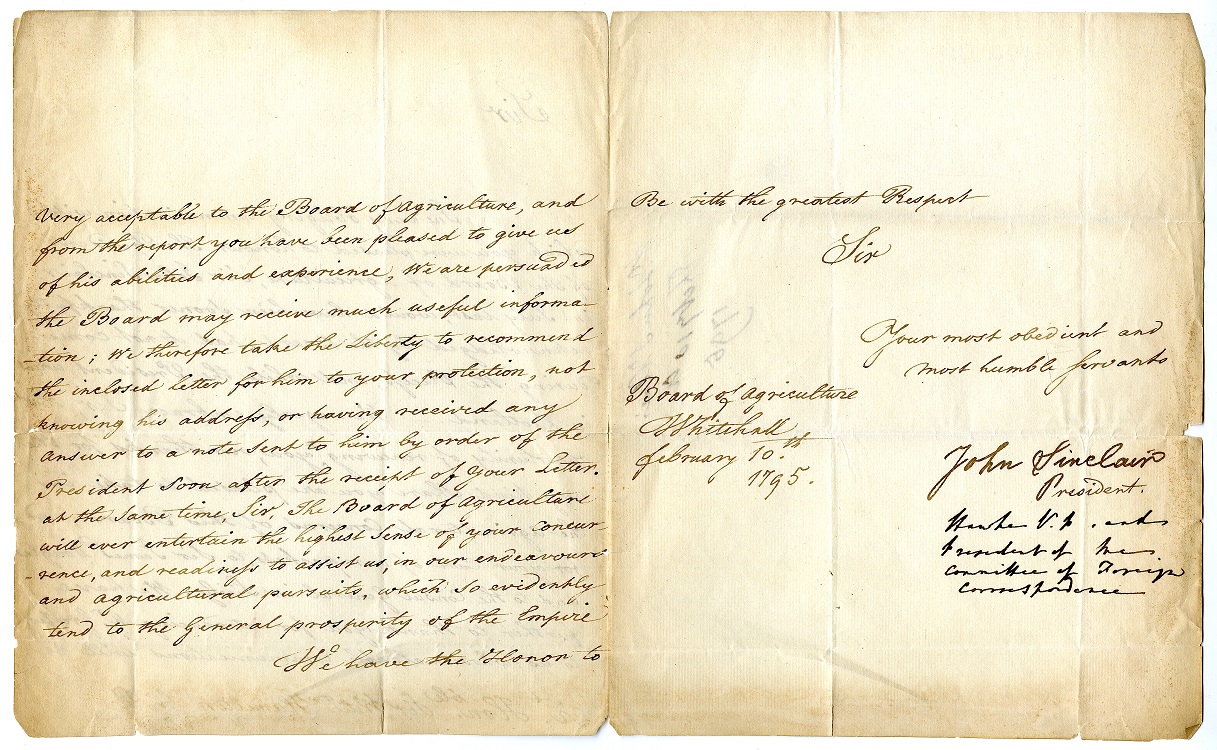 4to bifolium and 8vo leaf, pp. 3 + 1 blank; 1 + 1 blank; written in brown ink in neat secretarial hands and signed by Sinclair; some browning and small tears to 4to letter, creases where folded, otherwise good.

Added to your basket:
Two letters, signed ‘John Sinclair’, to Sir William Hamilton and to an unnamed recipient.

Two interesting letters written by Sinclair as president of the Board of Agriculture and during his campaign against the 1810 report of the bullion committee.

The first letter was sent by the Board of Agriculture to the diplomat Sir William Hamilton (1731-1803) and is signed by Sinclair as its president, and by Lord Hawke ‘V.P. and President of the Committee of Foreign Correspondence’. The letter thanks Hamilton for his communication of the previous July, left unanswered due to Sinclair’s absence in Scotland, for forwarding packets to Sir James Douglas and the Consul General in Sicily, and for introducing Mr Graefer. Hamilton is asked to forward a letter from the Board to Graefer, and the letter ends with appreciation for his ‘readiness to assist us, in our endeavours and agricultural pursuits, which so evidently tend to the general prosperity of the Empire’. John Andrew Graefer, here referred to, was a horticulturalist and landscape gardener who worked with Hamilton in Naples and who later served as steward of Lord Nelson’s Bronte estate. The Board of Agriculture was established by William Pitt in 1793 with Sinclair as its unpaid president. Under his presidency the board published two surveys of British counties, promoted experiments in field drainage and farm equipment, and gave advice on the management of the food shortage of 1795.

The second letter was sent by Sinclair with a copy of his pamphlet Observations on the report of the Bullion Committee (1810) to an unnamed member of that committee. ‘I believe that we differ in opinion’, Sinclair writes, ‘but I hope that in course of this important discussion, it will be apparent what measures are the best calculated for the Public Good, and that these will be ultimately adopted’. With the pound having depreciated significantly against gold, the authors of the 1810 report on the currency position, backed by David Ricardo, suggested that it should be brought back to its former position within two years. Sinclair and the government were opposed to this, concerned at the discomfort that drastic deflation would bring.

Rare second edition, after the first of 1833, of this analysis of the Chaco and Rio Bermejo regions of Paraguay, divided into three sections. The first covers the geography, population and natural history of the area, the second relates the conquest of Paraguay and Peru, containing extracts from various accounts of expeditions into the interior, and the third examines the Rio Bermejo (its colonization, military system, economy and so forth). The author, born in San Antonio de Arque in Río de la Plata in 1793, ‘studied engineering and joined the army at an early age to become part of the army of José de San Martín. While fighting against the royal army in Upper Peru, he found time to be elected to the congress of the province of Salta in Argentina. He … also wrote an unfinished Diccionario geográfico on Chile, Peru, and Río de la Plata. He died in 1862’ (Olson p. 30).

LORD CHANCELLOR’S LIVES FROM THE AGE OF THE FOUNDATION OF ‘POLITICAL ECONOMY’ BROUGHAM, Lord Henry.

Lives of men of letters and science who flourished in the time of George III … with portraits, engraved on steel.

First edition of the first volume (1845), later edition of the second volume (dated 1847, first published 1846) of Brougham’s lives which includes Voltaire, Hume, Davy, Johnson, and Adam Smith to name a few stars in the firmament of the reign of George III, or, in Brougham’s terms, the ‘Augustan age of modern history’. He entitles it thus primarily because of the development of ‘political science’ during the period: ‘it laid the foundations, and then reared the superstructure. The science of chemistry almost entirely, [and] of political economy entirely, were the growth of this remarkable era’ (I, pp. vii-viii).