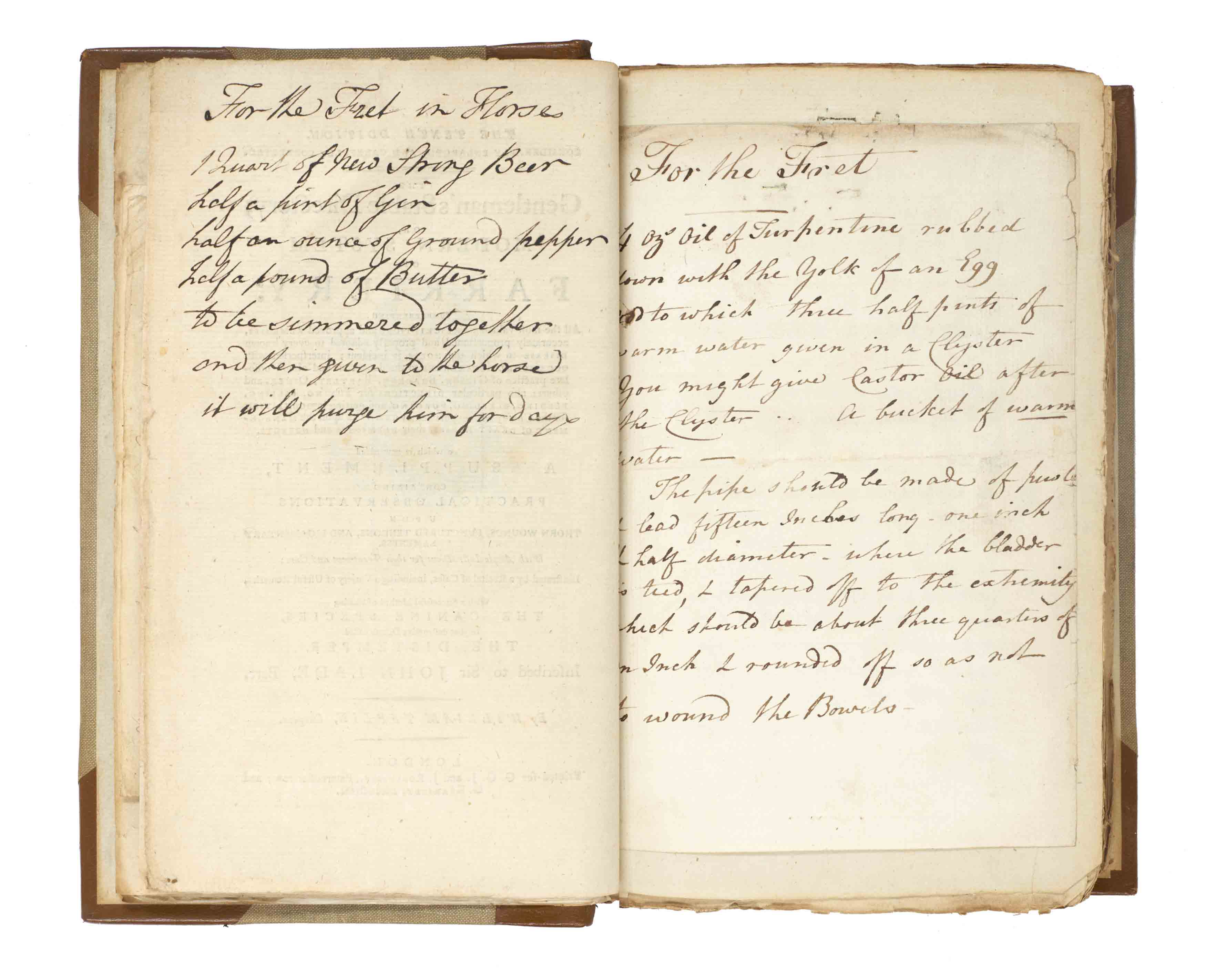 Added to your basket:
The Gentleman’s Stable Directory, or modern System of Farriery, comprehending all the most valuable Prescriptions and approved Remedies, accurately proportioned and properly adapted to every known Disease to which the Horse is incident, interspersed with occasional References to the dangerous and almost obsolete Practice of Gibson, Bracken, Bartlet, Osmer, and others, also particular Direction for Buying, Selling, Feeding, Bleeding, Purging, and Getting into Condition for the Chase, with experimental Remarks upon the Management of Draft Horses, their Blemishes and Defects, to which is now added a Supplement, containing practical Observations upon Thorn Wounds, punctured Tendons, and ligamentary Lameness, with ample Instructions for their Treatment and Cure, illustrated by a Recital of Cases, including a Variety of useful Remarks, with a successful Method of Treating the canine Species, in that destructive Disease called the Distemper.

‘Tenth edition, considerably enlarged and carefully corrected’, an annotated copy of one of the best known works on farriery. Though published only two years previously, the Gentleman’s Stable Directory had reached its tenth edition by 1790 and continued to be printed in extraordinary numbers until the end of the century. Despite this success, Pugh describes Taplin as ‘a very mediocre practitioner and writer’ (‘although better than a quack’). Nonetheless, he was a keen supporter of the professionalisation and scientific development of farriery, identifying in this work the errors of earlier authors, and ‘as far as one can tell, he was the only member of the old generation of farriers to attempt to associate himself with the new venture [the future Royal Veterinary College] in veterinary science’ (Pugh).

The present copy contains extensive contemporary manuscript notes detailing recipes relating to veterinary medicine as well as methods ‘to make Bats forsake the place’ and ‘to draw rats or mice into a Cage’.

A handsome early Lyons edition of Martial’s epigrams, with the commentaries of Calderino, Merula, and Poliziano, and illustrated with sixteen attractive woodcuts by Guillaume le Roy. Le Roy’s blocks, previously used to illustrated a 1510 Lyons Ovid, are copied from the unattributed woodcuts used to illustrate the 1497 Giunta Metamophoses, ‘the style [of which] suggests that of the famous Aldine Hypnerotomachia Poliphili which was to follow two years later’ (Mortimer). Even in this new context in the only Morin edition of Martial’s epigrams, the woodcuts lose none of their charm and vivacity.