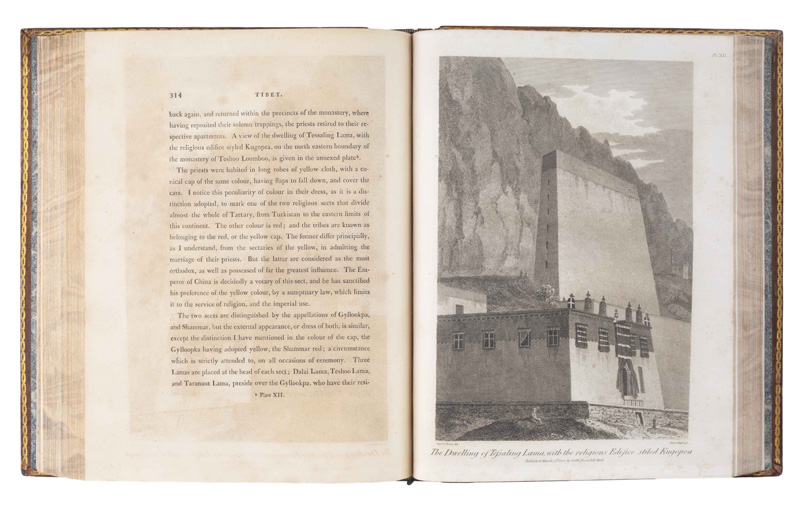 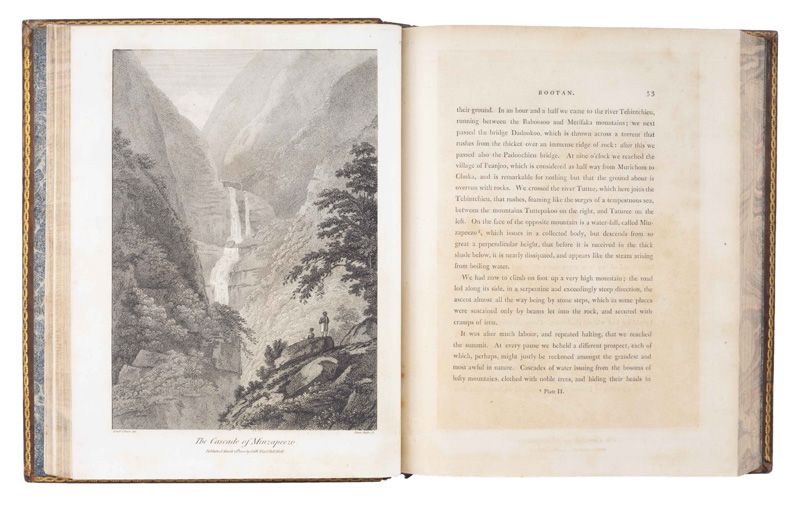 Large 4to, pp. xxviii, 473, [1 (blank)]; with 1 folding map and 13 engraved plates; light foxing to plates, some offsetting from plates; overall very good in contemporary calf, gilt fillet border to covers, spine gilt in compartments with red morocco lettering-piece, marbled edges and endpapers; upper board detached, some wear to corners and rubbing to covers.

Added to your basket:
An account of an embassy to the court of the Teshoo Lama, in Tibet; containing a narrative of a journey through Bootan, and part of Tibet ... To which are added, views taken on the spot, by Lieutenant Samuel Davis; and observations botanical, mineralogical, and medical, by Mr Robert Saunders.

‘Captain Turner’s journey to Tibet in 1783 was a follow-up to that of George Bogle’s mission of 1774 ...  The object of Turner’s passage through Bhutan and his visit to the Tibetan Court was to ascertain the nature of the relationships of Bhutan with Tibet, and of the latter with China.  The subsequent narrative is a leisurely paced and highly detailed portrayal of the area’s natural history, observations on social and cultural characteristics, and glimpses of beautiful mountain scenery.  For example, Turner’s prose records his delight at the discovery of a strawberry patch, his wonderment over the antics of a group of monkeys, and his respect for the Tibetan Regent.  Although the political consequences of the trip proved negligible, the descriptions of Bhutan and Tibet continue to retain an interest as do Turner’s remarkable full page illustrations’ (Riddick).