4to., pp. [70], wanting the initial blank (A1); outer woodcut border of title-page cropped (even though it is folded over at lower and outer edges), a few small marginal repairs, but a good copy in modern half calf.

Added to your basket:
The Sophister. A Comedy …

First edition, attributed to Richard Zouche, Regius professor of civil law at Oxford from 1620 until his death. Only two literary works are credited to Zouche (1590-1651), a poem The Dove: or Passages of Cosmography (1613), and the present play, with its resoundingly legal vocabulary.

Our Civill Law doth seeme a royall thing,
It hath more Titles than the Spanish King:
But yet the Common Law quite puts it downe.
In getting, like the Pope, so many a Crowne.

The Prologue, ‘spoken by Mercury to the Academicall Auditors’, suggests a university or inns of court audience, and it is likely it was first performed c.1614-1620. The play itself has a distinctly academic bent – the plot centring on the sophister Fallacy, his father Discourse, and a sequence of rhetorical and philosophical figures: Proposition, Description, Invention, Division, Ambiguity.

A manuscript version under the title ‘Fallacy, or the Troubles of Great Hermenia’ (MS Harleian 6869.2) probably represents a stage of the play before censorship, and names the author as ‘R. Z.’

Poems with the Muses Looking-Glasse: and Amyntas …

Leaving Cambridge for London in 1632, he engaged with too much enthusiasm in the dissipations of metropolitan literary life, and his ‘immoderate way of living in all probablility shortened his days (Phillips, Theatrum Poetarum, 1675). Commendatory verses here come from other ‘sons’ including Owen Feltham, and there are several poems addressed to Jonson himself, and ‘A Parley with his empty Purse’: 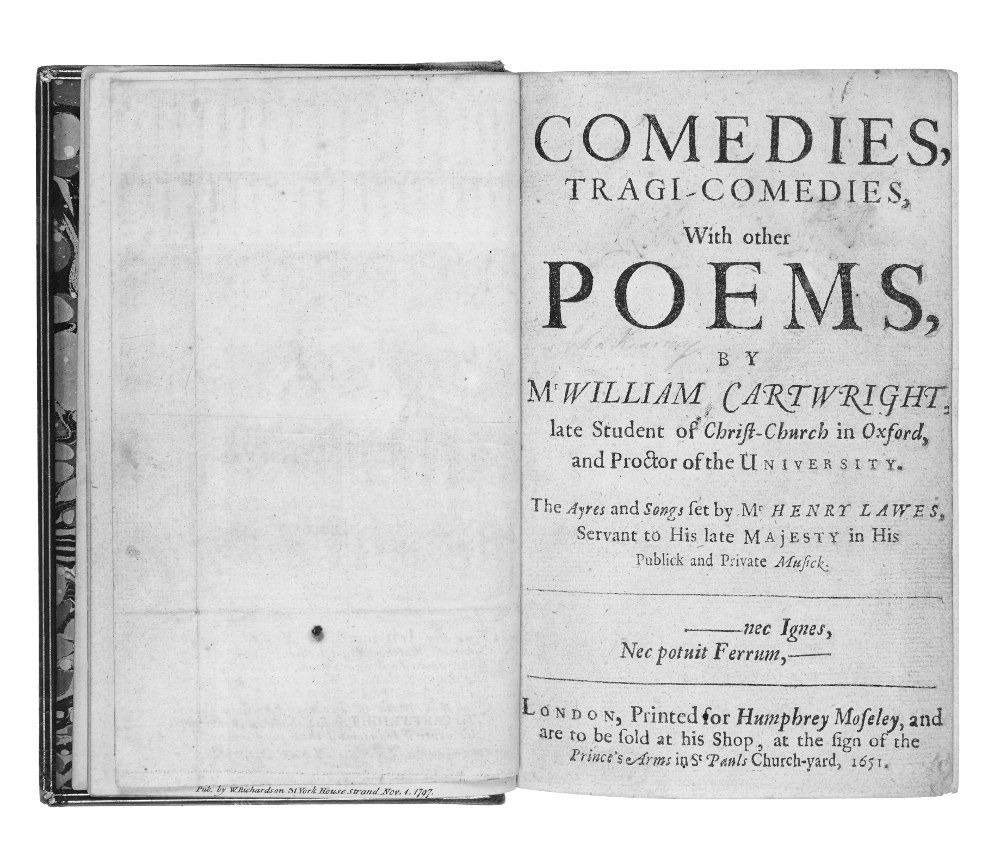 A FAVOURITE OF CHARLES I CARTWRIGHT, William.

Comedies, Tragi-comedies, with other Poems … the Ayres and Songs set by Mr Henry Lawes, Servant to his late Majesty in His public and private Musick …

First edition of the witty and elegant drama and verse of a celebrated ‘son of Ben’, who said ‘My son Cartwright writes like a man’. According to Evelyn, Charles I reckoned The Royall Slave ‘the best that was ever acted’ after he saw it as the main entertainment on the royal progress to Oxford in 1636. When Cartwright died young of camp fever at Oxford in 1643, he was mourned personally by Charles, who wore black on the day of his funeral. No fewer than fifty-six commendatory poems by Katherine Philips, Henry, Thomas and Francis Vaughan, Izaak Walton, John Fell, James Howell et al. preface the work.