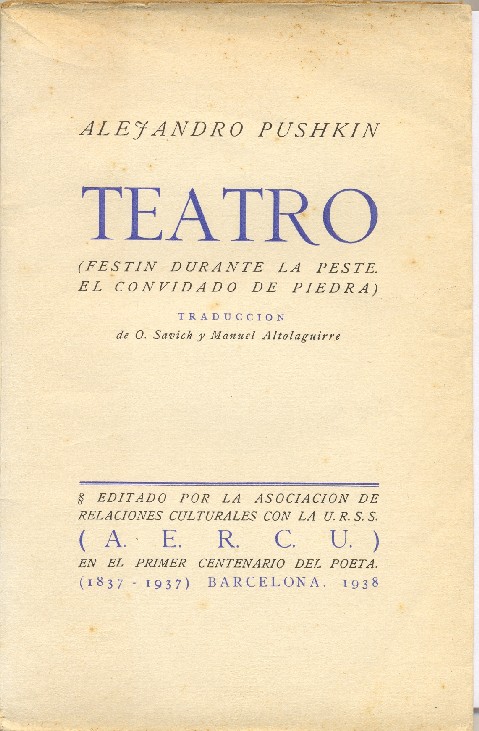 First edition: Altolaguirre’s translation of two of Pushkin’s Little Tragedies, ‘The Stone Guest’ and ‘A Feast During the Plague’ produced for the Russian poet’s centenary; apparently printed on Altolaguirre’s own press.

Krai ottsov [Land of the fathers].

First edition: a collection of poems.

Almeida was one of the most important figures of the iluminismo in Portugal and spent time in exile in France following the persecution of his congregation by the Marquis of Pombal. He wrote Lisboa destruida soon after the earthquake but it remained in manuscript until 1803, its publication perhaps motivated by the outbreak of the Napoleonic Wars, which threatened to bring fresh disaster to his country. In his prologue, Almeida refers to Voltaire’s Poème sur le désastre de Lisbonne as ‘obra dictada, naõ pelas Musas Christãs, mas certamente pelas Furias infernaes’. Almeida’s poem has been praised by the bibliographer Inocênio for its historical value and is illustrated with beautiful vignettes alluding to the earthquake.

Provenance: this copy belonged to one Captain Saunders of the 14th Light Dragoons who no doubt acquired it on service with the 14th during the Peninsula War between 1808 and 1814.

Only one copy on Library Hub, at the British Library.