Added to your basket:
The Gentleman’s compleat Jockey, with the perfect Horse-Man and experienc’d Farrier, containing: I. the Nature of Horses, their Breeding, Feeding, and Management in all Paces, to fit them for War, Racing, Travel, Hunting, or other Recreations and Advantages; II. the true Method, with proper Rules and Directions, to order, diet, and physic the Running-Horse, to bring him to any Match, or Race, with Success; III. the Methods to buy Horses, and prevent being cheated, noting the particular Marks of the good and bad Horses, in all their Circumstances; IV. how to make Blazes, Stars, and Snips, to fatten a Horse with little Charge, and to make him lively and lovely; V. the whole Art of a Farrier, in Curing all Diseases, Griefs, and Sorrances incident to Horses, with their Symptoms and Causes; VI. the Methods of Shooing, Blooding, Rowling, Purging, and Prevention of Diseases, and many other Things from long Experience and approved Practice; by A.S., Gent.

Fifth edition, very scarce, of an anonymous early farriery manual. Among the first popular guides to farriery, a form which would be much copied throughout the eighteenth and nineteenth centuries, the Gentleman’s compleat Jockey (formerly attributed to Adolphus Speed) was first published in 1696 and soon underwent several editions, each of which survives in limited numbers only. Of this edition OCLC records three copies worldwide (Keeneland, Texas, Berlin).

A Treatise on the Prevention of Diseases incidental to Horses, from bad Management in Regard to Stables, Food, Water, Air, and Exercise, to which are subjoined Observations on some of the surgical and medical Branches of Farriery … second Edition, corrected and enlarged. 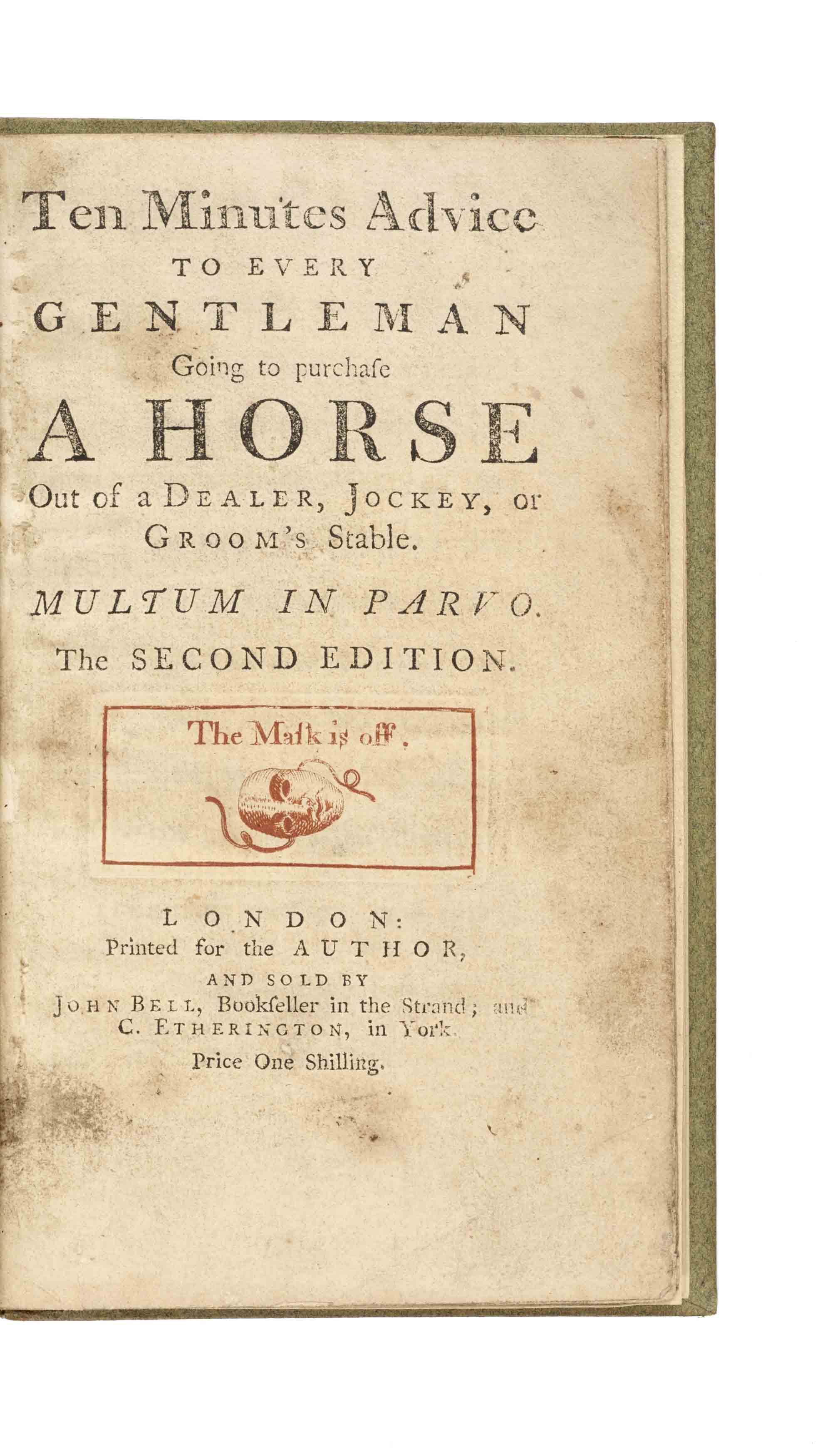 Ten Minutes Advice to every Gentleman going to purchase a Horse out of a Dealer, Jockey, or Groom’s Stable.

Very rare second edition of advice on the purchase of horses, with the tricks used by dealers to deceive buyers. Though the text is commonly attributed to Bracken, he is unlikely to have published anything a decade after his death; the author’s preface, signed ‘S.’, may offer a more productive lead. A concise work, the author notes: ‘This Treatise might have been swelled to a much greater size, but the Author thought it would prove too tedious; he hopes the shortness of it will not be deemed a fault, but rather a recommendation’ (p. 22); evidently not deemed a recommendation, the work was much expanded for future editions.