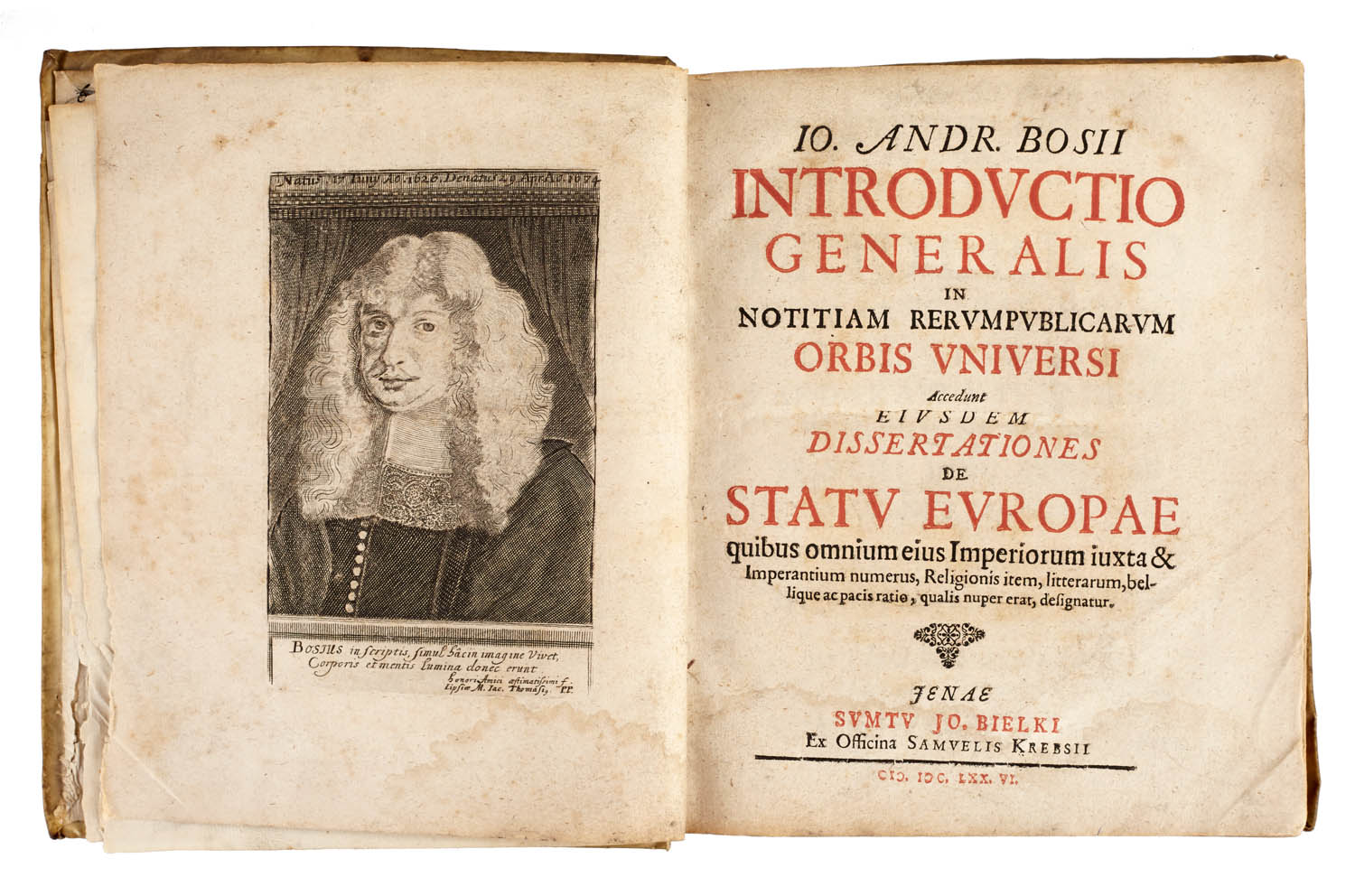 4to, pp. [xvi], 370, [22]; with including an engraved portrait of the author; some browning due to paper stock, a few light water stains, but a very good copy in contemporary vellum.

First edition of a pioneering work of statistics and rare Americanum, by the philosopher and historian Johann Andreas Bose (1624–1674). Bose’s crucial intuition as a student of human societies lies in his advocacy of interdisciplinary investigations. His work ‘on all the states in the world’ marshals data and outlooks ranging from geography to economics and trade, politics, history, sciences, religion, and includes several remarks about the age of discoveries, particularly noting the impact of the Europeans’ encounter with America.

The book is of considerable theoretical importance, as it sets out a specific status for the discipline of statistics within the realm of the human sciences. Bose ‘analyzes the differences between the universality of politics (constitutional doctrine) and the singularities of history. Statistics, Bose reasons, is therefore not part of political philosophy, since it does not manifest itself in the discussion of constitutional law as applied to a given state. Nor can statistics be classed as a genus of history writing, which “represents individual state actions with the details of time, space, social condition, character and other circumstances” […] Instead, statistics bestows a “more general treatment” […] on the details of history. [It] represents the concerns of individual states “principally from a universal point of view and not tied to this or that point in time or these or those specific persons”. In accordance with the famous formula from Aristotle’s Poetics, which claims that poetry, in the medium of probability, brings the singularities of history closer to the universality of philosophy, statistics is poetical. Statistics is the poetry of the state’ (R. Campe, The Game of probability: Literature and calculation from Pascal to Kleist, Stanford University Press, 2013, p. 244).

Not all of Bose’s works passed muster with censorship. Yet his career at Jena was a success: after holding of the chair of history for seven years, counting Leibniz and Pufendorf among his most illustrious pupils, he became rector in the same University.

First edition of Sacchi’s first work: a theoretical study of music and acoustic from a mathematical and physical perspective built upon the most innovative eighteenth-century physics. Galilei, Kapler, Newton, Mersenne, and contemporary works on the nature of air form the basis of Sacchi’s study of strings and their number, ratio, length and correspondence, as the basis for the solution of the problem of temperament. Sacchi’s innovation takes the cue from Newton’s parallel treatment of optics and acoustics and his matching of the seven musical tones with seven light bands obtained from a prism. Sacchi suggests matching the seven colours with eleven strings (the twelfth corresponding to the first) instead of seven, to outline a major and minor mode, and provides for each of them a fractional formula.