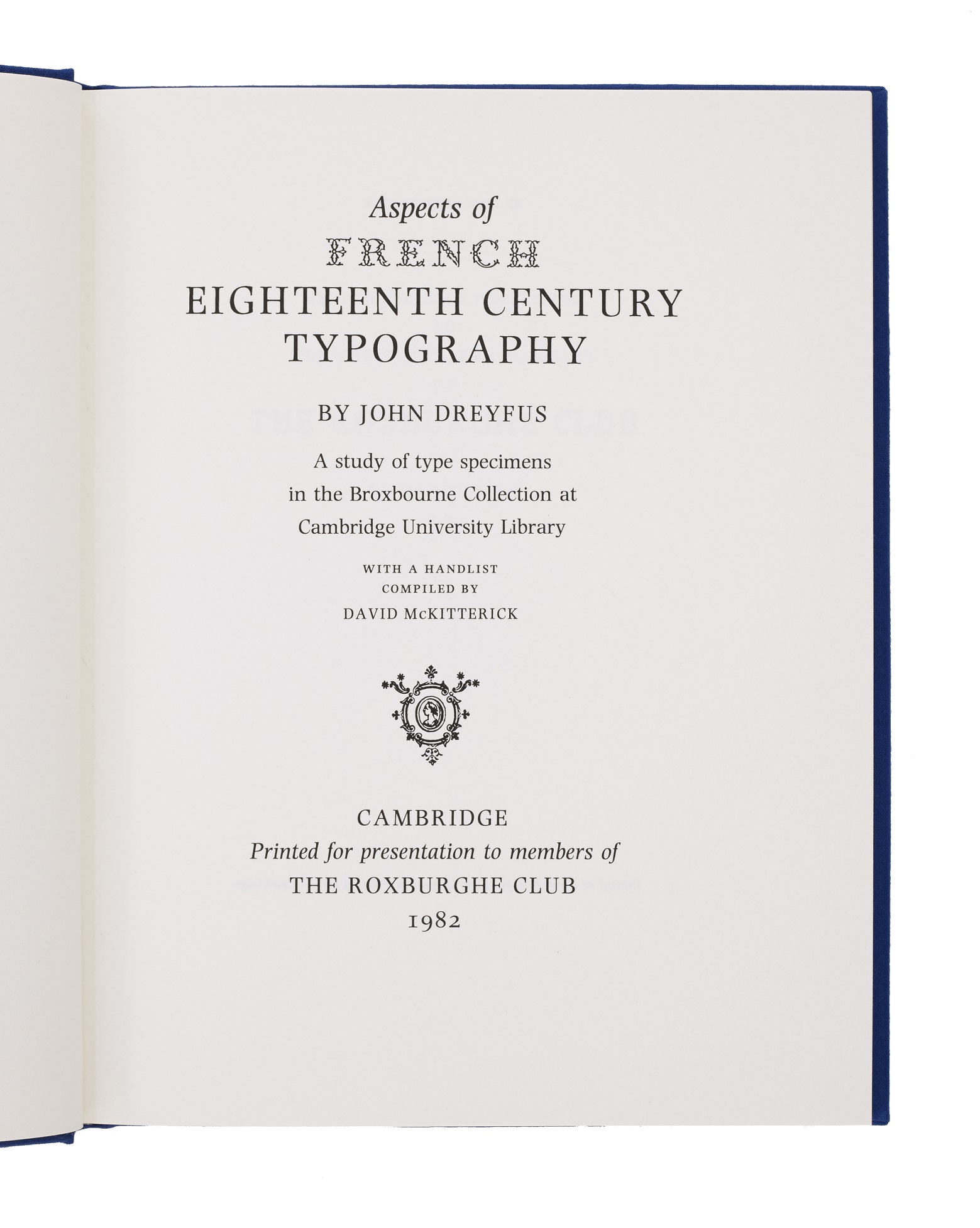 Added to your basket:
Aspects of French Eighteenth Century Typography. A study of type specimens in the Broxbourne Collection at Cambridge University Library. With a handlist compiled by David McKitterick.

A history of French type design in the eighteenth century based on the author’s detailed examinations of French type ornaments and typefounding methods. The final chapter, on the uses of type specimens, is followed by a handlist of twenty type specimens in the Broxbourne Collection covering the period 1740 to 1800.

The Library of Thomas Tresham and Thomas Brudenell. With an introduction by John Martin Robinson.

Sir Thomas Tresham (1543–1605) remains best-known for his buildings, especially the market house at Rothwell, the Triangular Lodge at Rushton and Lyveden New Bield. His library, one of the largest in England of its time, has hitherto attracted comparatively little interest. Now, as a result of a careful examination of both the portion of the library which has been preserved at Deene Park in Northamptonshire by the descendants of Tresham’s son-in-law, Thomas Brudenell, and of a manuscript inventory of the original library, Nicolas Barker and David Quentin have provided a detailed picture of the library and the circumstances of its creation.  The catalogue of nearly 2,000 works shows that Tresham owned the latest works on architecture, mathematics, astronomy and science, Catholic theology and devotion, with a wide range of works on history and literature. John Martin Robinson’s introduction gives much information on Tresham’s family and his patronage of architecture.

The Wizard Earl’s Advices to his Son. A Facsimile and Transcript from the Manuscript of Henry Percy, 9th Earl of Northumberland, at Petworth House.

The ‘Wizard Earl’, Henry, Ninth Earl of Northumberland, spent much of his life under suspicion. He was, first of all, suspected of being a member of the ‘School of Night’, the butt of Shakespeare’s Love’s Labours Lost. Secondly, and more gravely, he was suspected of involvement in the Gunpowder Plot and imprisoned in the Tower for almost sixteen years. It was during his incarceration that he compiled advice to his son and heir, Algernon. This work is a full facsimile, with a diplomatic transcript, of the ‘Advices to his Son’. The texts are prefaced with an extended introduction by Professor G. R. Batho and Dr Stephen Clucas, who together provide a full and up-to-date account of the Earl’s life, the writing of the ‘Advices’, and his intellectual tastes and development.