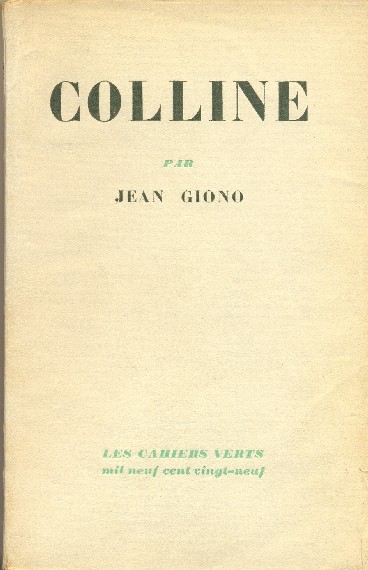 8vo, pp. 201, one of 170 numbered copies on vélin pur fil; a very good copy, uncut in the original printed wrappers.

Added to your basket:
Colline.

First edition of Giono’s first book; it forms the first part of his successful ‘Pan trilogy’ with Un de Baumugnes (1929) and Regain (1930).

‘With his Trilogie de Pan... Giono had an immediate impact on a reading public that shared his aversion for a civilization it believed responsible for the disaster of World War I. Conditioned by a youth spent reading the Bible and Homer, and listening to Provençal tales told at the fireside, he transposed into the novel the form and style of the oral tale, transforming his native Provence into a semilegendary realm peopled with beings halfway between peasantry and poetry; against a background of the recreation of the world, Giono set down words and actions in which simple, solid values resumed their place in contrast to the morals of a humanity he saw as decadent. This beginning-of-the-world universe, its joys and its labors, also its sorrows – love, death – belonged to the old utopian tradition calling for a return to primordial nature where mankind can once again find happiness’ (Germaine Brée, Twentieth Century French Literature).

IN MOURNING FOR THE FRENCH ROYAL FAMILY DELILLE, Jacques.