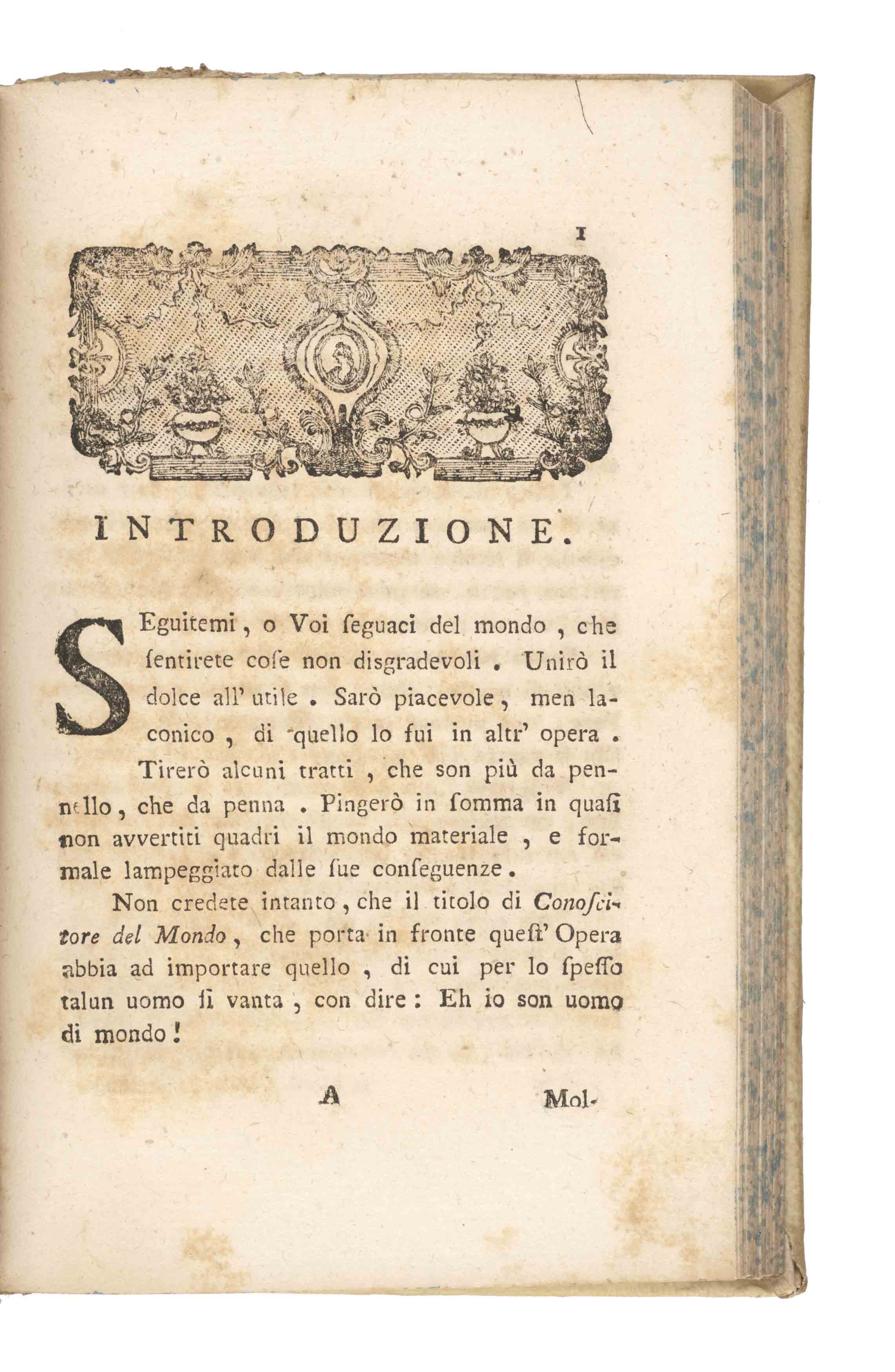 Two works in one volume, 8vo, pp. x, 80; iii-xvi, 160; second work wanting initial blank (as with Google Books copy); both works with woodcut headpieces and printers’ devices; some foxing and dustsoiling throughout, especially to second work; in contemporary vellum, title in gilt on spine; slight chip at head of spine, but otherwise good.

The first, which had appeared in a first edition the previous year, offers a series of reflections on the qualities required of a judge, inspired by the recently imposed Codice leuciano of 1789, which established a legal code for the workers’ village established around the new silk factory at San Leucio in Caserta. Giordano divides his work into sections on self-knowledge, knowledge of God, and the knowledge of individuals, and then the judge’s duties to these three, and how these duties should be acted upon. After each section, Giordano offers a short ‘flight of fantasy’ to illustrate his arguments.

In the second work, here in first edition, Giordano expands on the themes of the first in more general terms, reflecting on the nature of political progress, the role of monarchy and government, theories of education, and the place of education, religion, and philosophy in a properly functioning society and state. Both works are dedicated to Francesco Pignatelli, prince of Strongoli.

OCLC records only the first edition of the first work (at the Library of Congress) and one copy of the second, at the Biblioteca nazionale centrale di Roma.

Guevara’s Relox de principes (1529) first appeared in French in 1540 (his earlier Libro aureo de Marco Aurelio, which the Relox incorporated, had appeared in French in 1531). Guevara’s writings were popular in France, especially among the essayistes - Montaigne, of course, but also others, such as Pierre Bouaystuau (see G. L. Michaud, ‘The Spanish sources of certain sixteenth-century French writers’, Modern Language Notes, 43, 1928, pp. 157-63).

The Life of Thomas Paine, written purposely to bind with his writings.

First edition, written by Carlile (1790-1843) during his incarceration in Dorchester prison. ‘His greatest contribution to the radical cause, and the most momentous, was his republishing of the writings of Tom Paine, which he did serially in the Weekly, individually as cheap pamphlets, and also as bound volumes. Carlile rapidly became the most successful popularizer of Paine since the 1790s, and followed this later with a biography, The Life of Thomas Paine (1820)’ (ODNB).