8vo., pp. xii, 347, [1], complete with half-title (bound here after the title) and four folding engraved plates of tables and music, some musical notation in the text; old ownership inscription at head of title scratched away (a small hole resulting), slightly toned throughout, withal a good copy in nineteenth-century calf, rubbed, rebacked preserving most of the old spine; armorial bookplate of Joseph Gwilt.

Added to your basket:
A Musical Dictionary; being a Collection of Terms and Characters, as well ancient as modern; including the historical, theoretical, and practical Parts of Music: as also, an Explanation of some Parts of the Doctrine of the Antients; interspersed with Remarks on their Method and Practice, and curious Observations on the Phœnomena of Sound mathematically considered, as it’s [sic] Relations and Proportions constitute Intervals, and those again Concords and Discords. The whole carefully abstracted from the best Authors in the Greek, Latin, Italian, French, and English Languages

First edition, based largely on the Dictionnaire de Musique of Sébastien de Brossard and the musical articles in Chambers’s Cyclopaedia, with some original material. One of two variant issues, this has ‘A’ on the title-page above the ‘i’ in ‘Dictionary’.

Grassineau’s Dictionary ‘contains much of interest and ranks as the first work of its kind in English’ (Grove). It is particularly informative on the subject of ‘ancient music’. Grassineau probably had some assistance from the composer J. C. Pepusch, at whose instigation the project was apparently undertaken. Pepusch, who employed Grassineau as secretary and amanuensis, provides an admiring testimonial on the verso of the half-title (‘worthy the perusal of all Lovers of Musick’), a testimonial subscribed also by Maurice Greene (then Master of the King’s Music) and Johann Ernst Galliard; all three were founding members of the Academy of Ancient Music.

Sylva sylvarum: or a naturall historie.  In ten centuries …  Published after the authors death by William Rawley Doctor of Divinity, late His Lordships chaplaine.  The second edition.

Second edition; first published in 1626 shortly after Bacon’s death.  ‘During his last years Bacon composed his utopia, the New Atlantis, and a natural historical work entitled Sylva sylvarum, meaning a collection of collections, a miscellany of subjects.  It is a vast compilation of one thousand paragraphs consisting of extracts from many books and Bacon’s own experiments and observations.  The New Atlantis is a description of an island society and its scientific community: Salomon’s House.  In it Bacon developed ideas which he had outlined thirty years earlier in the early 1590s.  The aim of the Salomon’s House was nothing less than “the knowledge of Causes, and secret motions of things; and the enlarging of the bounds of Human Empire, to the effecting of all things possible” (Works, 3.156).  The actual description of the scientific community’s work owes something to two contemporary scientists and craftsmen, the Dutchman Cornelis Drebbel, and the Frenchman Salomon de Caus, who both spent time in Jacobean England.  The Sylva sylvarum and the New Atlantis were posthumously published in the same volume in 1626’ (ODNB). 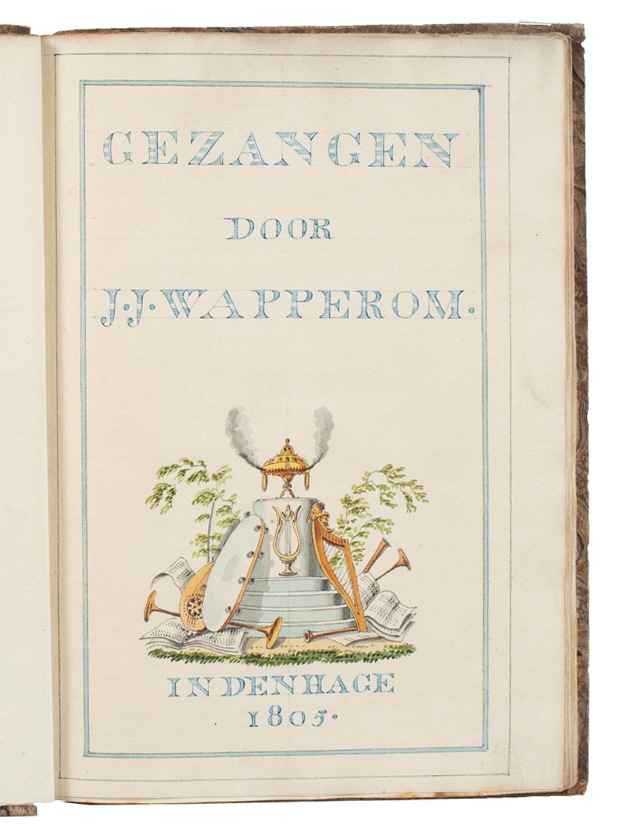 Very rare collection of songs by the Dutch notary and poet Wapperom (1763–1822), one of only a small number of copies produced, decorated by the author himself and distributed among his friends and family.