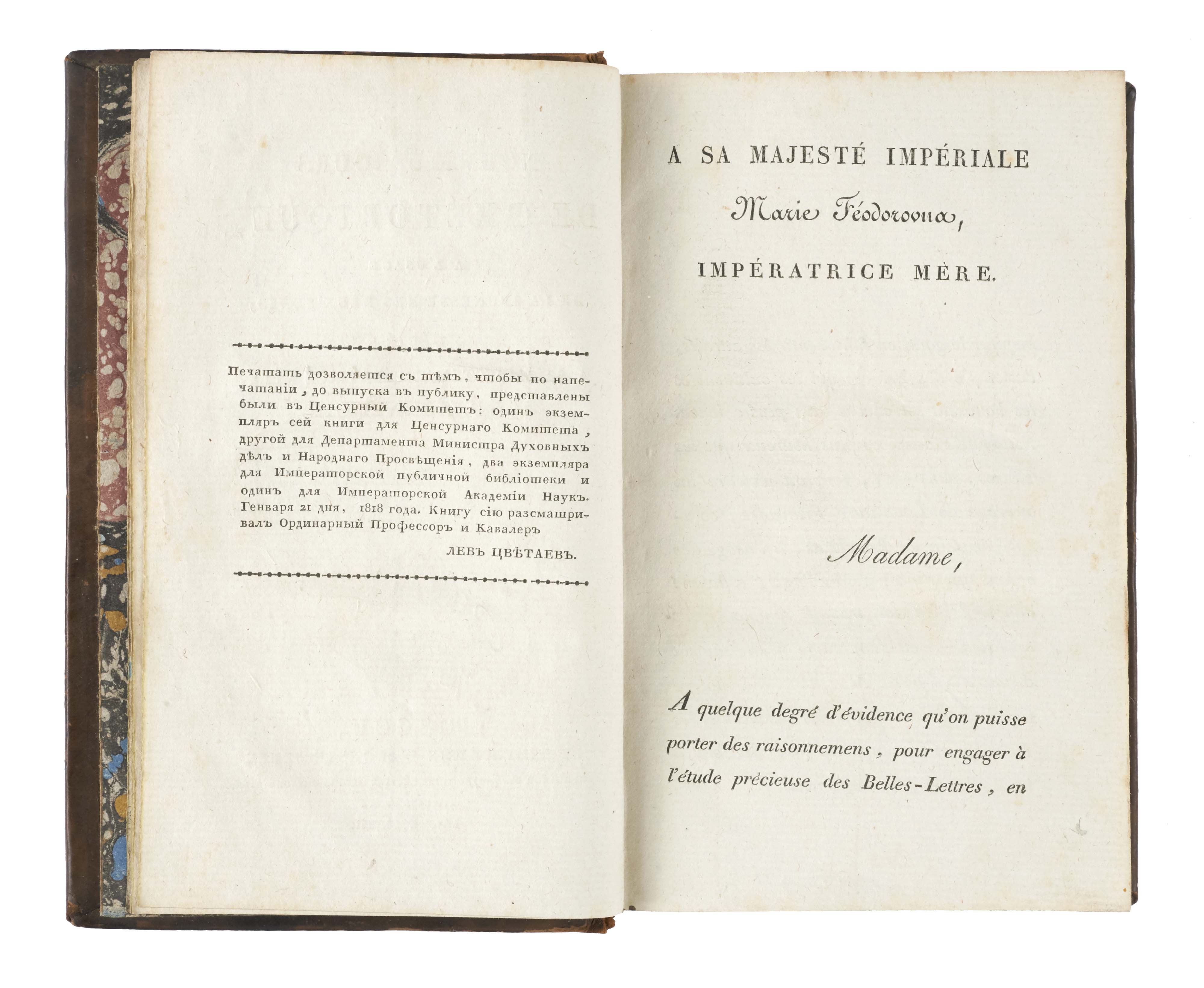 Only edition, very uncommon, of this guide to rhetoric by the Moscow-based French grammarian Pierre Hennequin (1772–1849), explicitly designed for both sexes and dedicated to the Dowager Empress Maria Feodorovna (1759–1828).

Hennequin is very explicit that his guide is written for both sexes: ‘Je demanderois aux hommes pourquoi ils veulent s’arroger le droit exclusive d’avoir de la raison et de la cultiver, d’avoir de l’esprit et de l’orner, d’avoir un cœur et de la former, d’aquérir des connoissances et de les communiquer’. His aim, he continues, is to fight the prejudice that has historically condemned the ‘more interesting half of human society’ to ignorance and obscurity, and to encourage women to take the place in society that their talents require. The work, then, gives advice on invention, oratorical passion, rhetorical structures and techniques, the importance of good taste and style, figures of speech and the use of flourishes including repetition and parenthesis, pronunciation, and gesture.

Hennequin worked as a French teacher in Moscow throughout the 1810s, principally to young aristocratic women, before becoming professor of French at the University of Moscow in 1827. Among his other works was a Cours de literature ancienne et modern, also published by Semen in four volumes (Moscow, 1821-2).

OCLC lists only two copies outside Europe (Library of Congress, University of Oklahoma); not in Library Hub.

Hints for Improvement in the Art of Reading ...

First edition. The future lexicographer John Walker (1732-1807) left grammar school and then absconded from an apprenticeship to join a succession of provincial theatre companies. Garrick hired him in 1754 and for the next four years he performed a number of mainly minor parts at Drury Lane. In 1758 Walker and his wife were engaged to join the new Crow Street Theatre in Dublin. After further engagements there and at Covent Garden and Bristol he quit the stage in 1768 and turned to teaching elocution, first at a school in Kensington Gravel Pits (now Notting Hill Gate), then as a tutor and peripatetic lecturer.

First and only edition, very rare, the only publication by Casotti, ‘Italian Minister, and Professor’, dedicated to Henry Petty, Baron Shelburne, (1675-1751) but printed at the author’s expense.