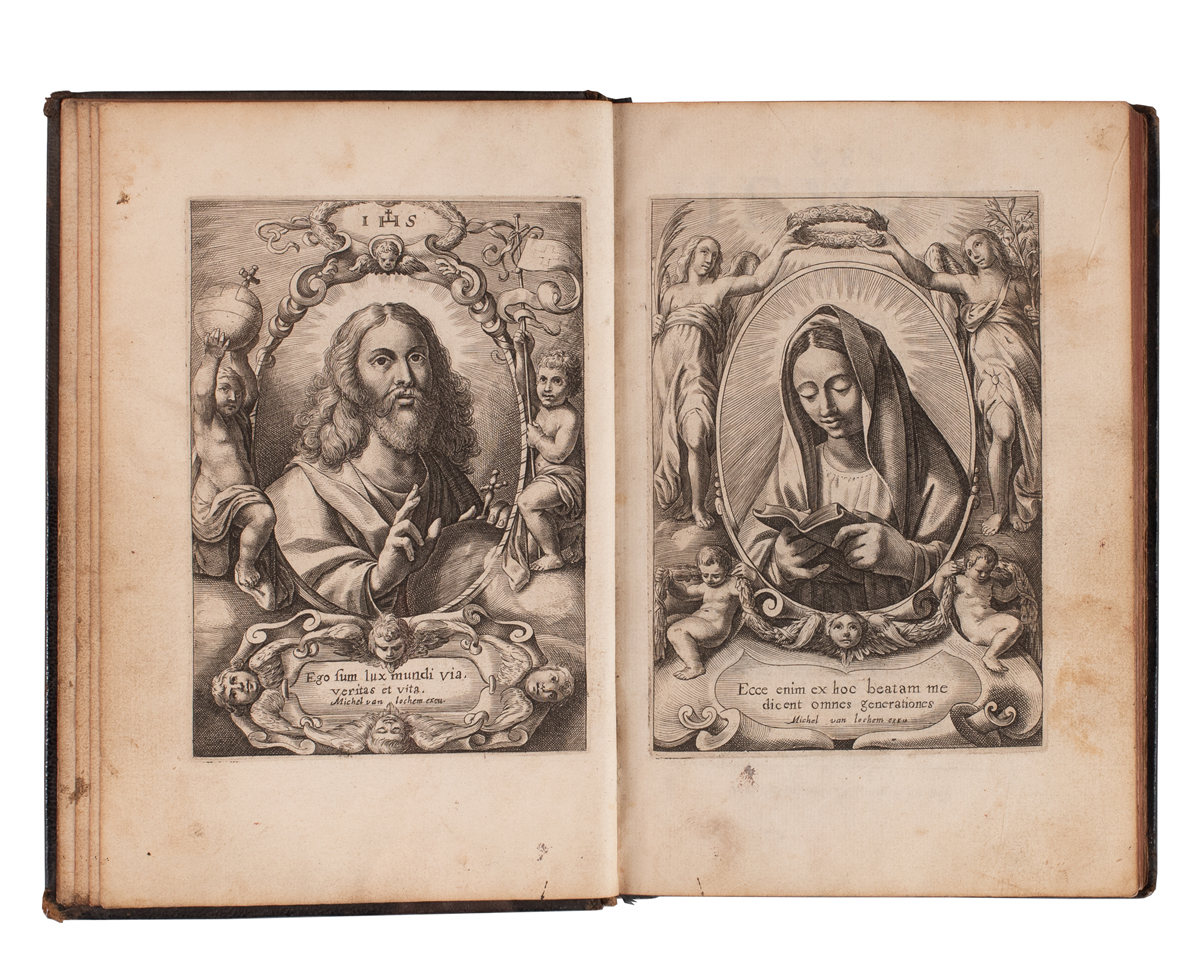 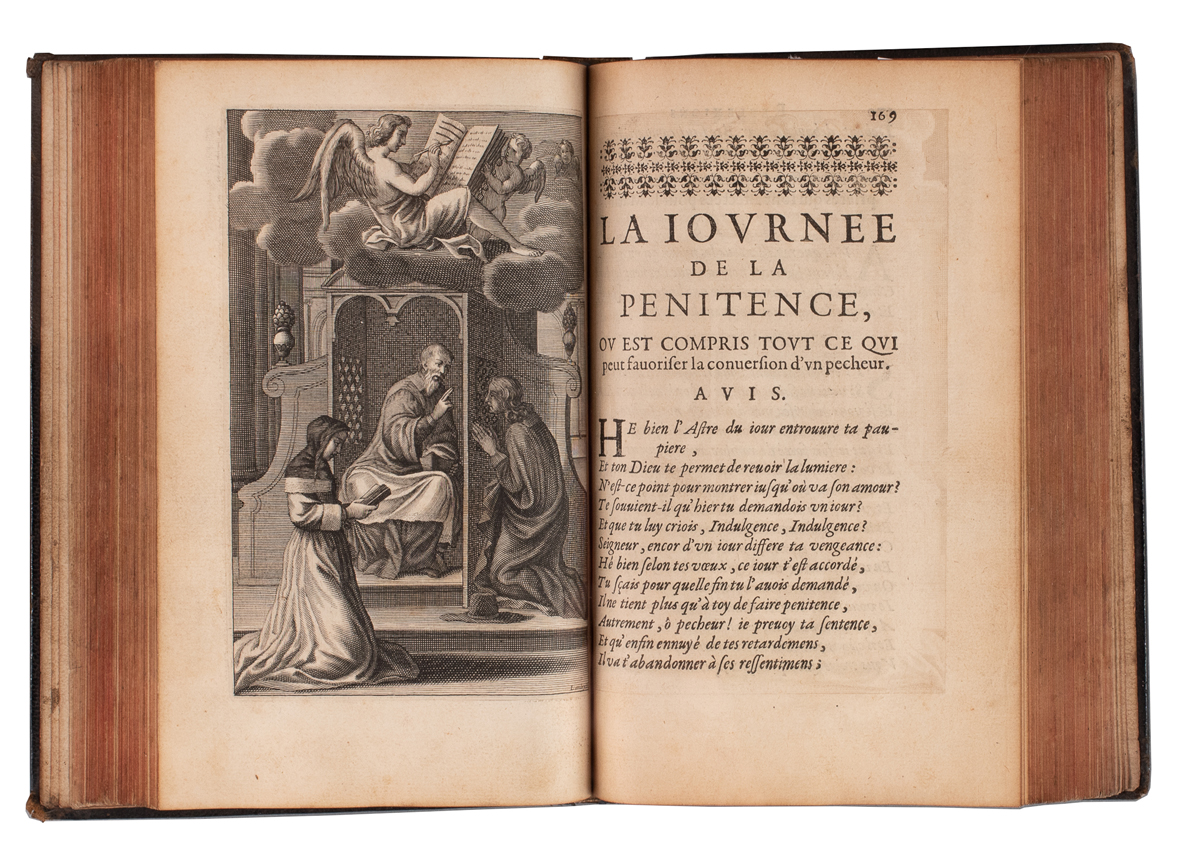 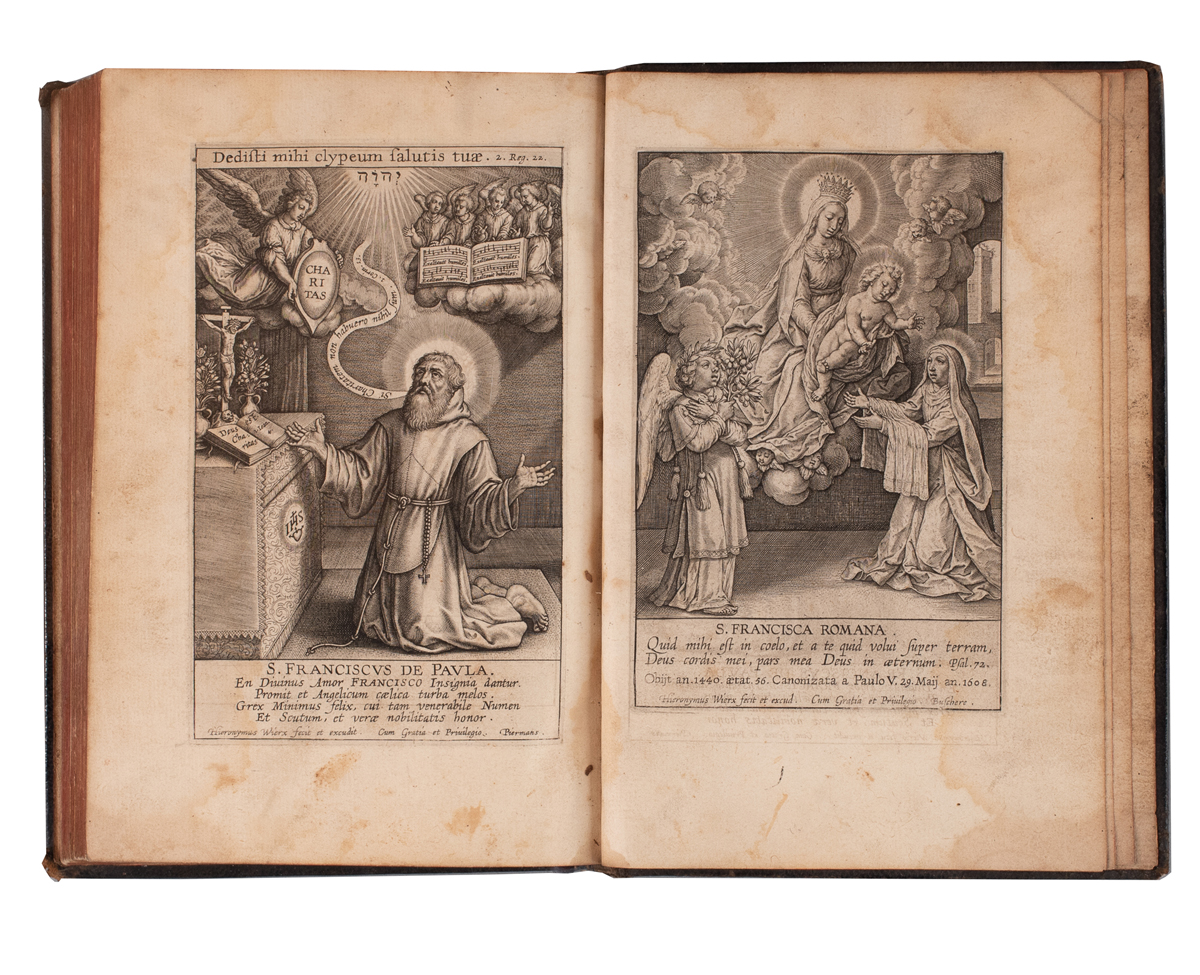 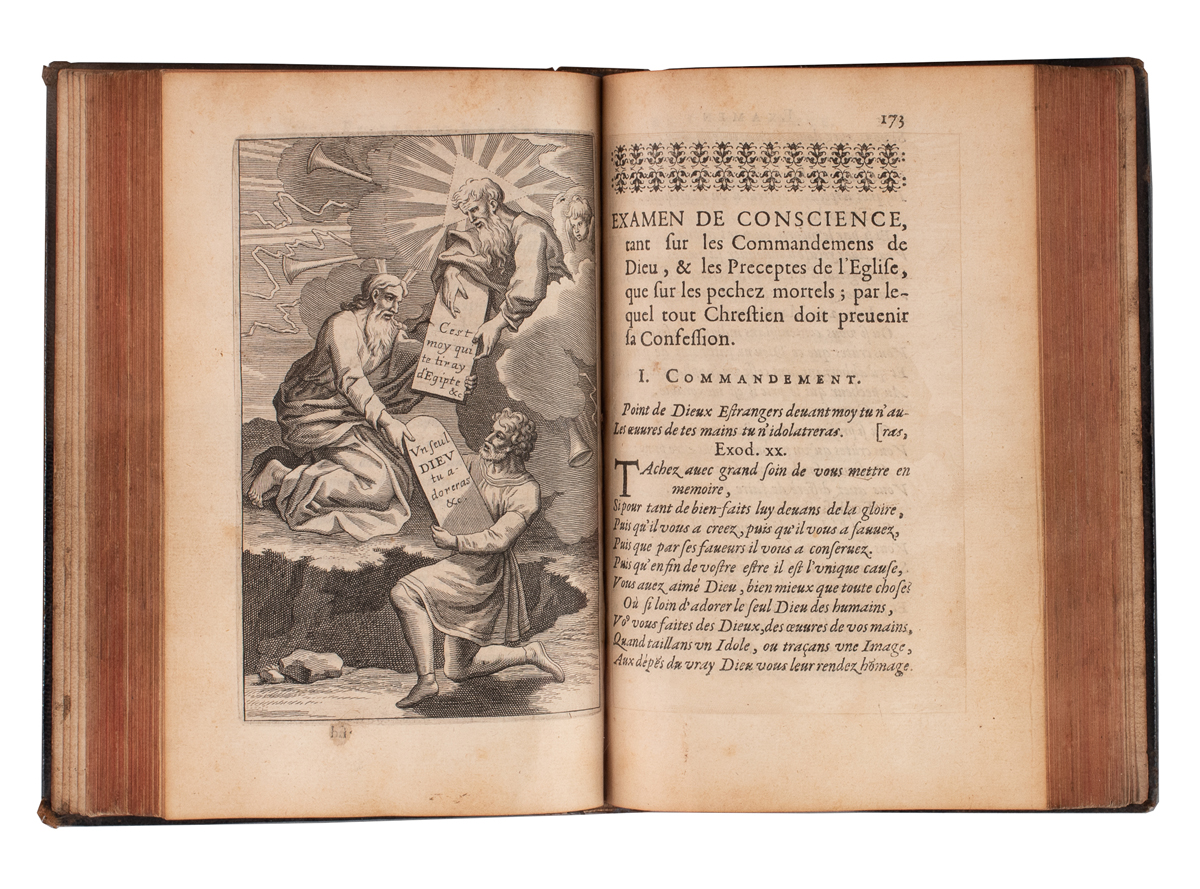 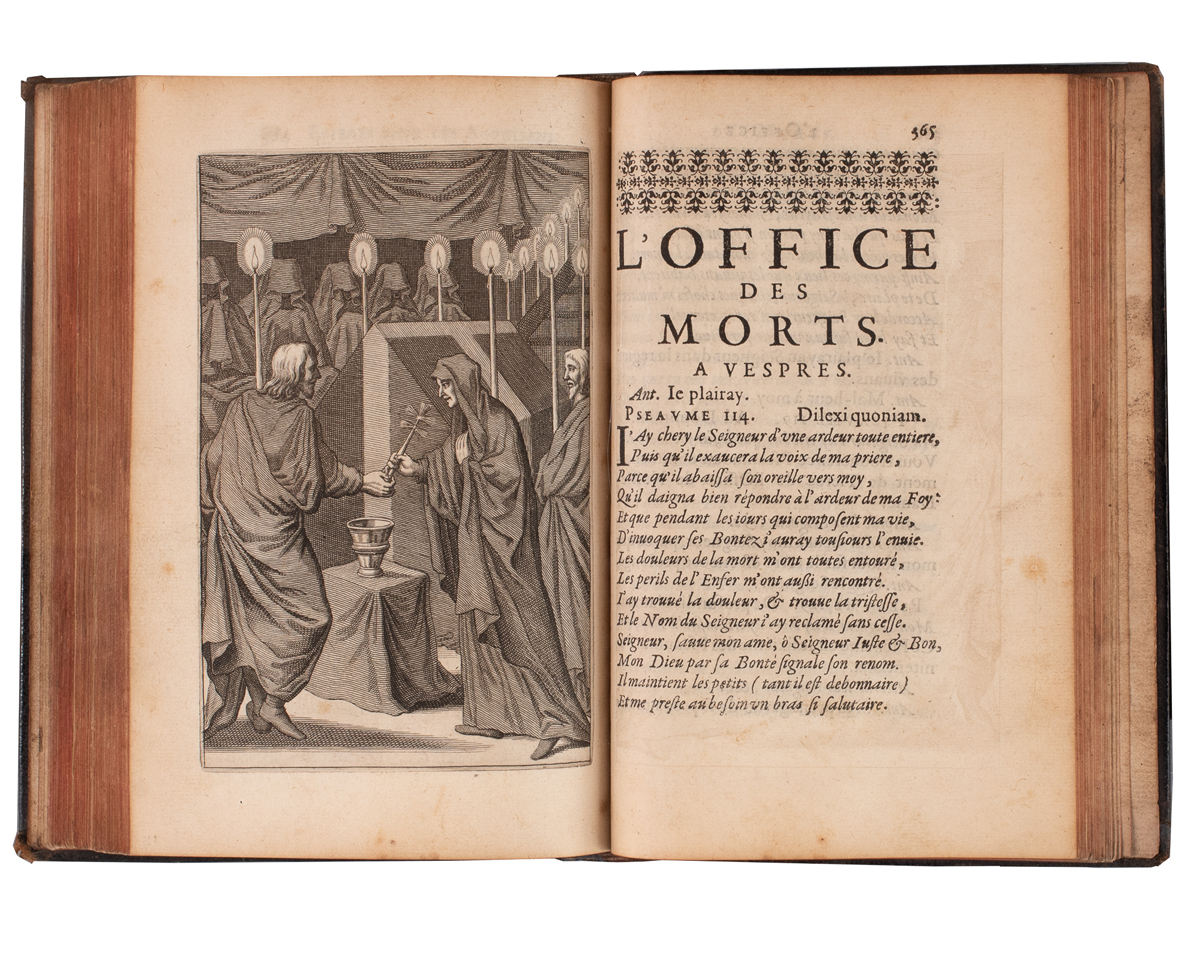 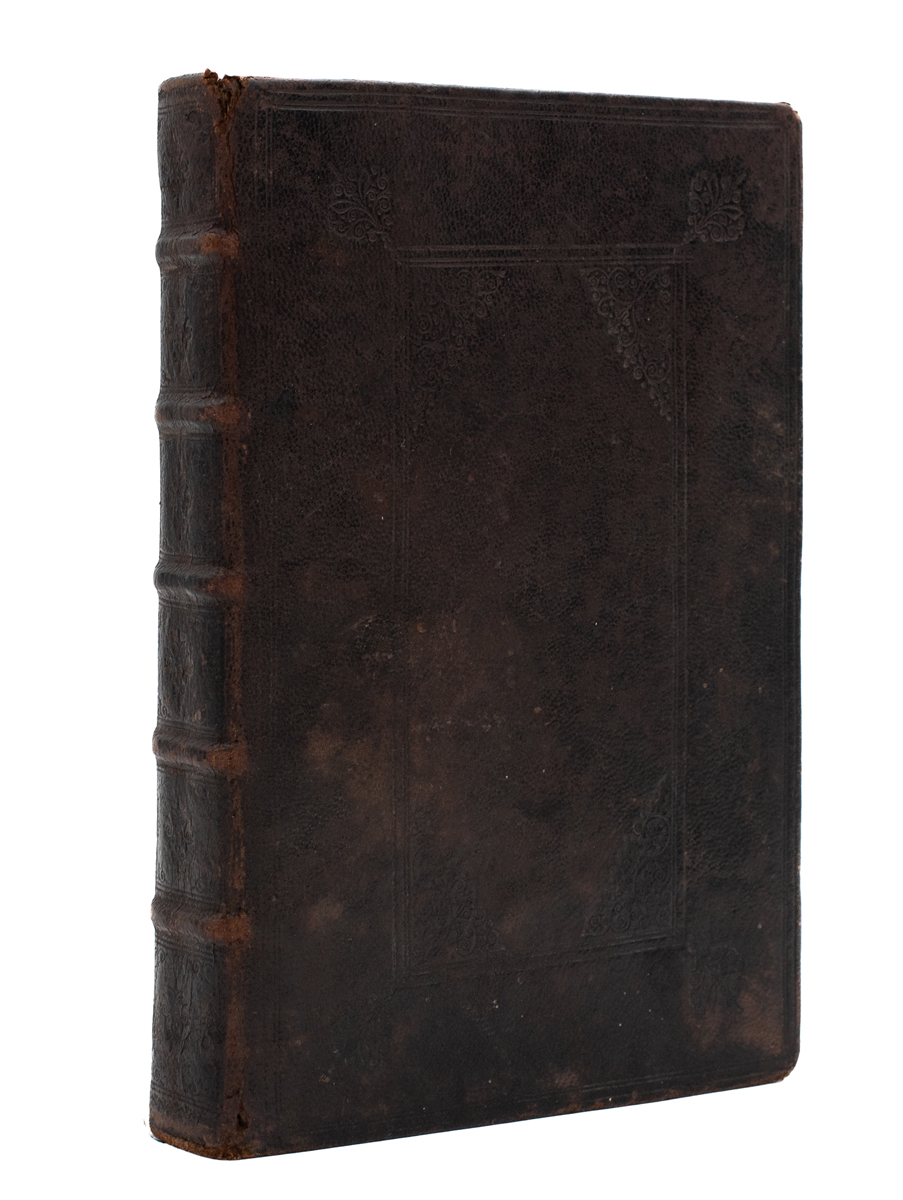 8vo, pp. [48], 430, [2]; with 16 engraved plates (one a duplicate), engraved vignette to title, woodcut initial, headpieces; occasional light marks and foxing, a little damp staining at beginning and end; very good in contemporary dark brown calf, spine and covers ruled and tooled in blind to panel design, red edges; some wear to extremities and rubbing to boards, slight worming at head of lower board; ‘Marie Pagnon’ and ‘Alfred Monin’ inscribed to front pastedown.

First edition of this handsomely illustrated collection of prayers and devotions in verse and prose by the French playwright and poet Jean Magnon (1620–1662). The number of plates in individual copies varies, this copy containing at least two more than those described on OCLC.

Following a calendar with brief saints’ lives, the text provides prayers for the morning, daytime (including meals) and evening, the Office of the Virgin, penitential meditations, prayers following Communion and for the sick and dying, and the Office of the Dead. The accompanying illustrations include busts of Christ and the Virgin Mary, both by Michel van Lochom; a couple kneeling before a crucifix, by Bartholomaus Kilian after François Chauveau; three engravings by Hieronymus Wierx depicting the Crucifixion, St Frances of Rome (repeated twice), and St Francis of Paola; and unsigned plates showing the Annunciation (with the opening of St John’s Gospel printed to the reverse), Moses and the tablets, King David and a flagellant, a confessional, Communion and funeral services, and a man on his death bed.

Best known today for his plays, Magnon served as historiographer to Louis XIV and was a great friend of Molière. He met a premature end, stabbed to death on the Pont Neuf in Paris.

Presented by the Author to a Fellow Physician MOSCATI, Pietro.

Scarce first edition of this inaugural address by the doctor and politician Pietro Moscati (1739–1824) on his assuming the chair of clinical medicine at the University of Pavia, this copy presented by the author to the distinguished French physiologist Pierre-Jean-Georges Cabanis.