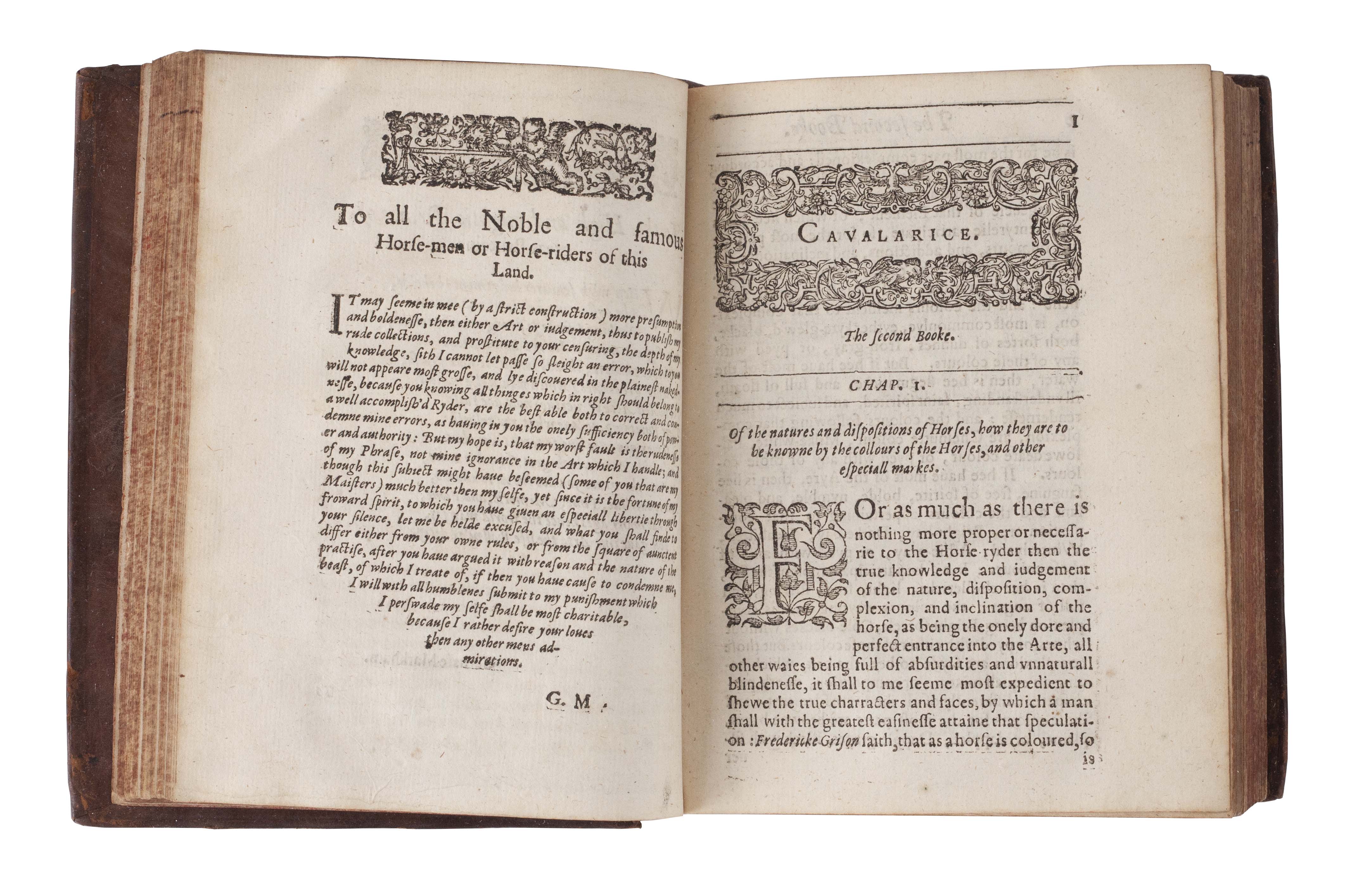 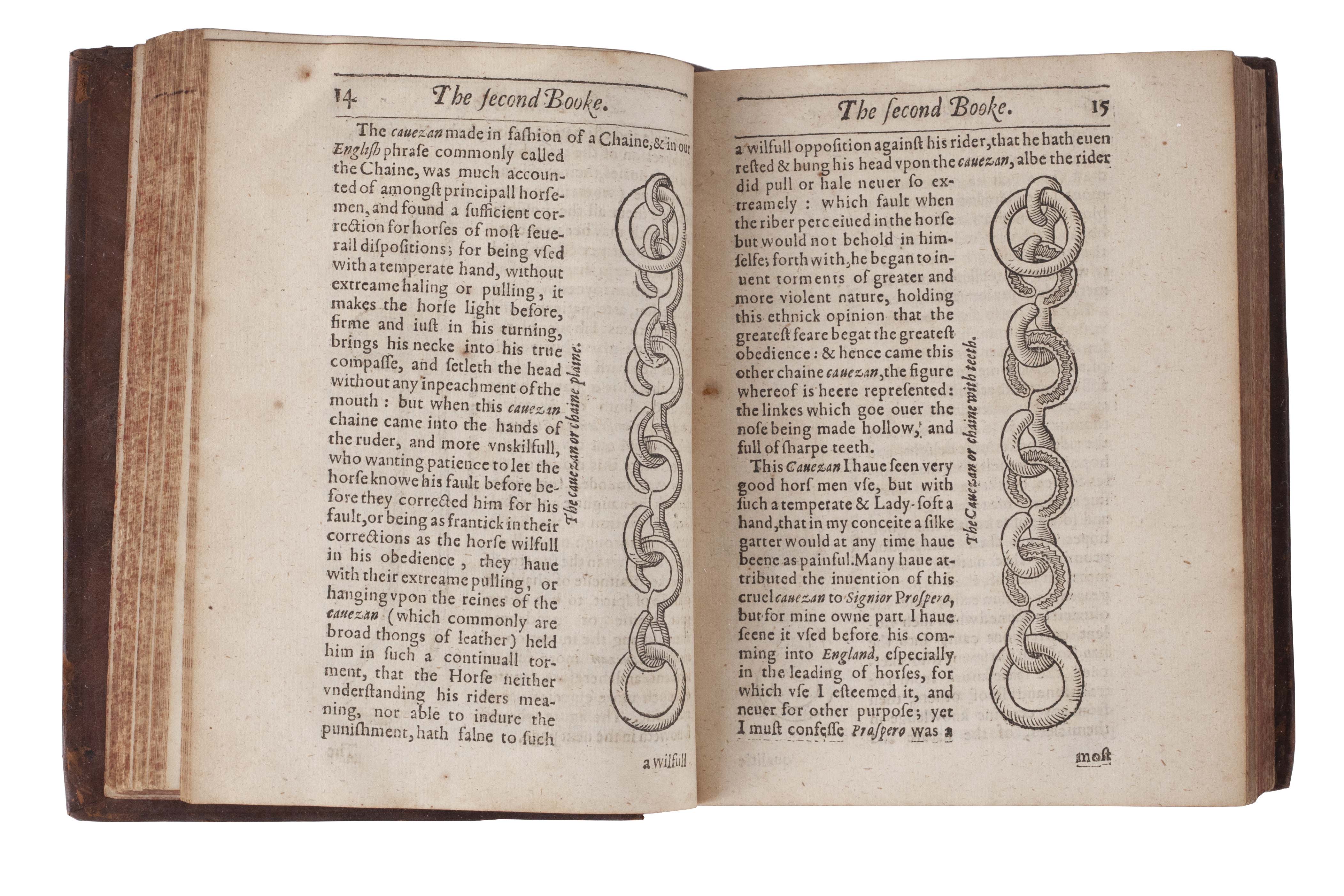 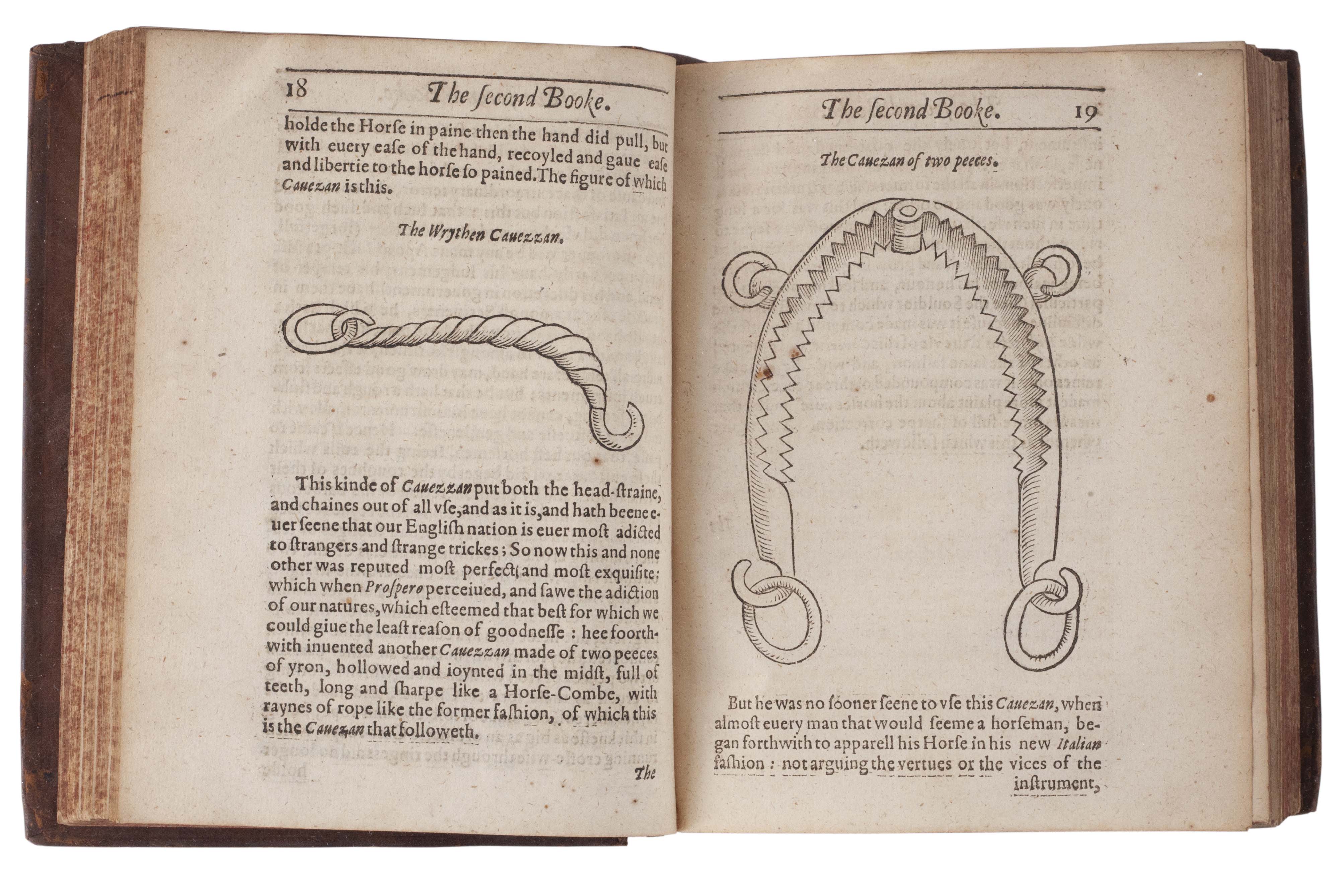 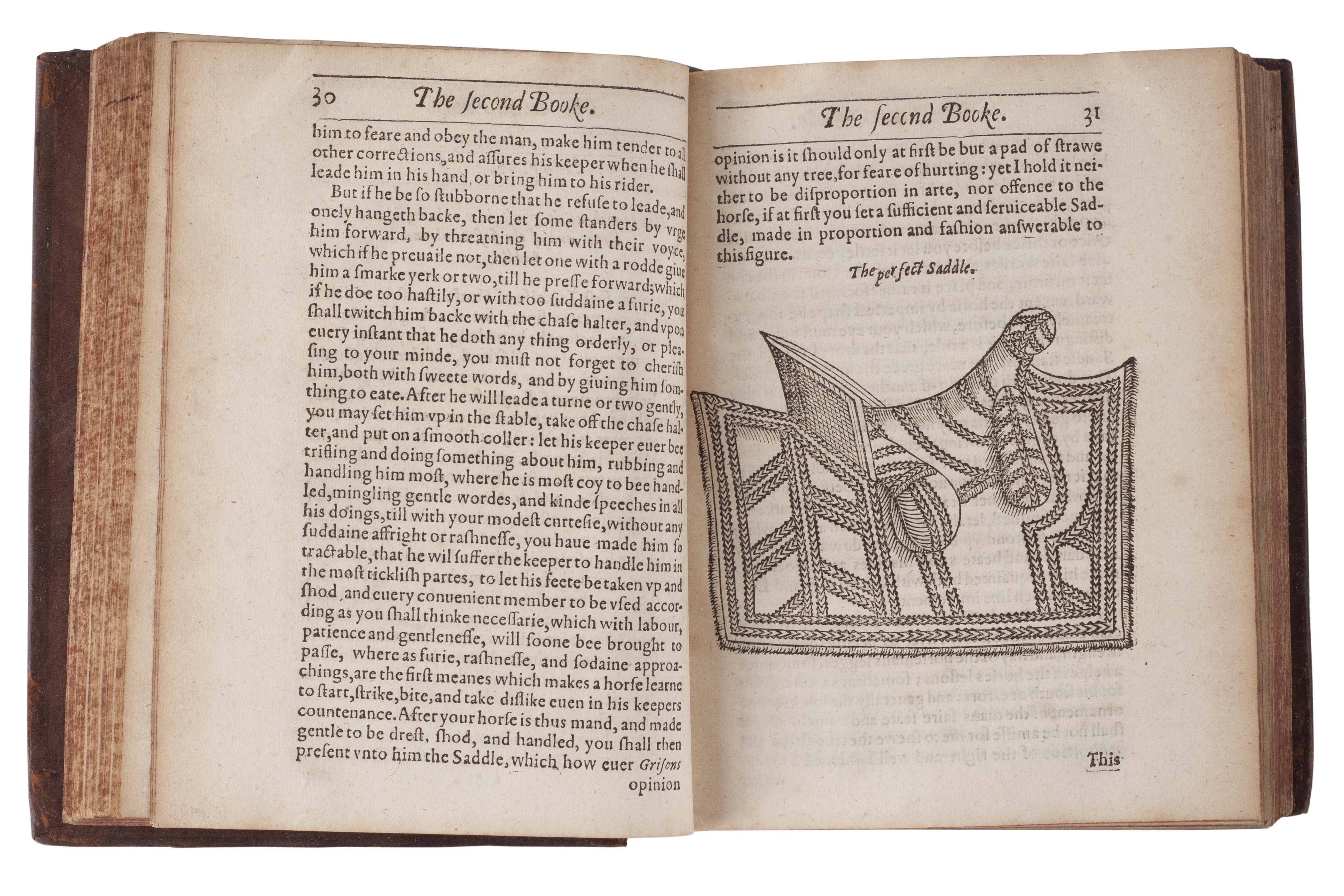 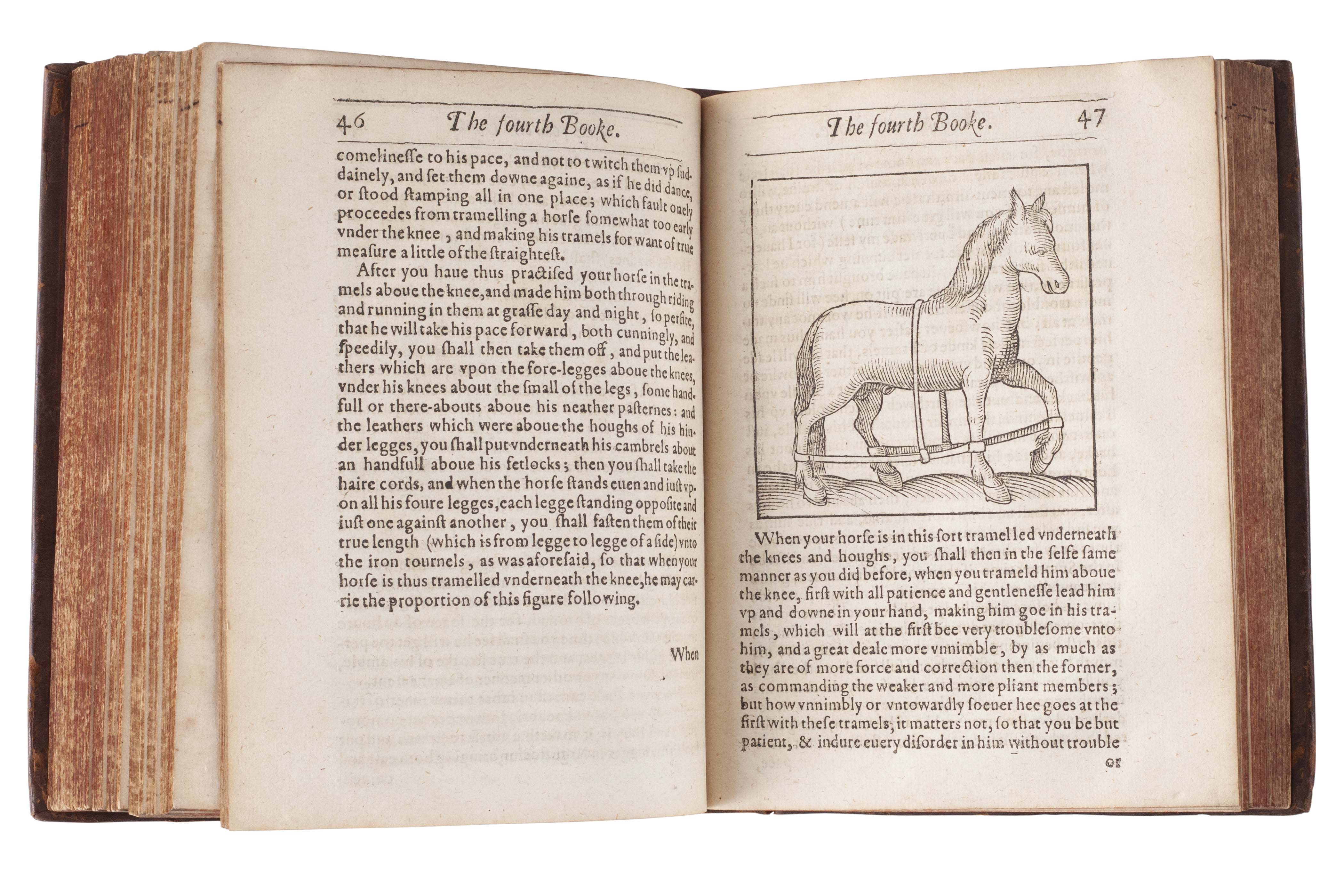 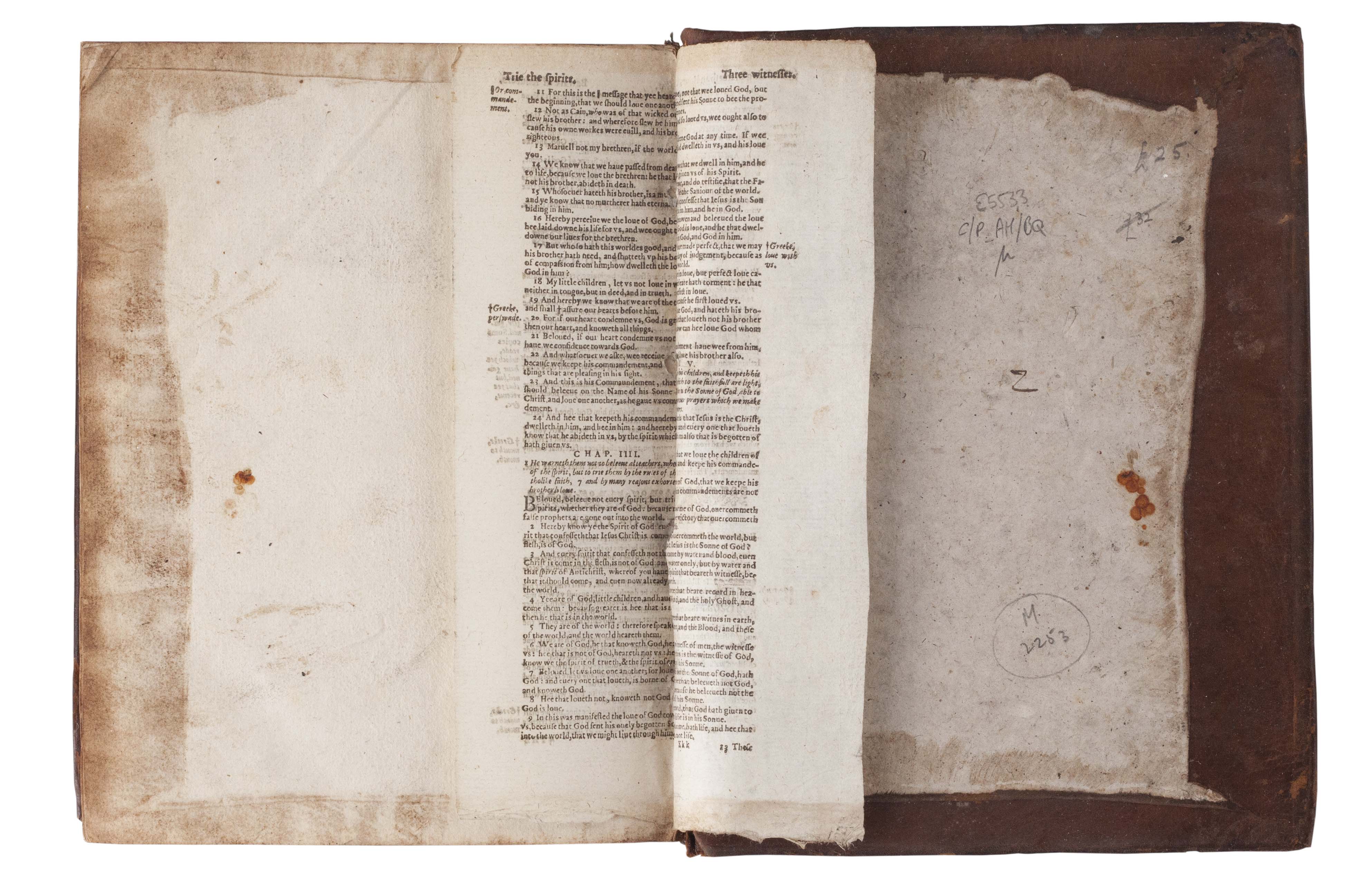 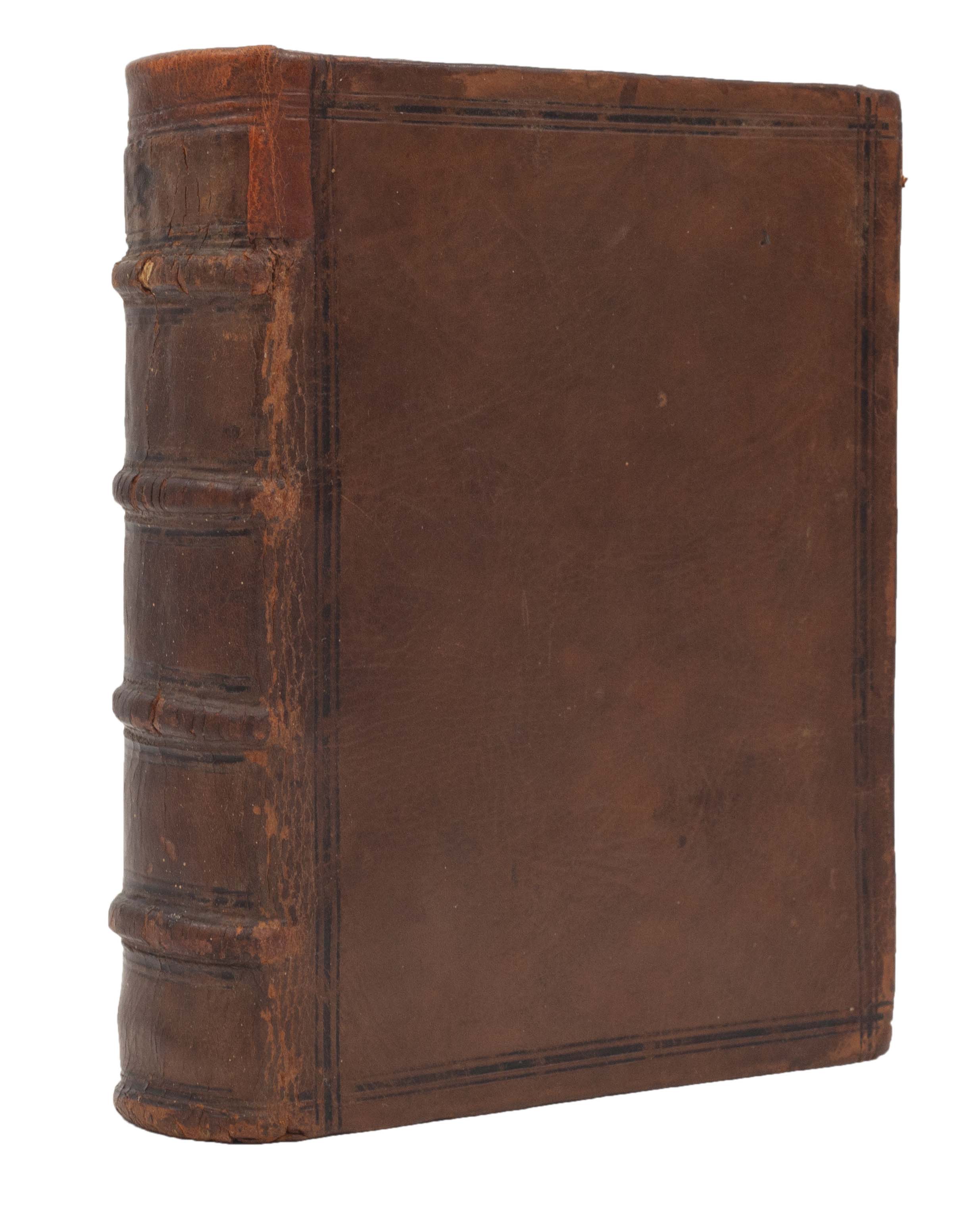 A beautiful copy of the second edition, ‘corrected and augmented’, of Markham’s Cavalarice, exceptionally well-preserved in a contemporary binding, from the library of the antiquary Sir John Marsham.

Among Markham’s many published works on equestrian subjects, Cavalarice is no doubt the most comprehensive and substantial. Likely written during his agricultural exile in the aftermath of Essex’s execution in 1601 and first published in 1607, the work divides the knowledge of horses into eight books, among them breeding, training, stabling, and farriery, as well as books on hunting- and racing-horses. Of these the first and second books, on breeding and training respectively, are most extensive, and proved particularly influential in dismissing superstitions of earlier authors and rejecting the crueller practices suggested by Italian writers on horsemanship.

Markham’s Cavalarice remained popular throughout the seventeenth century, and his work on farriery, Markham’s Maister-Peece (1610), was revised and reprinted well into the nineteenth. These works undoubtedly owed much of their success to his clear style, extensive experience, and scholarship. It was presumably out of opportunism that Markham published the present work as eight parts, allowing him to include dedications to seven potential patrons, prime among them Charles, Prince of Wales (originally written for Charles’s elder brother, Henry).

Markham’s career is far broader, however, than might be suggested by the numerous works on horsemanship. He is known to have lived as a farmer for several years after the fall of his patron the Earl of Essex, to have seen military service in the Netherlands, and to have published poetry, prose, and plays with some success, leading to speculation that he is the poetic rival mentioned in Shakespeare’s sonnets (Gittings, Shakespeare’s Rival, 1960). Ever ostentatious, he entertained Elizabeth I with his feats of horsemanship and, for his final venture, tried to raise funds by walking from London to Berwick without bridges, nor ‘boats, Shippe, or other Ingin for water more than an ordinarye Leape staffe or staffe to leape with all neither shoulde swyme any water whatsoever’ (ODNB). He died, nonetheless, in poverty.

Provenance: The present copy is inscribed by the noted antiquary John Marsham (1602–1685). BOO observes that, although Marsham’s will does not mention any books, there are two early bookplates attributed to him (cf. Franks and Lee), ‘one of which was also used as an engraving in a book of 1649’. We note one other book with his inscription, dated 1647, presented to him by John Donne, which appeared at auction (Christies, 3 March 2004, lot 27).

The two leaves of printer’s waste, used here as guards for the endpapers, are taken from the King James Bible. We have not been able to identify this particular edition, though it is remarkably close to other settings mostly dating to around 1630. The texts present are 1 John 3:11 to 3 John 14 (leaf 3K1) and the apocryphal 2 Maccabees 7:5 to 8:31 (leaf 3B1). 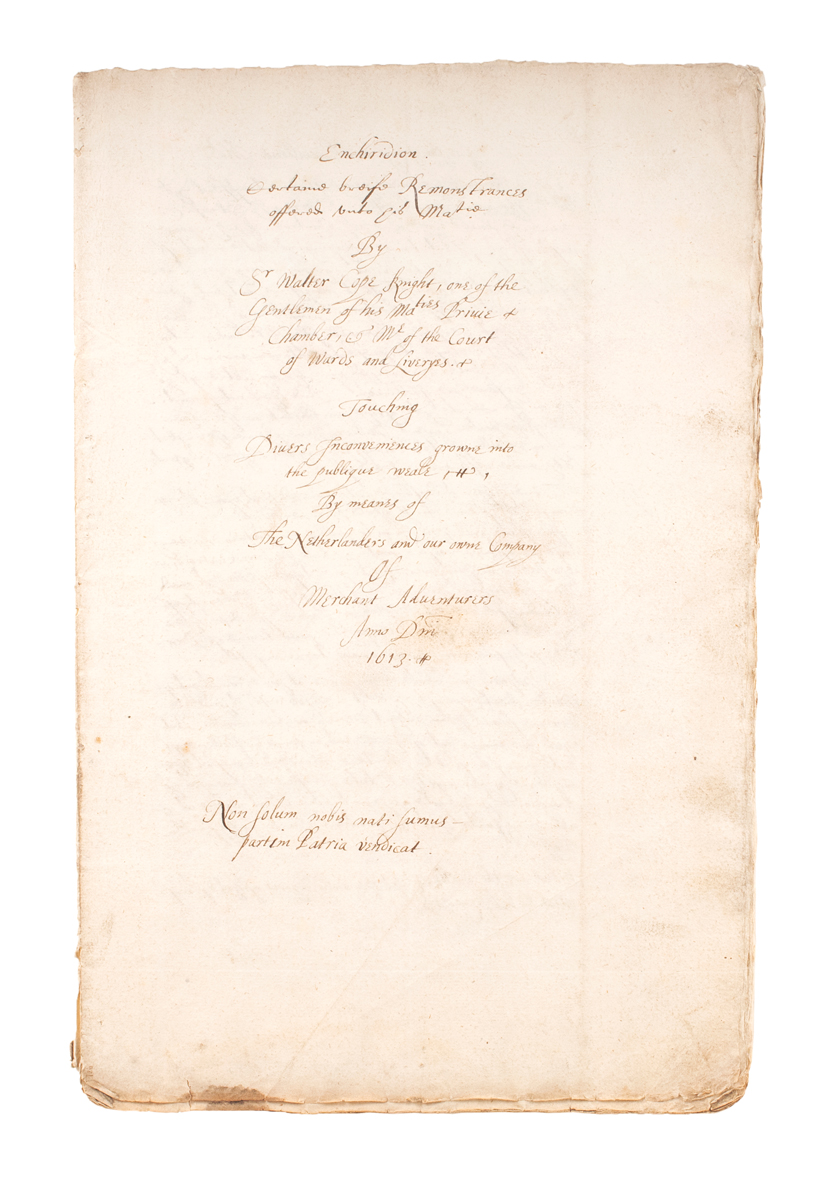 ‘Enchiridion. Certaine breife Remonstrances offered unto his Ma[jes]tie … Touching divers Inconveniences growne into the publique Weale by meanes of The Netherlanders and our owne Company of Merchant Venturers’. 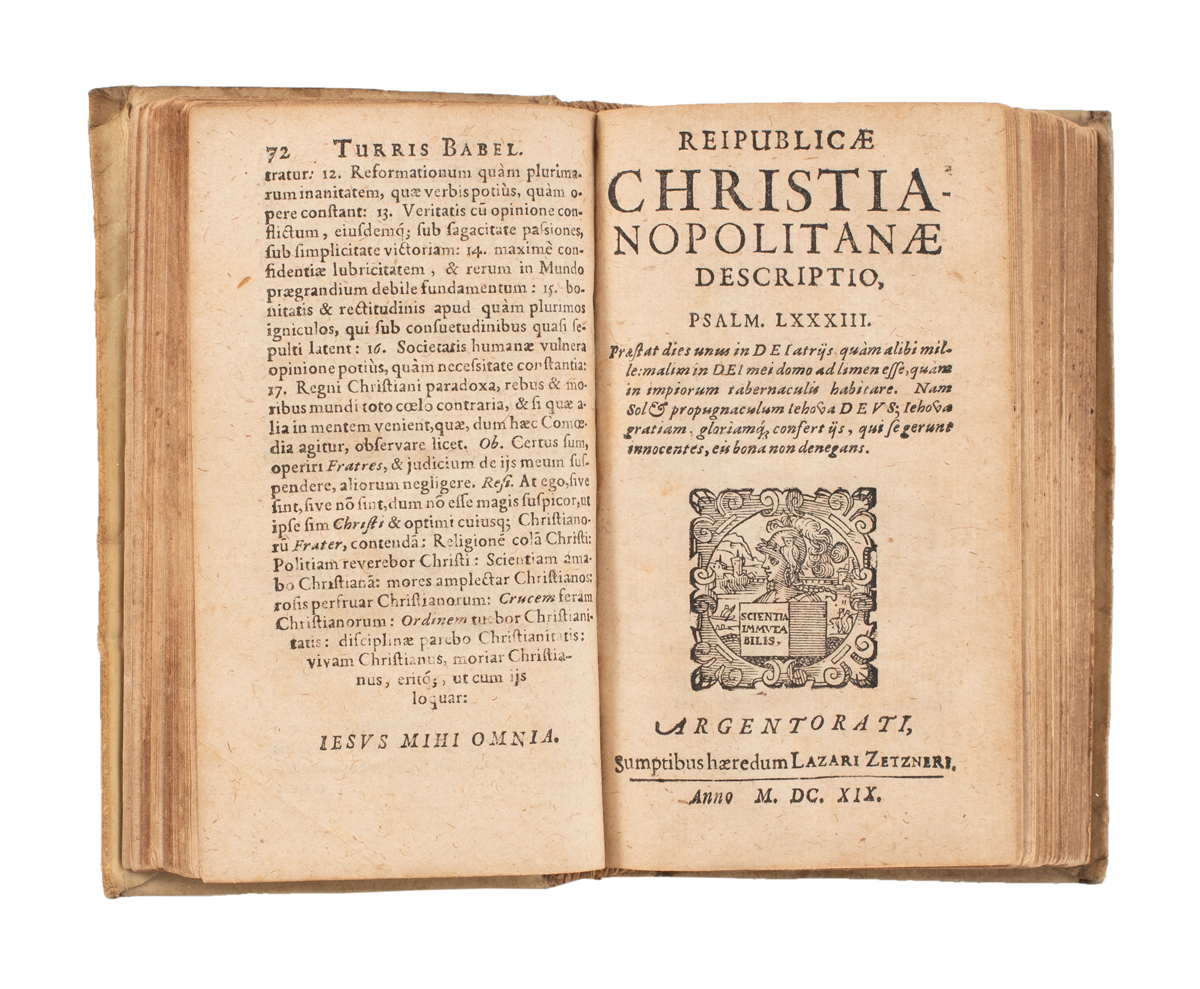