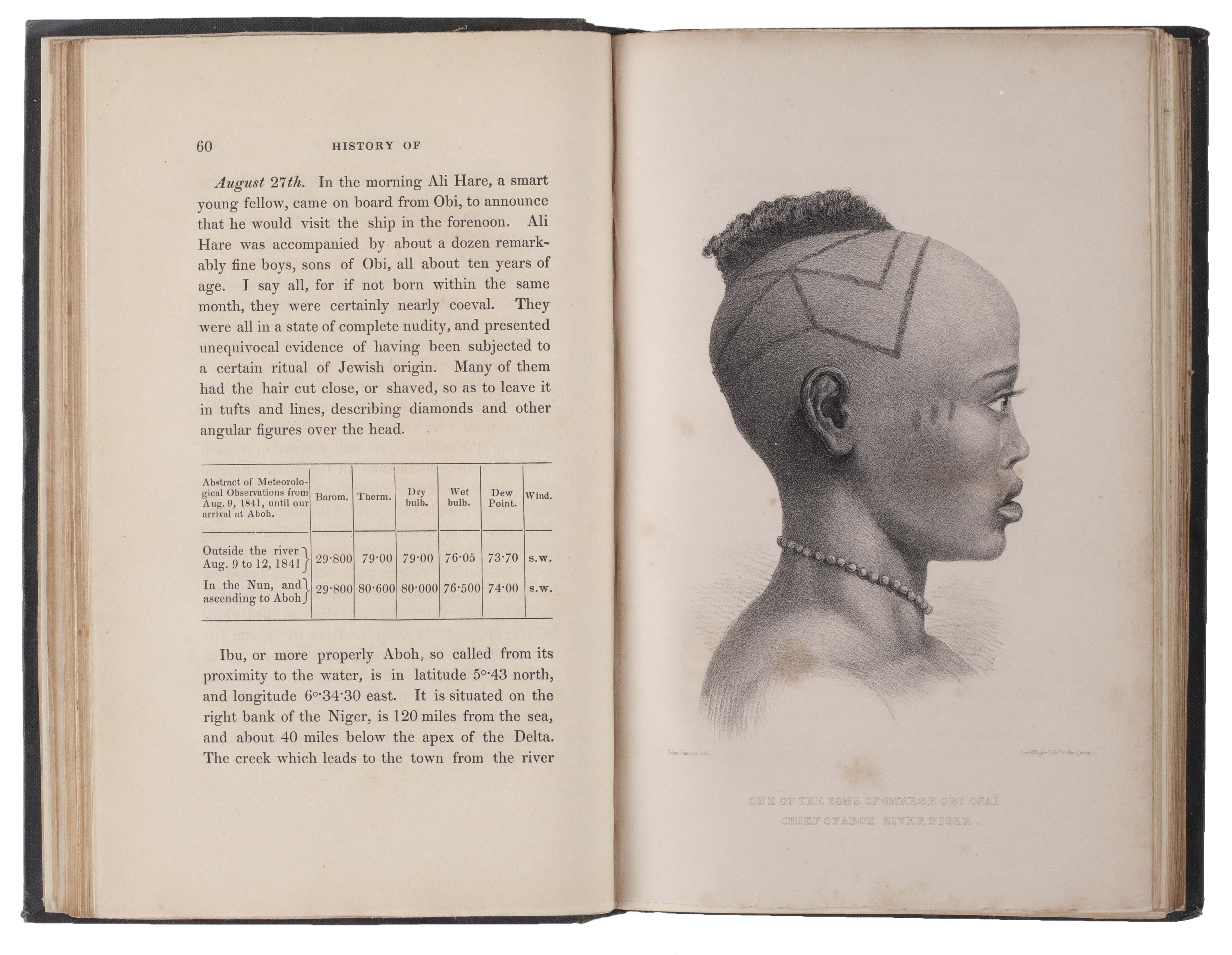 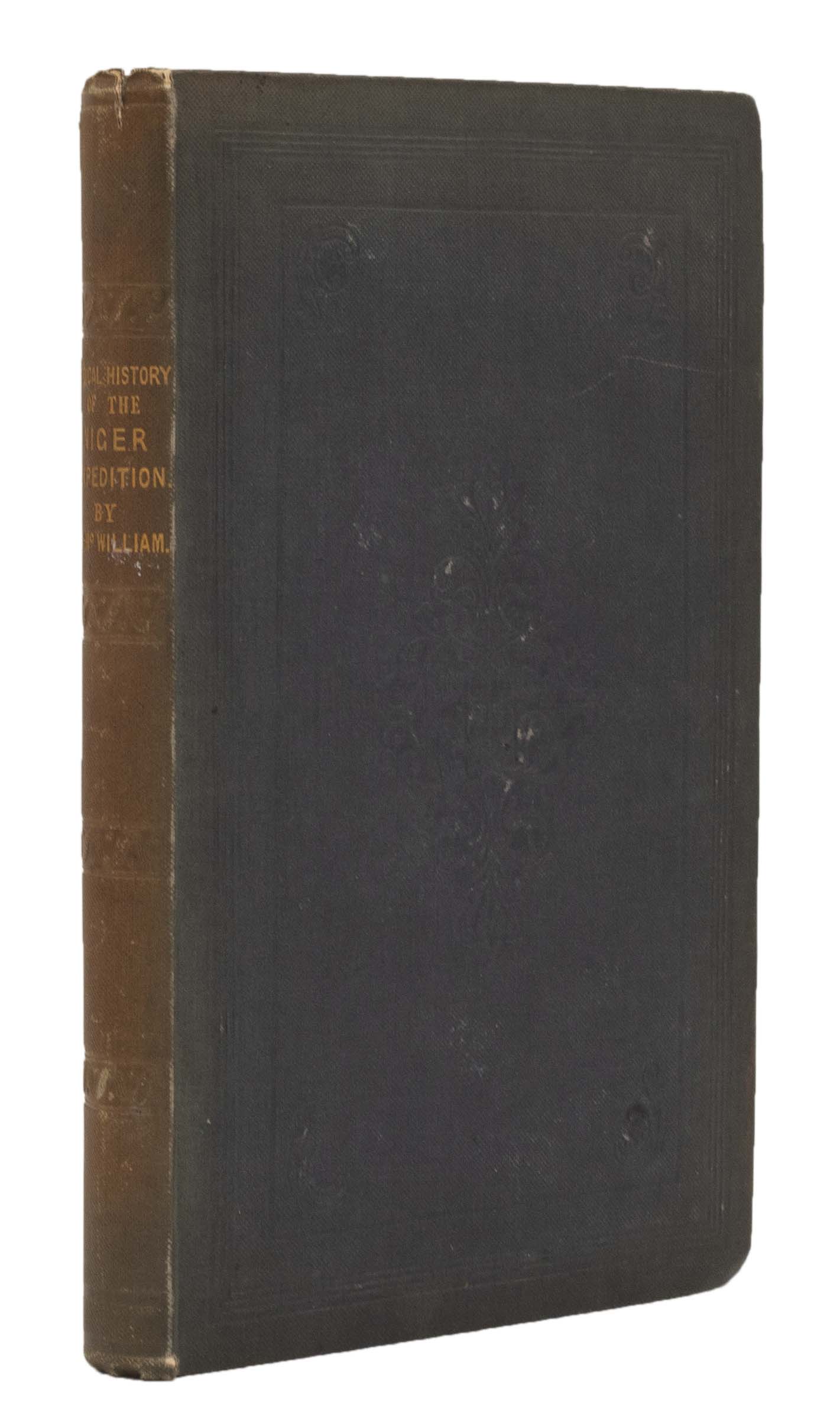 8vo (225 x 141 mm), pp. viii, 287, [1 (blank)]; lithographic frontispiece with later guard and one lithographic plate by Day & Haghe after John Duncan, one hand-coloured lithographed geological cross-section by John Arrowsmith after William Stanger, one folding engraved map by Arrowsmith of the lower course of the river Niger and the route of Captain Trotter’s expedition, one full-page woodcut diagram showing the ventilation of ships based on the vacuum principle, and letterpress tables in the text; some light spotting affecting plates and map, map slightly creased at edges; original dark green publisher’s cloth, boards blocked in blind with central diamond-shaped arabesques enclosed within single rule panels with foliate cornerpieces, border of four rules, spine divided into 5 compartments by blind rolls, lettered in gilt in one, modern lemon-yellow endpapers, uncut; spine lightly faded and with short splits at head, extremities lightly rubbed, corners bumped, otherwise a very good copy of a rare work in the original cloth; provenance: occasional pencil markings and annotations.

Added to your basket:
Medical History of the Expedition to the Niger during the Years 1841-2. Comprising an Account of the Fever which Led to its Abrupt Termination.

Yellow fever was the American plague of the eighteenth and nineteenth centuries – one tenth of the population of Philadelphia fell victim to the disease in 1793 while its vicious outbreaks in New York City prompted the foundation of the New York Board of Health; but it also coincided with the peak of the international slave trade and was closely connected with modern developments in epidemiology, hygiene and quarantine. Naval medical officers like McWilliam were instrumental in this history: their need to ensure the health of crews in a self-contained environment, combined with the opportunity to observe outbreaks of diseases in different regions and climates, accelerated the pace of their medical advances. McWilliam’s role within medical history would have been impressive even without the yellow fever outbreak: this voyage was the first to test the prophylactic use of quinine as an antimalarial measure. With his intelligent actions and composition of this book, McWilliam wrote medical history. The Medical History of the Expedition to the Niger ‘supplies a history of the fever, description, morbid anatomy, sequences, causes, treatment, with cases; besides an account of the state of medicine among the blacks and of vaccination; a description of the ventilation of the ships, which was carried out on the plan adopted by Dr. Reid for the houses of parliament; an abstract of meteorological observations; and a brief account of the geology of the Niger, condensed from the notes of Dr. Stanger’ (ODNB).

Later, McWilliam not only received the Blane Gold Medal in recognition of his exemplary ‘Journal of Practice’ (awarded 1843; established in 1829 by Sir Gilbert Blane ‘for the best journal kept by the surgeons of His Majesty’s Navy’), but was also made medical officer to the Custom House (from 1847), and elected a Fellow of the Royal Society (1848) and the Royal College of Physicians (1859). McWilliam was also instrumental in the formation and development of the Epidemiological Society from 1850 onwards.