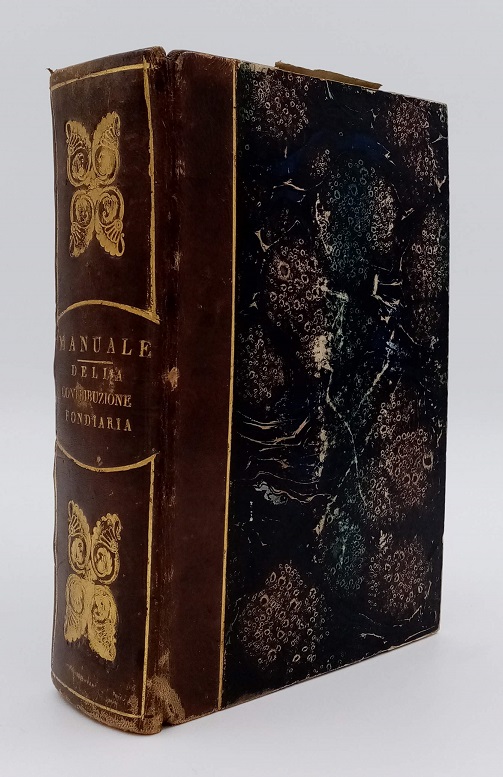 First edition. In two parts, the first of which sets out the basis of property taxation, while the second treats the collection and transmission of sums owing, this manual prints the legislation in force in the nearer Neapolitan part (always described as ‘This side of the Lighthouse’, whereas Sicily itself and parts of the Southern mainland were ‘The other side of the Lighthouse’) of the Kingdom of Naples and the Two Sicilies as of 1835.

In the law of 8 August 1806, a large number of old taxes, many with a restricted local ambit, were abolished in favour of a new contribuzione fondiaria, a property tax based on net annual revenue from the property. Subsequent regulation, in the form of the Royal Decree of 10 June 1817, letters, and other instruments, amplified the extent and conditions of imposition of this new tax. The manual prints this material, pp. 5–256, where it is followed by a 60-page alphabetical index organized under topic and referring the reader to relevant passages of the regulations. The second part of the manual, dealing with the mechanics of collection, with the various agencies and officials involved and with the treatment of late payment etc., is organized on the same basis. The regulations are printed pp. 1–417, and from pp. 419 to 570 there follows an index of topics; pp. 571–84 give new regulations introduced while the manual was at the printers; p. 585 gives errata. At the end of the second part come examples of 35 different official forms to be used in connection with the contribuzione fondiaria. Each form has printed on it the page of the manual which refers to it.

It is safe to assume that a copy of this manual enjoyed a necessary presence in the libraries of lawyers, tax consultants, tax gatherers, property agents, officials of the Treasury, landowners, merchants etc., in the Kingdom. However, while widely held in Italian libraries, OCLC records not a single copy, even in digital form.

Letters of the Honourable Algernon Sydney to the Honourable Henry Savile, Ambassador in France, in the Year 1679, &c., now first printed from the Originals in Mr. Sydney’s own Hand.

First edition of Sydney’s letters reporting on English politics. The republican political writer relates court happenings to Henry Savile (1642–1687), envoy-extraordinary in Paris. The text discusses the events relating to the Earl of Essex, Duke of Monmouth, and Lords Russell and Howard, with whom Sydney soon after entered the treasonable discussions for which he was executed in 1683.

THE WAILINGS OF A BEATEN DOG STUART, Andrew.

First edition, the octavo issue, of Stuart’s attack on Lord Mansfield. A bitter dispute lasting begun in 1761 over the inheritance of the extinct duchy of Douglas, the Douglas Cause was appealed in the House of Lords in 1769, where the Lord Chief Justice, Lord Mansfield, disparaged Stuart’s integrity as a lawyer. ‘Stuart revenged himself on Lord Mansfield with a savage, privately distributed polemic, Letters to Lord Mansfield (1773), which alleged Mansfield’s bias towards the Douglas claim. The Letters was widely admired, although Samuel Johnson compared it to “the wailings of a dog that had been licked”’. (ODNB).