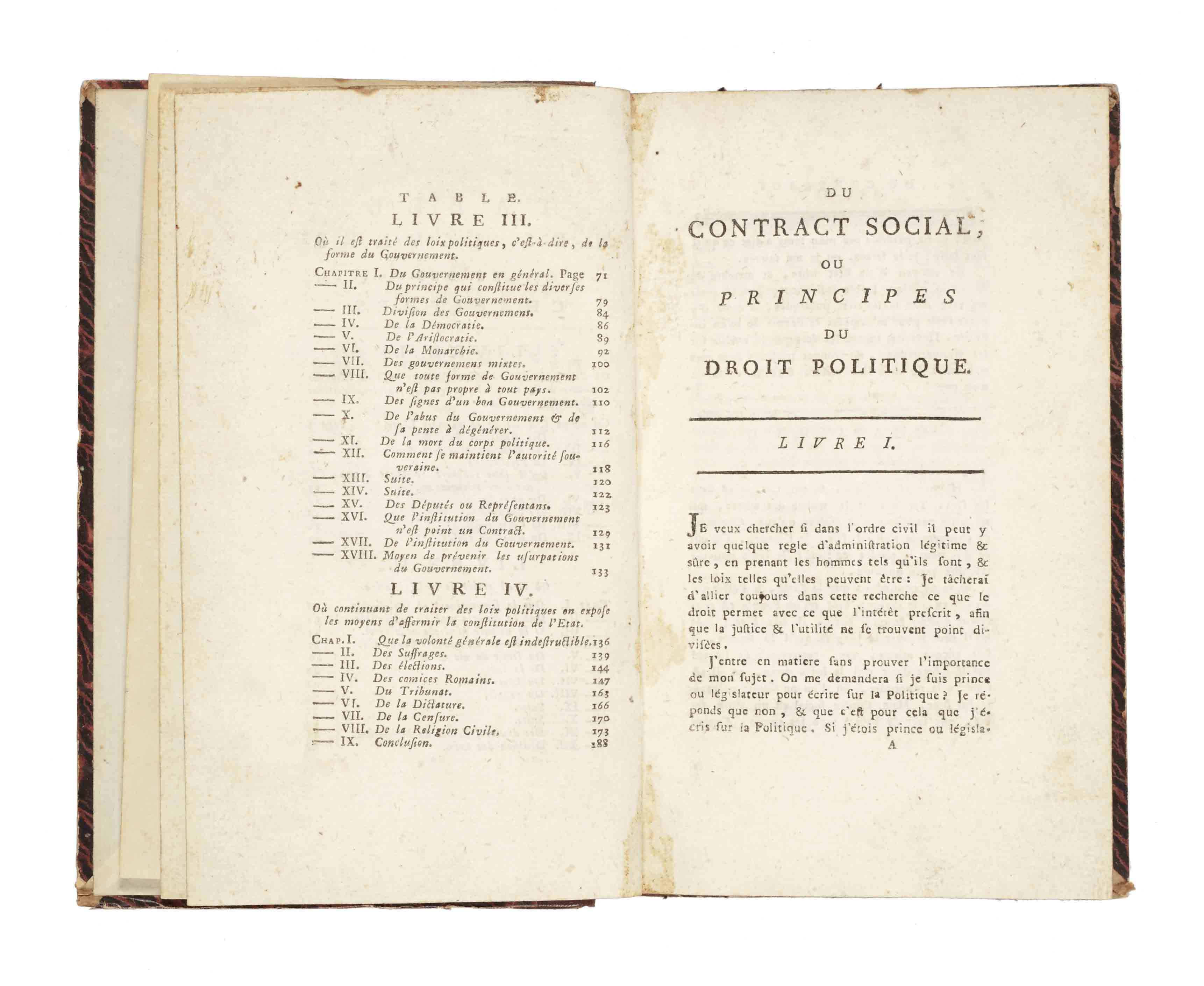 8vo, pp. [4], 188; with Avertissement on the verso of the title-page; title-page a little spotted, else a clean, crisp copy in near-contemporary quarter calf, marbled boards, flat spine decorated and lettered in gilt; edges a little rubbed, a few scratches to the sides; contemporary pen monogram and a modern ownership inscription on the front free end-paper.

‘[Rousseau’s] fundamental thesis that government depends absolutely on the mandate of the people, and his genuine creative insight into a number of political and economic problems, give his work an indisputable cogency. It had the most profound influence on the political thinking of the generation following its publication. It was, after all, the first great emotional plea for the quality of all men in the state: others had argued the same cause theoretically but had themselves tolerated a very different government. Rousseau believed passionately in what he wrote, and when in 1789 a similar emotion was released on a national scale, the Contrat social came into its own as the bible of the revolutionaries in building their ideal state. Still in print, translated into every language in cheap editions and paperbacks, it remains a crucial document of egalitarian government’ (PMM 207, describing the original edition of 1762).

Observations on Mr. Whitbread’s Poor Bill, and on the Population of England: intended as a supplement to A Short Inquiry into the Policy, Humanity, and Past Effects of the Poor Laws, &c.

First edition of each work. The barrister John Weyland (1774–1854) ‘was a well-to-do man whose landed possessions were extensive enough for him to be a magistrate in three counties, Oxfordshire, Berkshire and Surrey’ (James, p. 372). In 1807, he wrote two works supporting the poor laws, entitled A Short Inquiry into the Policy, Humanity, and Past Effects of the Poor Laws and Observations on Mr. Whitbread’s Poor Bill. A third work on the subject, The Principles of Population and Production followed in 1815. The following year marked the appearance of his 500-page magnum opus, the controversial Principles of Population and Production, a work of sufficient merit to provoke an immediate reply from Malthus in his Additions to the Fourth and former editions of an Essay on the Principle of Population (1817).