Added to your basket:
Report … to the Right Hon. the Secretary of State of the Home Department concerning the Fire which occurred at the Theatre Royal, Exeter, on the 5th of September 1887 …

First edition of Shaw’s account of the disastrous fire at the Theatre Royal, Exeter, in 1887.

Shaw (1828-1908), superintendent of the Metropolitan Fire Brigade, was responsible for introducing numerous advances in fire safety in London, particularly to public venues. His treatise Fires in Theatres (1876, second edition in 1889), was followed by a ‘massive report’ on that subject in 1882 (Oxford DNB). His personal bravery in the role was matched by his easy mingling with the notables of the age, and he is now best remembered for a tribute in Gilbert and Sullivan’s Iolanthe.

The theatre in Exeter was rebuilt in 1889 to new, more fire-conscious designs by Alfred Derbyshire (1839-1908), himself an amateur actor.

Astley’s System of equestrian Education, exhibiting the Beauties and Defects of the Horse, with serious and important Observations on his general Excellence, preserving him in Health, Grooming, &c.

Fifth edition of a work on horse-training by the ‘father of the modern circus’ (Chambers). Noted during military service in the Seven Years’ War not only for his daring in battle but also for his skills as a rider and breaker of horses, Philip Astley (1742-1814) established on his return to London a riding school on the south bank of the Thames opposite Westminster, where his displays of trick-riding, punctuated by comic interludes, drew much attention: ‘Styling himself the English Hussar, he promised such feats as straddling two cantering and jumping horses, doing headstands on a pint pot on the saddle … Mrs Astley would perform several of the turns … developing her own specialism in mounted apiculture’ (ODNB). His yard soon developed into an amphitheatre, and winter tours around Britain and Europe led to the establishment of theatres under his name in Dublin and Paris. 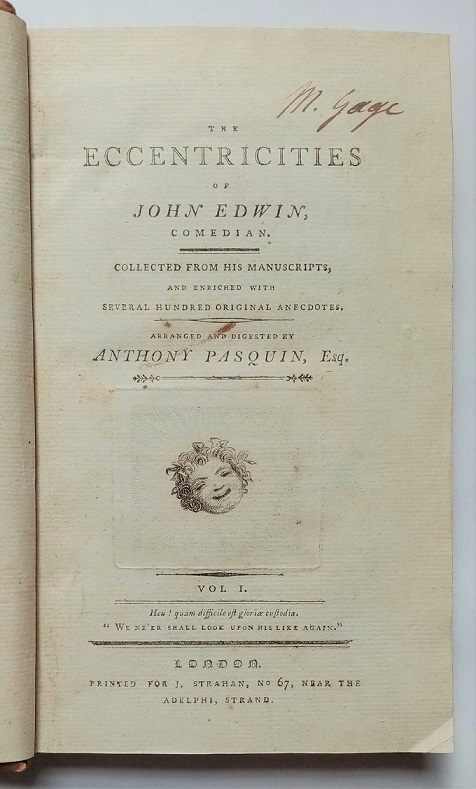 The Eccentricities of John Edwin, Comedian. Collected from his Manuscripts, and enriched with several hundred original Anecdotes …

First edition of the earliest biography of the actor and singer John Edwin the elder (1749-1790), written by his friend, John Williams, journalist and author of the satirical collection of verse portraits The Children of Thespis (1786). Williams published both works under the pseudonym ‘Anthony Pasquin’ (Oxford DNB).