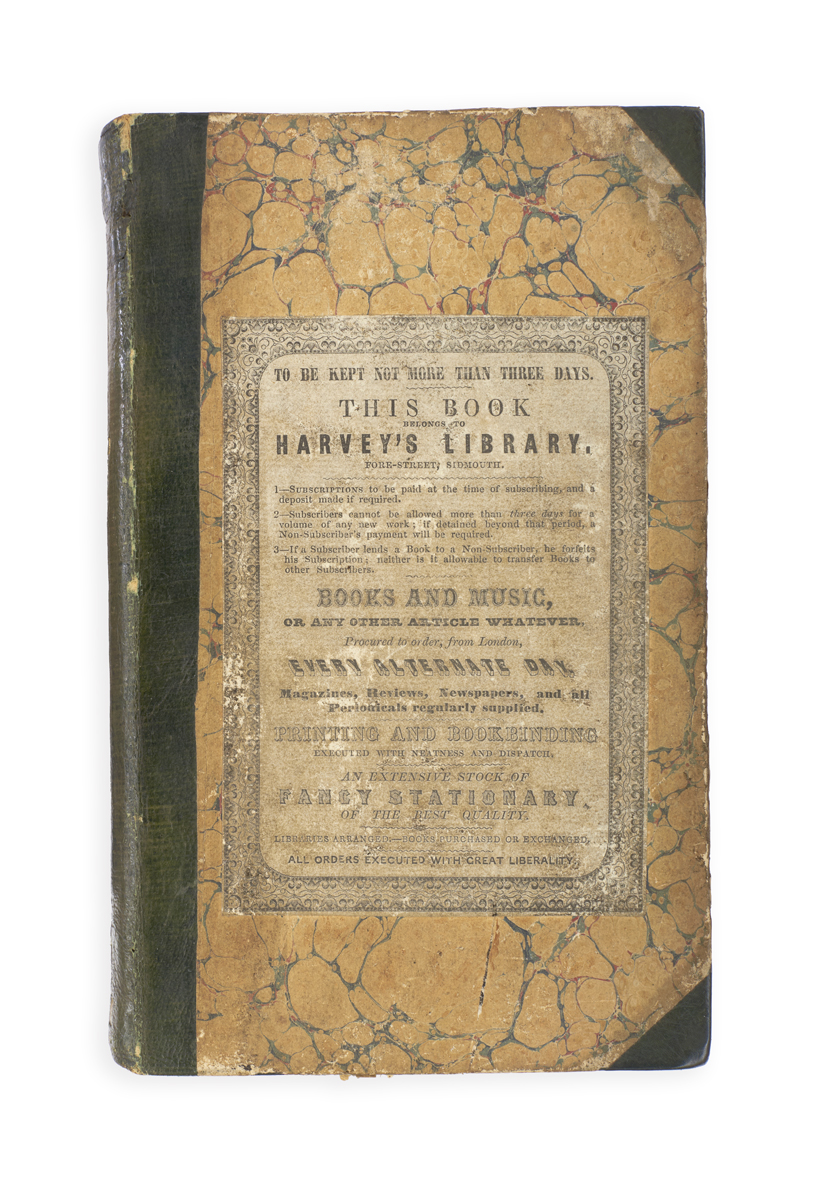 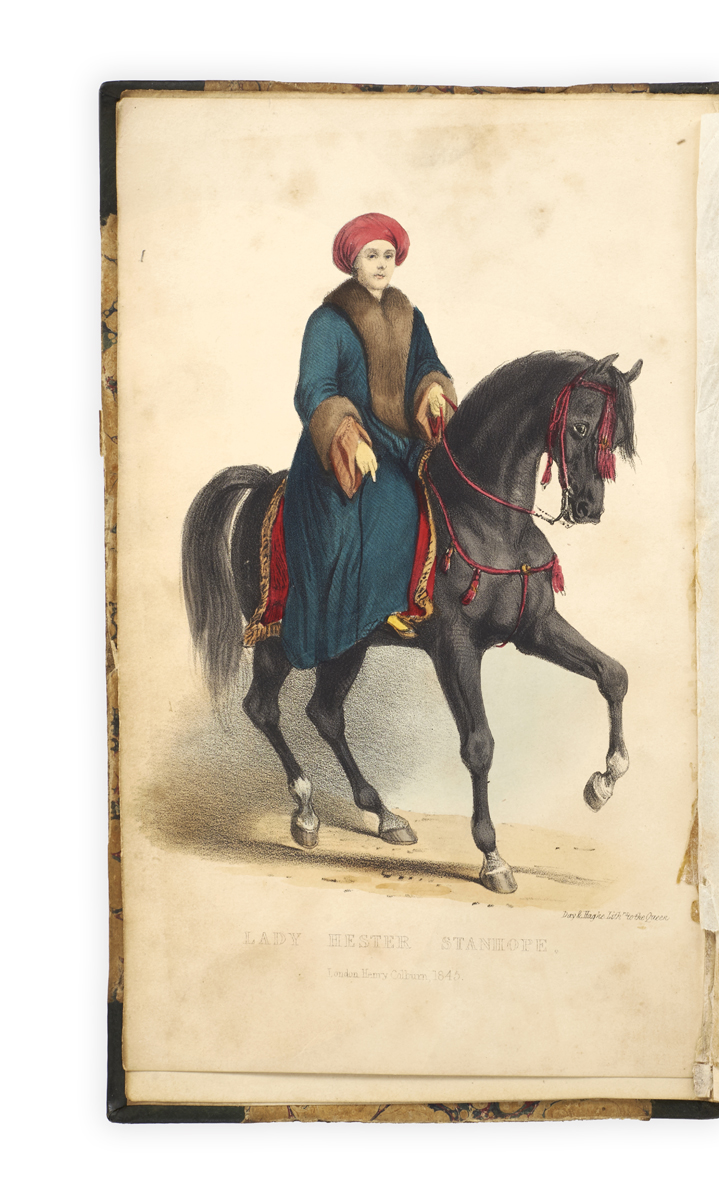 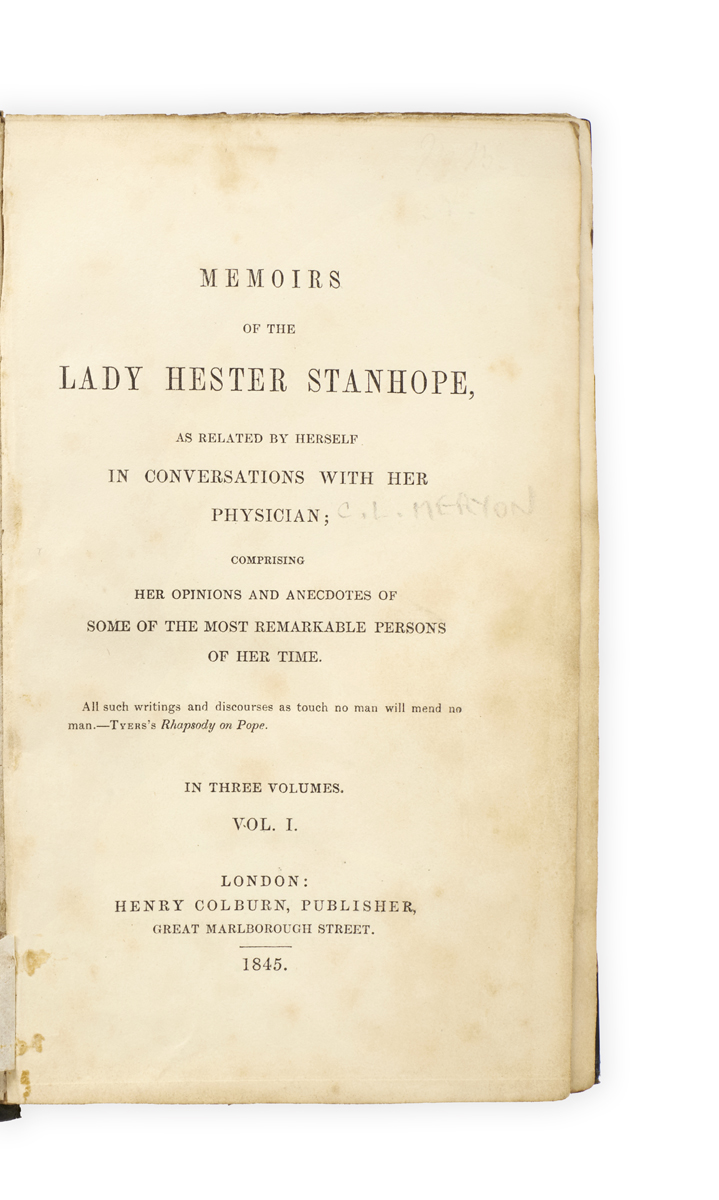 3 vols, 12mo, pp. I: xvii, [3], 394, II: vi, 384, III: vii, [1], 361, [1], with a lithographed frontispiece in each volume (the portrait of Stanhope in volume I hand-coloured), each with tissue guard, one lithographed folding plan of Stanhope’s ‘Residence at Joon’; some scattered foxing but a good set, edges untrimmed, in contemporary half green roan with marbled sides, large printed label to upper board of vol. III of Harvey’s Library, Sidmouth, the spines also thus stamped and numbered (labels removed from the other boards, and from endpapers).

Added to your basket:
Memoirs of the Lady Hester Stanhope, as related by herself in Conversations with her Physician; comprising her Opinions and Anecdotes of some of the most remarkable Persons of her Time …

First edition, the entertaining memoirs of the Middle East traveller Lady Hester Stanhope (1776–1839).  Having looked after her uncle, William Pitt, during most of her youth and run his household while he was Prime Minister for the second time, Stanhope left for the Levant in 1810.  She took with her a companion, Miss Williams, and her physician, Charles Meryon, who attended her for the first seven years and later revisited her on three occasions in 1819, 1830, and 1837-8.

‘After a couple of months in Malta, a year in and about Constantinople, and a shipwreck off Rhodes, Hester and Michael [Bruce, with whom she had begun an affair in Malta] reached Cairo, where Mehmet Ali Pasha received them with honours and pageantry.  A tour in the Holy Land and Lebanon followed’ (ODNB).  She entered Damascus on horseback in male Turkish clothes, making a great sensation, then became the first European woman to visit Palmyra, in the company of the Bedouins.  In 1814 she settled at Mar Elias, and then after few years, increasingly in debt and increasingly eccentric, ‘she moved to Dar Jun, a more remote spot higher in the hills, where she repaired an old building, added others, laid out gardens, and surrounded the whole with a wall.  Here she lived with an unruly household of some thirty servants and slaves for the rest of her life.’  She conceived a violent aversion to England, barely leaving the compound, but would talk late into the night with her few visitors, including Meryon; she died, having dismissed most of her servants, in June 1839.  In the Memoirs, Meryon ‘described with the utmost minuteness her complicated living arrangements, her tyranny, and her interminable conversations and cross-questionings, of which he himself was often a victim’ (ibid.).

Harvey’s Library, on Fore-Street, Sidmouth, was a subscription library on three-day terms.  Harvey also offered ‘Books and Music, or any other Article whatever, procured to order, from London’, periodicals, printing, and bookbinding, and ‘fancy stationary [sic]’.

FROM THE LIBRARY OF THE TUTOR TO MARIE-THÉRÈSE DE FRANCE SALMADE, Mathieu Antoine.

First edition, in an attractive binding for Madame de Montlouis, of this work on paediatrics and childcare by the French physician Mathieu Antoine Salmade (1766–1838), intended for mothers and nannies and covering the care of infants from birth to the age of four.  The first part deals with birth, dress and sleep, breast- and artificial feeding, choosing a wet nurse, diet, and exercise.  Salmade recommends loose clothing for newborns and little straw mattresses for their cradles, advises employing nannies with pear-shaped nipples for ease of breastfeeding, advocates giving children water ‘lightly reddened with wine’, and decries the use of leading strings for toddlers.  In the second part he examines infant maladies, including diarrhoea, whooping cough, worms, mouth ulcers, rickets, and smallpox, devoting a final chapter to vaccination, which he describes as ‘the best and most important discovery of this age’.