Two works bound in one volume, small 4to, ff. [xii], 196; [i], [5]-85; woodcut allegorical frontispiece to the first work, woodcut decorated initials to both works; very light toning, but very good copies, bound together in contemporary calf, rebacked, sides triple-filleted in blind with blind-stamped arabesque centrepieces; some contemporary annotations throughout.

The definitive edition, and that owned by Thomas Jefferson, of the first book devoted entirely to criminal law. First published posthumously in 1557 and based on Bracton and the Year Books, Les Plees deals in turn with offences, jurisdiction, appeals, indictments and defences. The third part is devoted to trials and convictions.

‘In 1543, according to a note in his fee book, Stanford entered the service of Lord Chancellor Wriothesley, who is known to have been his patron. [...] Notwithstanding the fall of Wriothesley, and his religious leanings towards Rome, in November 1552 he was created serjeant-at-law […] On 19 October 1553 Mary I appointed him one of the queen’s serjeants, and in that capacity he undertook with due fairness, but unsuccessfully, the prosecution of Sir Nicholas Throckmorton in 1554. […]

‘The greatest of his own books was Les plees del coron (1557), a textbook on criminal law. It was heavily based on the material gathered in the title ‘Corone’ in Fitzherbert’s Graunde Abridgment, arranged in chapters, in the form of a continuous text, with passages quoted from Glanvill, Bracton, and relevant acts of parliament. It was the first legal textbook in England to adopt the practice of citing specific authorities for every proposition, and as such had a major influence on legal literature, though it lacked the elemental clarity of Littleton’s Tenures, which was written by a judge of the same court a century earlier.

‘Stanford’s other principal book was his Exposicion of the Kinges Prerogative […] concerned with the property rights of the crown rather than with constitutional principles. […] Fulbeck justly said of Stanford’s books in 1600 that they were of: “force and weight, and no common kind of stile; in matter none hath gone beyond him, in method none hath overtaken him. And surely his method may be a law to the writers of the law which shall succeed him” (Fulbeck, 72–3).
‘Both works enjoyed several editions down to 1607, when they were printed together’ (J. H. Baker, in ODNB). 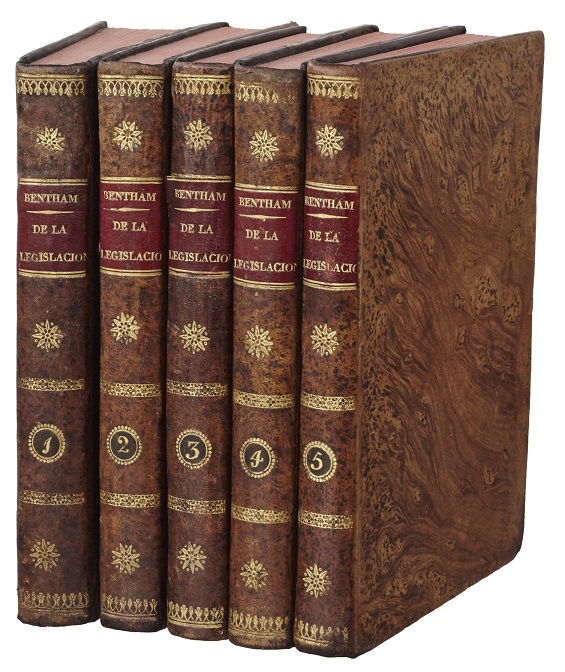 A very good copy of this Spanish translation of Bentham’s penal writings, translated from the second French edition of 1820, with an additional commentary, by the Spanish jurist and rector of Salamanca University, Salas y Cortés (1753-1837). This collection was first prepared and published in French by Étienne Dumont as the Traités de législation civile et pénale, and it established Bentham’s reputation as ‘the most important European writer on crime and punishment after Beccaria’ (Oxford DNB).

Sir Thomas Hope of Craighall (1573-1646) was called to the Scottish Bar in 1605 and soon rose to prominence. Following the accession of Charles I he became Lord Advocate and was in high favour with the King. He compiled an extensive collection of notes on statutes and cases in about 1633 (published by the Stair Society in 1937), and probably about the same time wrote this concise manual to the law of Scotland.

There are twenty-four chapters, dealing mainly with property and inheritance but also with legal procedures. Chapter 4 concerns executors ‘testamentar or dative’ (that is, whether appointed by a will or by a court); Chapter 6 ‘Of bands Harell & movell [contracts heritable and moveable] and there distinctions’; Chapters 8-14 the several sorts of heirs – spouses and children, male and female, wards, and bastards – and the order in which they succeed to an inheritance; Chapters 15-22, mainly jurisdiction and procedures; Chapter 24 ‘Of tailzies bands [entailments] & contracts of tailzies & of breakeing & improving yrof’.

This treatise was published in Edinburgh by Thomas Ruddiman as Hope’s Minor Practicks in 1736, when it was still of much use because the Scottish legal system was very different from the English even after the Act of Union.

A copy at the Clark Library, lacking the useful index, is dated 27 December 1669.