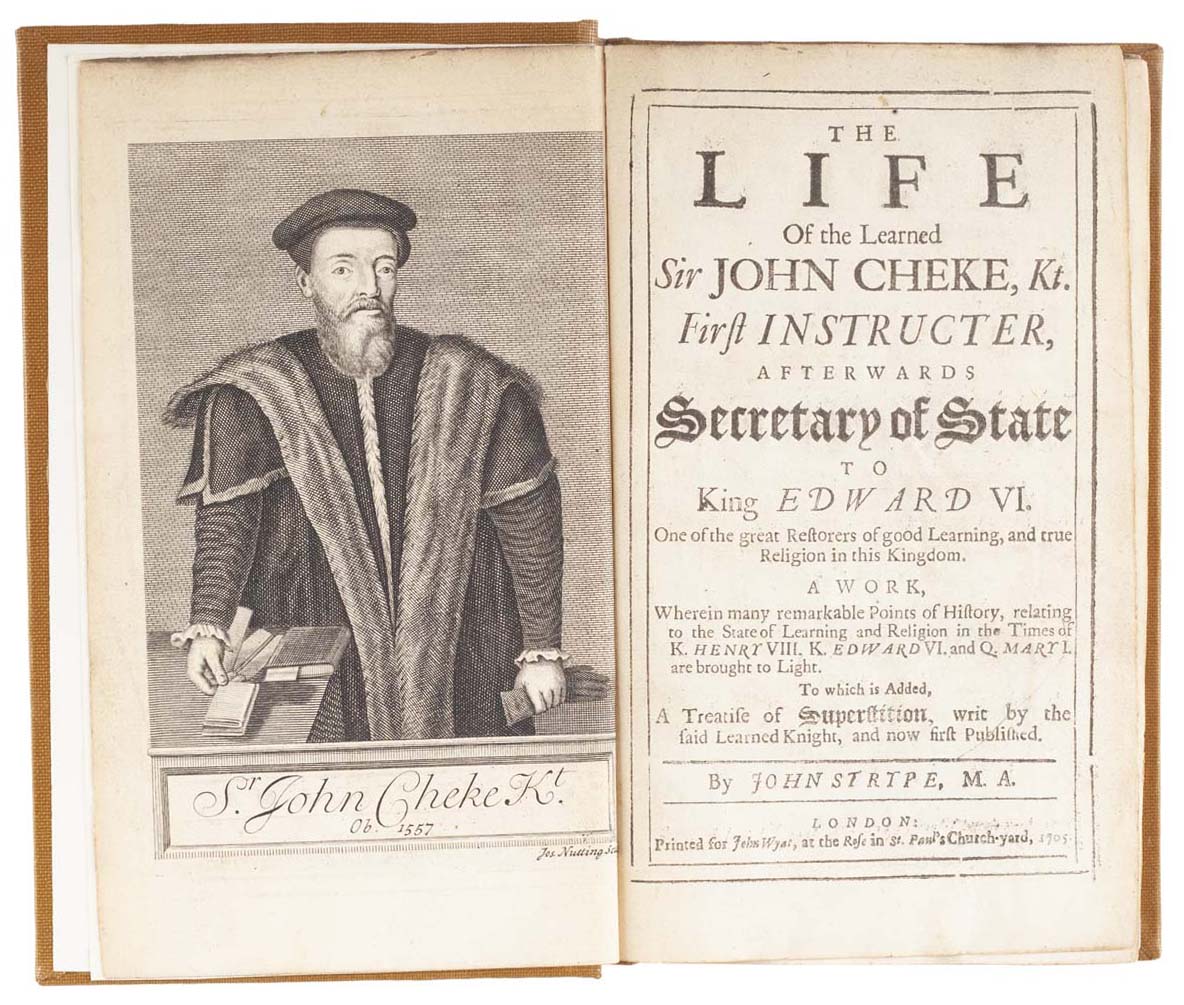 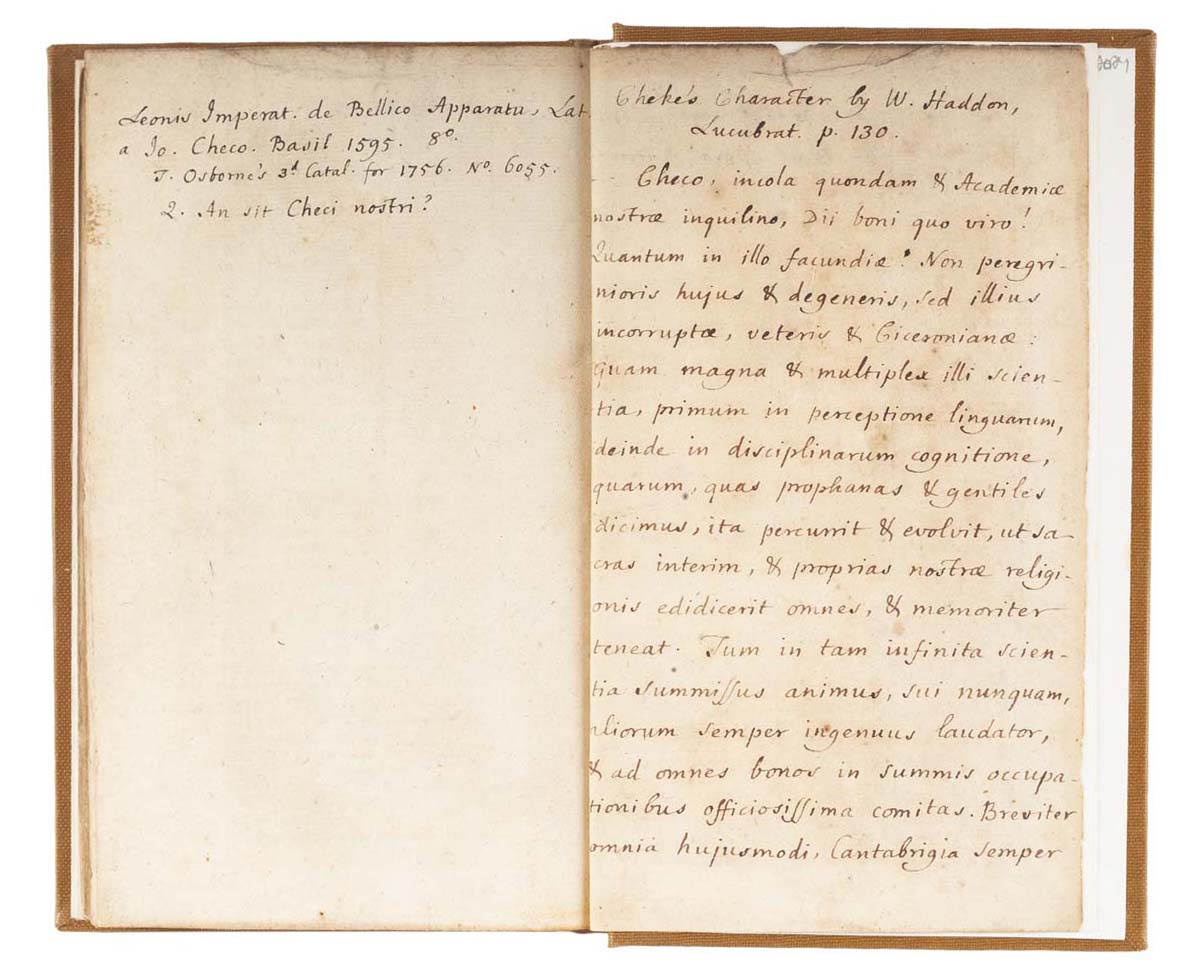 Added to your basket:
The Life of the learned Sir John Cheke, Kt., first Instructer, afterwards Secretary of State, to King Edward VI., one of the great Restorers of good Learning, and true Religion in this Kingdom … to which is added, a Treatise of Superstition, writ by the said learned Knight, and now first published.

Sir John Cheke (1514–1557) was admitted to St John’s College Cambridge in 1526, and served as the University’s last master of glomery until his appointment as its first Regius Professor of Greek in 1540; he held this post until 1551, in which period he was also appointed Public Orator (1542-1546) and Provost of King’s College (from 1548). Among his academic achievements are the introduction of Erasmian pronunciation of Greek to Cambridge (an effort for a while thwarted by the Chancellor, Stephen Gardiner), the authorship of new statutes for both Oxford and Cambridge, and an edition of two homilies by St John Chrysostom in 1543, which contained the first printing of Greek in England.

His greater influence, however, was derived from his position at court. Under Katherine Parr’s patronage he was appointed as tutor to Prince Edward in 1544, and he remained an intimate of the prince after his accession and throughout his reign (as, among several subsequent appointments, principal secretary). To Cheke can be attributed ‘Edward’s convinced, advanced Protestantism, which can be traced in his schoolboy exercises’ (ODNB). While at court Cheke continued his scholarship, including working on an English translation of the New Testament and two of the Book of Common Prayer, and attempting to acquire John Leland’s manuscript collection for the royal library. His involvement in attempting to thwart Mary’s accession led, unsurprisingly, to his arrest and, eventually, exile, which he spent travelling Europe lecturing and publishing anti-Marian propaganda until his arrest and return to England in 1556.

His high regard among contemporaries was maintained by Strype’s influential biography. In this copy an early reader has transcribed a short laudatory passage in Latin, titled ‘Cheke’s Character by W. Haddon’, concluding with an exhortation that ‘Cambridge ought always to rejoice in him’.

Provenance: with the bookplate of Sir Philip Sydenham (c. 1676–1739). Book Owners Online notes that Sydenham commissioned eleven plates between 1699 and 1738, varying with fashions, and that “no Englishman until Victorian times used as many bookplates” (quoting Lee, British Bookplates). Parts of his large library were likely dispersed during his lifetime, and the remainder in three sales after his death (1740, 1741, and 1743), but no record of the books contained survives.

A very attractive set of the first Ruddiman edition. One of the last works prepared by Thomas Ruddiman (1674–1757), this ‘superb edition of Livy’ (ODNB) was highly praised for its accuracy and is a fine testament both to his classical scholarship and to his printing house. The son of a Banffshire farmer, Ruddiman excelled in literary Edinburgh, establishing his own printing business in 1712, serving as Advocates Librarian (where he greatly expanded the library and was succeeded by David Hume), and publishing works of classical scholarship ranging from the Rudiments of the Latin Tongue, the standard schoolbook on grammar throughout the eighteenth century, to the Grammaticae latinae institutiones, the authoritative text for scholars.