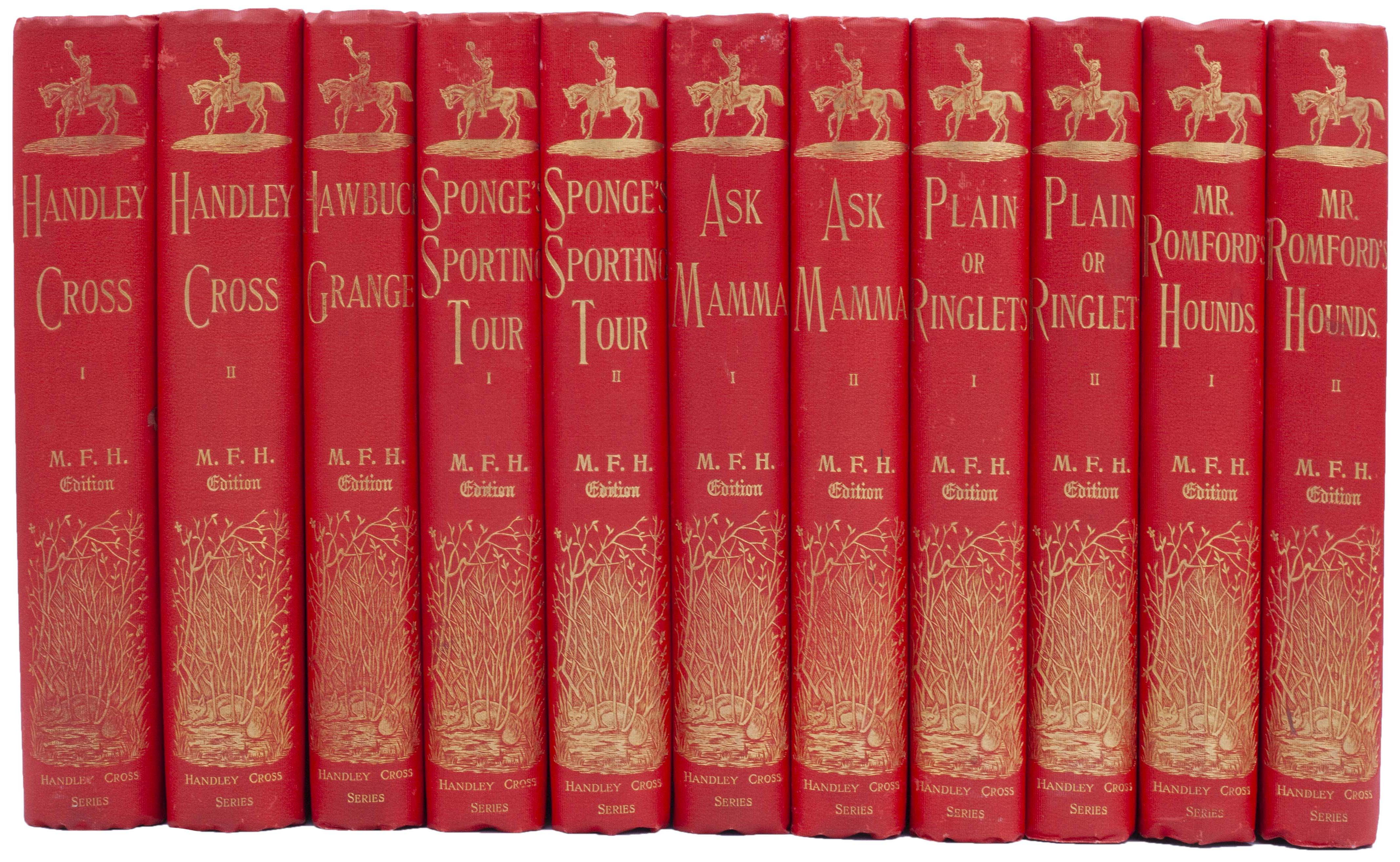 Limited ‘Master of Foxhounds’ edition, finely printed at the Whitefriars Press. Having published the first editions of several of Surtees’s sporting novels, Bradbury, Agnew, & Co. gathered and reprinted the six most successful as the ‘Handley Cross series’ as luxury sets. Publisher’s advertisements at the rear of the present volumes advertise, besides the ‘M.F.H. edition’, a ‘Country Gentleman’s Library edition’ and the ‘“Jorrocks” edition’ (each comprising only six volumes), described thus: ‘This inimitable series of Volumes is absolutely unique, there being nothing approaching to them in all the wide range of modern or ancient literature. Written by Mr. Surtees, a well-known country gentleman, who was passionately devoted to the healthy sport of fox-hunting, and gifted with a keen spirit of manly humour of a Rabelaisian tinge, they abound with incidents redolent of mirth and jollity. The Artist, Mr. Leech, was himself also an enthusiast in the sport, and has reflected in his illustrations, with instinctive appreciation, the rollicking abandon of the Author’s stories.’

Surtees’s distinctively adventurous style, often coarse and colloquial, has earned admirers and critics for his works in equal measure, yet his sporting novels remain the most popular of the nineteenth century. ‘His books ran counter to the currents of his age in their lack of idealism, absence of sentimentality, and almost wilful flouting of conventional moralism. His leading male characters were coarse or shady; his leading ladies dashing and far from virtuous; his outlook on society satiric to the point of cynicism. One Victorian theory was that such readership as he enjoyed was due to the humour of John Leech’s illustrations, a view perpetuated in the Dictionary of National Biography. Yet, paradoxically, the qualities that in his own time prevented an appreciation of his talents as a writer, preserved his books in a later age from the oblivion which befell many of his more famous contemporaries.

‘Surtees’s range was limited, his style often clumsy and colloquial. Even in the better-constructed novels the plots are loose and discursive. Nevertheless, his sharp, authentic descriptions of the hunting field have retained their popularity among fox-hunters, for whom the sanitized (and in their day immeasurably better-selling) hunting novels of George Whyte-Melville have long lost their appeal. Among a wider public his mordant observations on men, women, and manners; his entertaining array of eccentrics, rakes, and rogues, his skill in the construction of lively dialogue (a matter over which he took great pains); his happy genius for unforgettable and quotable phrases; and above all, his supreme comic masterpiece, Jorrocks, have won him successive generations of devoted followers. Although his proper place among Victorian novelists is not easy to determine, his power as a creative artist was recognized, among professional writers, by Thackeray, Kipling, Arnold Bennett, and Siegfried Sassoon, and earned the tributes of laymen as distinguished and diverse as William Morris, Lord Rosebery, and Theodore Roosevelt.’ (ODNB).