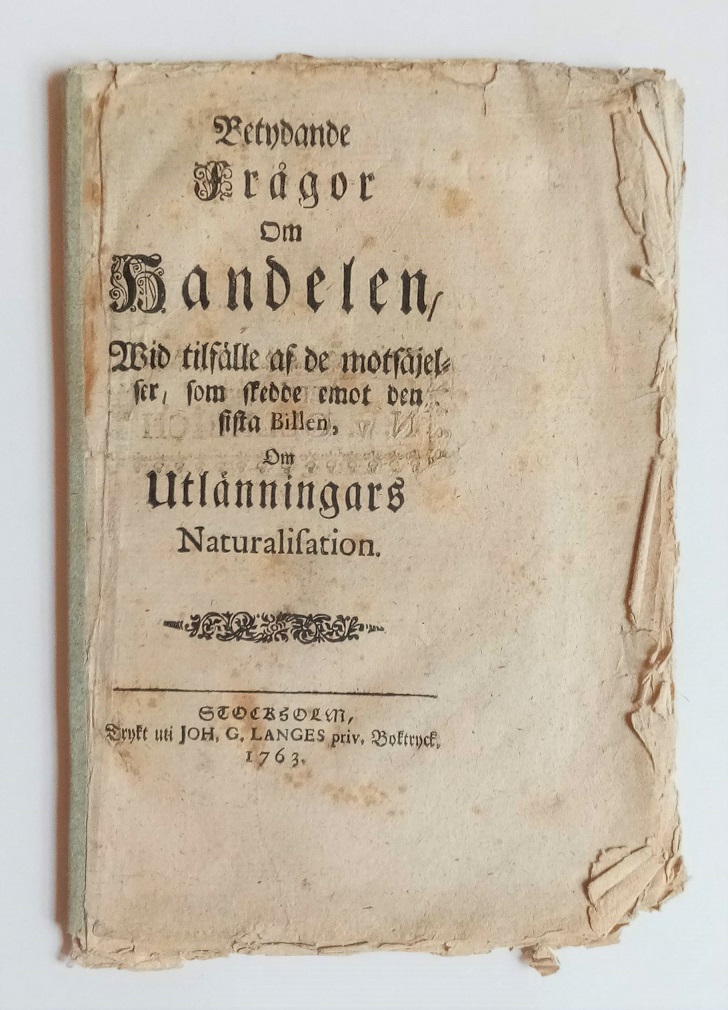 First Swedish edition, scarce, of this history on the treatment of foreign residents in Britain, Reflections on the Expediency of a Law for the Naturalization of Foreign Protestants (1751–1752). This book comprises only the main body of Part II (1752), ‘Important Queries occasioned by The Rejection of the late Naturalization Bill’, with Part II’s original ‘Preparatory Discourse’ truncated to a succinct preface and omitting the appendix.

In Britain the question of the naturalization of foreigners had been controversial for over a hundred years. The government wished to encourage the immigration of European Protestants, but public opinion was xenophobic. An Act to facilitate their immigration was passed in 1708 and then repealed in 1711. In 1751 Robert Nugent’s bill, similar to that of 1708, was considered, but again public opinion was so strongly against it that it was not passed.

Tucker, in this work, supports the government initiative. In Part I “he sketches the policy of the government toward aliens from the Middle Ages... showing how narrow commercial and sectarian interests had played upon the traditional national prejudice against foreigners, which he calls ‘the epidemical disorder of the country’” (Schuyler, Josiah Tucker,p. 19). In the second part he deals with various objections which had been made to the bill, such as that immigration would raise unemployment, and that the influx of foreigners would corrupt British morals. He argues against these points that unemployment is caused not by overpopulation but by impediments to the circulation of labour which would be removed if the country were less sparsely inhabited; and that British morals, far from being endangered by the foreigners, were so bad that it was the foreigners who were in danger of being corrupted.

Tucker pays tribute to Francis Bacon, William Petty, William Temple, Josiah Child, Algernoon Sidney and others, and his work continues in the same vein as theirs, which ‘contributed much to cure the Nation of their old Aversion to Foreigners, especially the most useful Part of them, Merchants and Mechanicks’.

Not in COPAC. WorldCat lists only 2 copies, both at National Library of Sweden.

A journey from London to Genoa, through England, Portugal, Spain, and France . . . The third edition.

First published in English earlier the same year in both quarto (two volumes) and octavo (four volumes) formats. First published in Italian in 1762–3 following a journey made in 1760, Baretti rewrote the book in English, considerably expanding it, after a second journey made in 1768–9. The result is ‘Baretti’s longest and best sustained work in English, and upon it rests his chief claim to a place of honour in English literature’ (Robertson, Los curiosos impertinentes, 1992, p. 28).