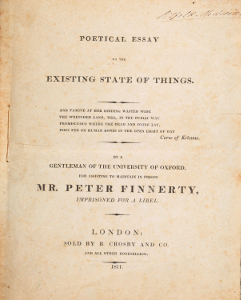 Bodleian Libraries announce their 12 millionth acquisition, with a little help from Quaritch.

Percy Bysshe Shelley’s ‘lost’ Poetical Essay on the Existing State of Things was the star of a special event in Oxford this week. The printed pamphlet is the only known copy in existence and is being used to mark a collecting milestone for the Bodleian.

Mystery has surrounded the work ever since it was printed by a stationers on Oxford High Street more than 200 years ago. Published under the alias of ‘a gentleman of the University of Oxford’, it wasn’t until 50 years after Shelley’s death that the work was attributed to him and, even then, historical sources implied that it was impossible to find a copy. The pamphlet was acquired by the Bodleian through Quaritch after it was rediscovered in a private collection.

Shelley’s Poetical Essay is now available to view online at http://poeticalessay.bodleian.ox.ac.uk/. The website includes a digitized version of the pamphlet alongside the fully transcribed text.