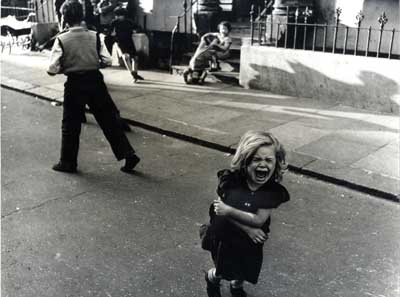 Open Tuesday to Saturday 10.00am – 5.00pm,
Sunday 1.30 – 5.00pm, closed Mondays
26 January – 7 April
A publication on Roger Mayne’s work is available.
The exhibition is in association with Bernard Quaritch Ltd.

Roger Mayne (born Cambridge, 1929) became seriously interested in photography while studying for his degree in Chemistry at Balliol College, Oxford. A few months after he graduated in 1951, six of his photographs appeared in Picture Post. In 1955 he met Paul Strand in Paris and Strand taught him the importance of print quality. He was also influenced by the ‘decisive moment’ approach of Cartier-Bresson. When he began to photograph in Southam Street, London W11, in 1956, his keen sense of timing and eye for the incidental became evident, especially when photographing children. He was to return often to this same street, where he took some of his best-known photographs. He also photographed at St. Stephen’s Gardens, Addison Place and other west London streets as well as in Soho and Brick Lane.

A major exhibition of Mayne’s work was held at the Victoria and Albert Museum in 1986 and his ‘Girl jiving’ was chosen for posters promoting Tate Britain’s major exhibition ‘How We Are: Photographing Britain from the 1840s to the Present’ in 2007.