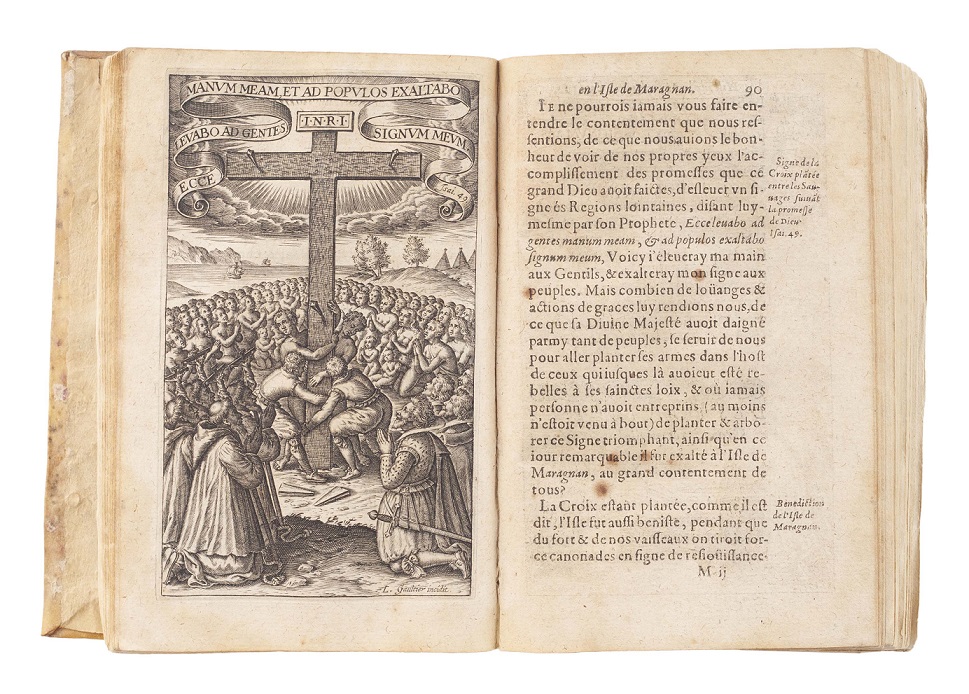 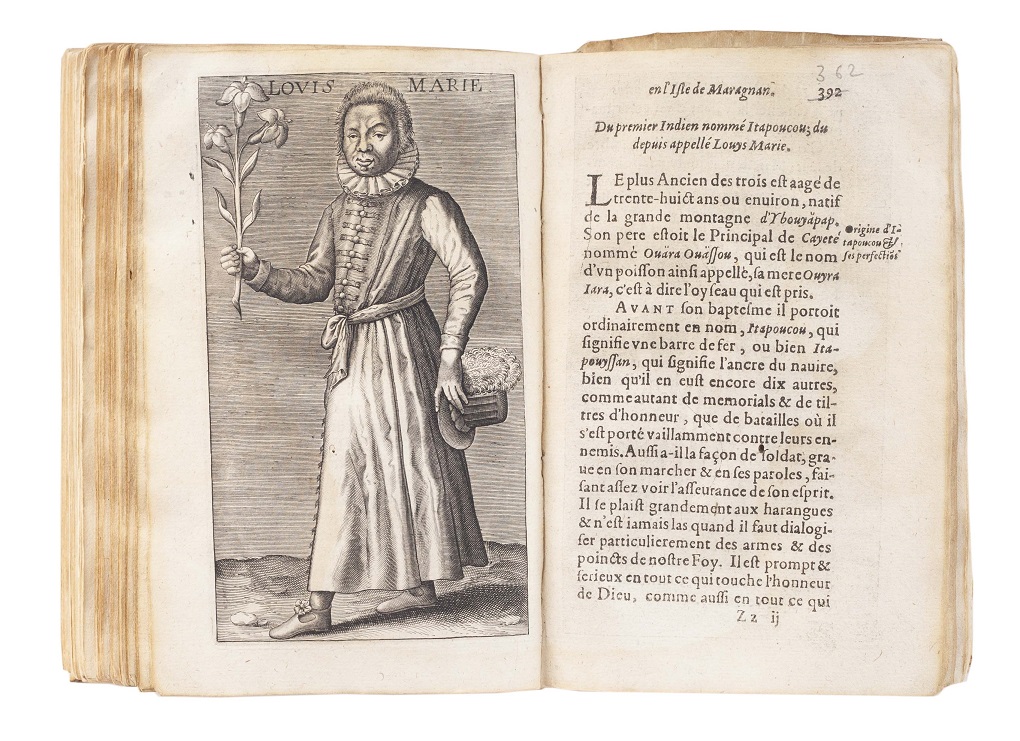 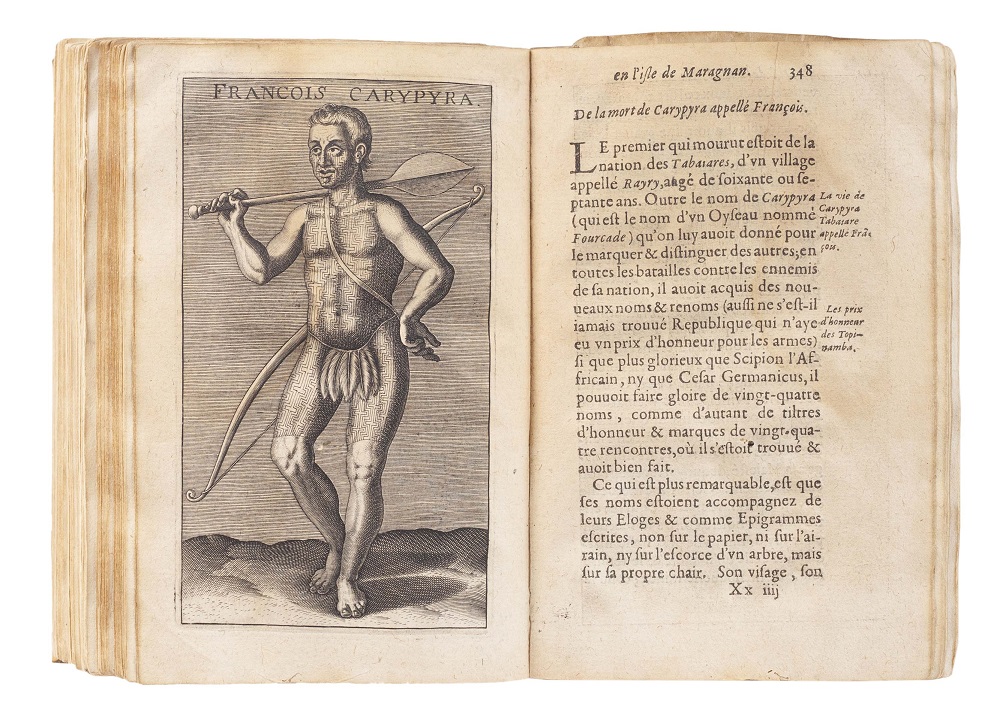 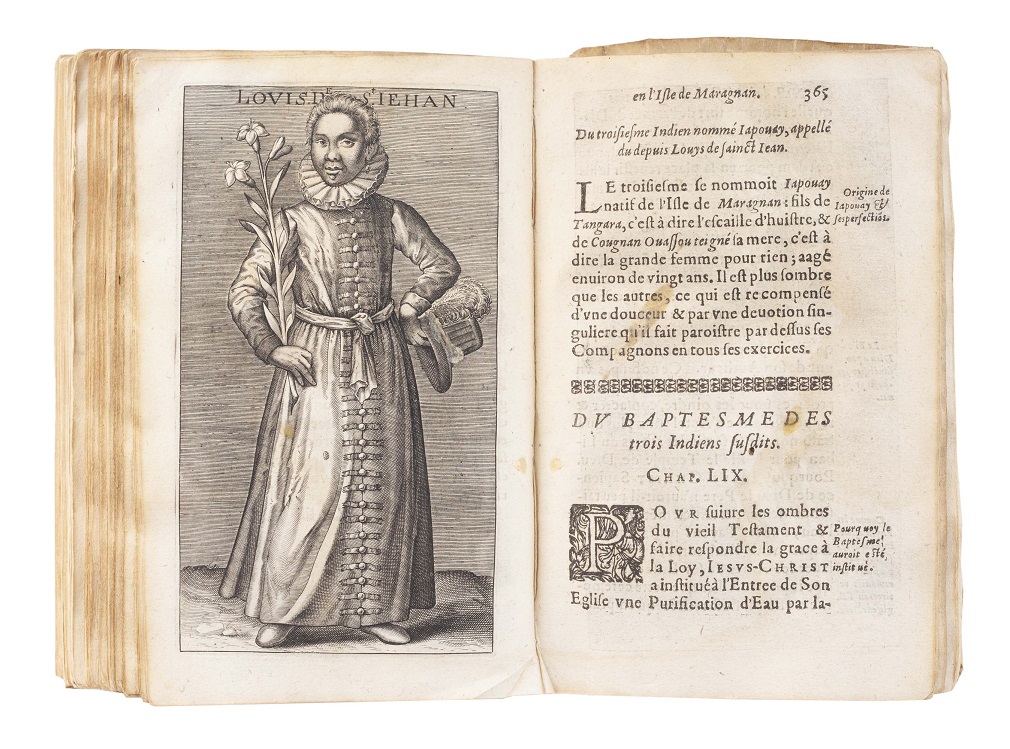 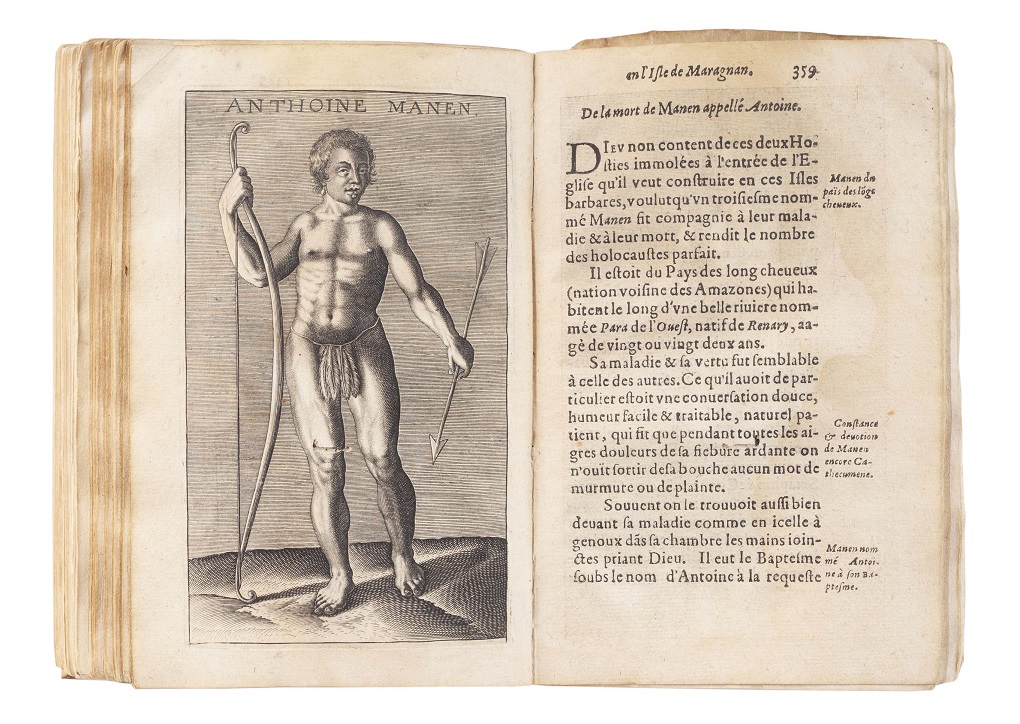 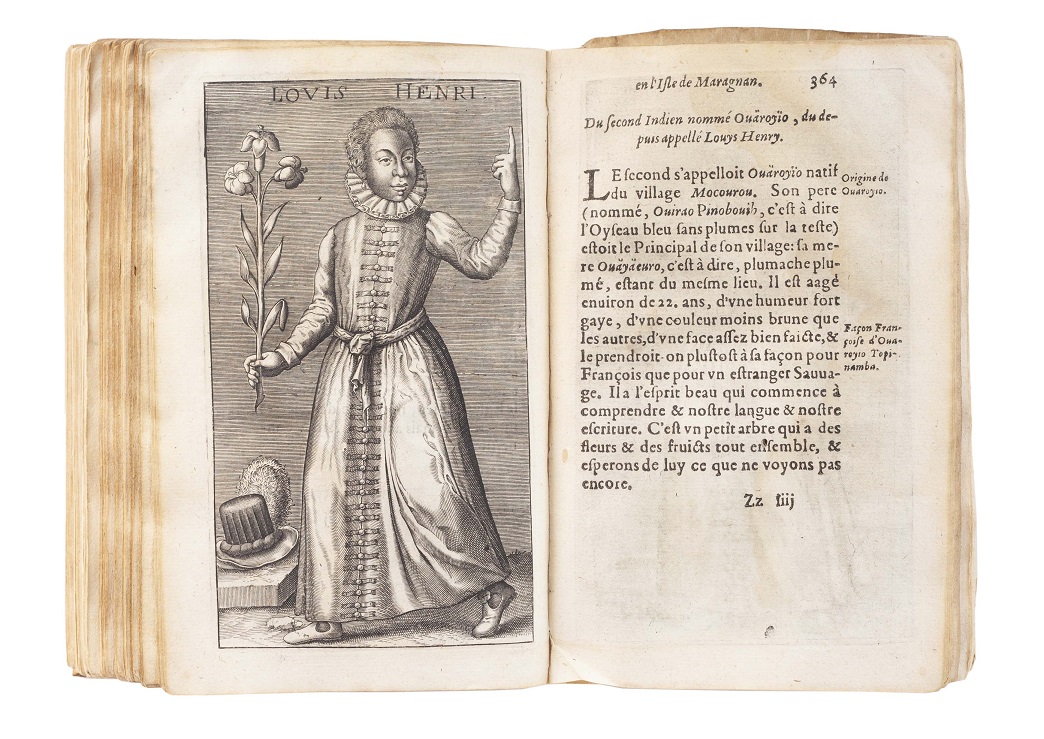 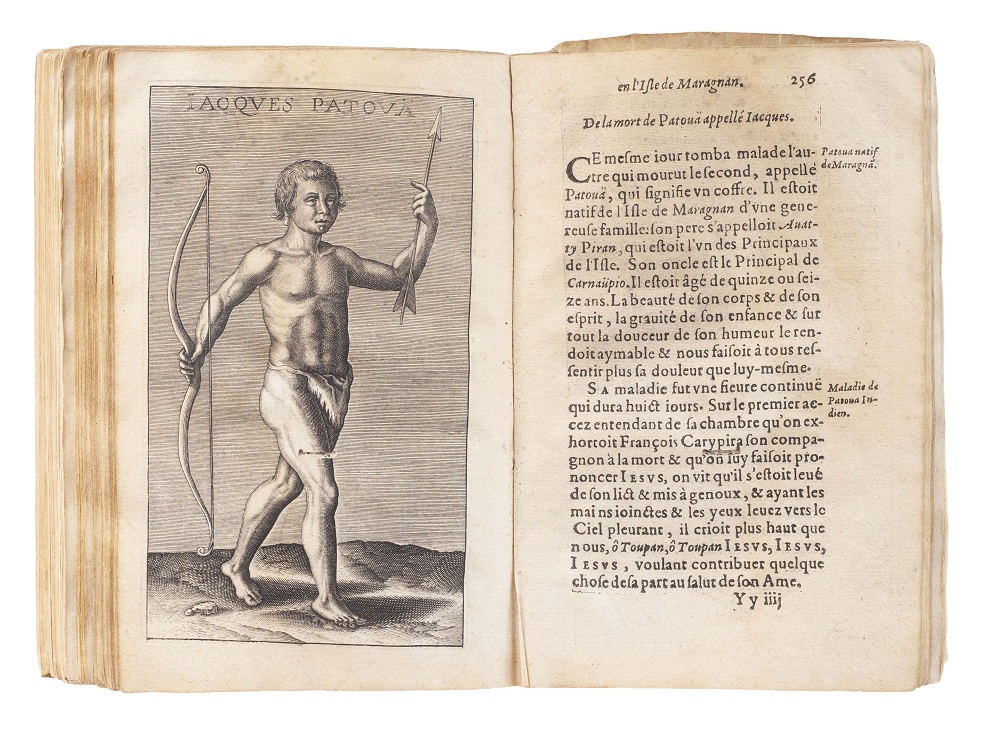 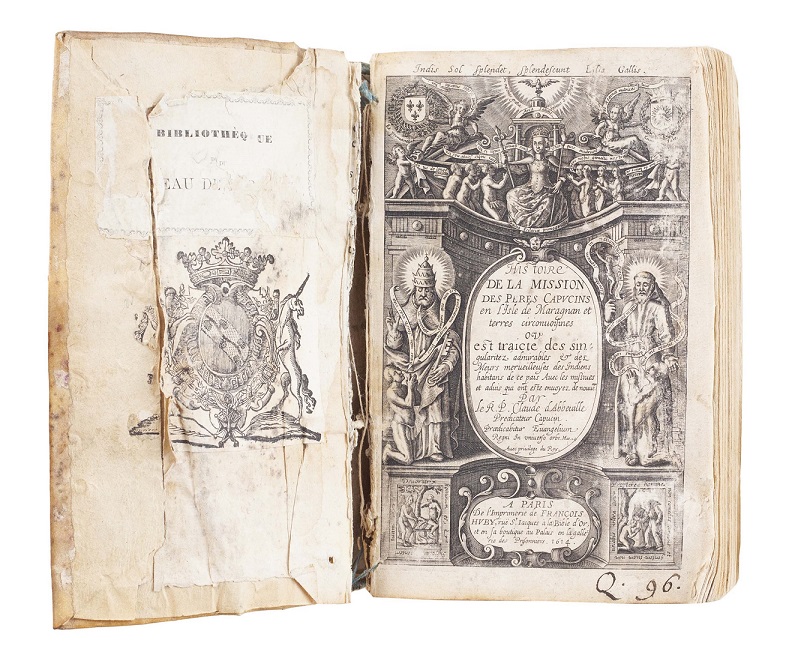 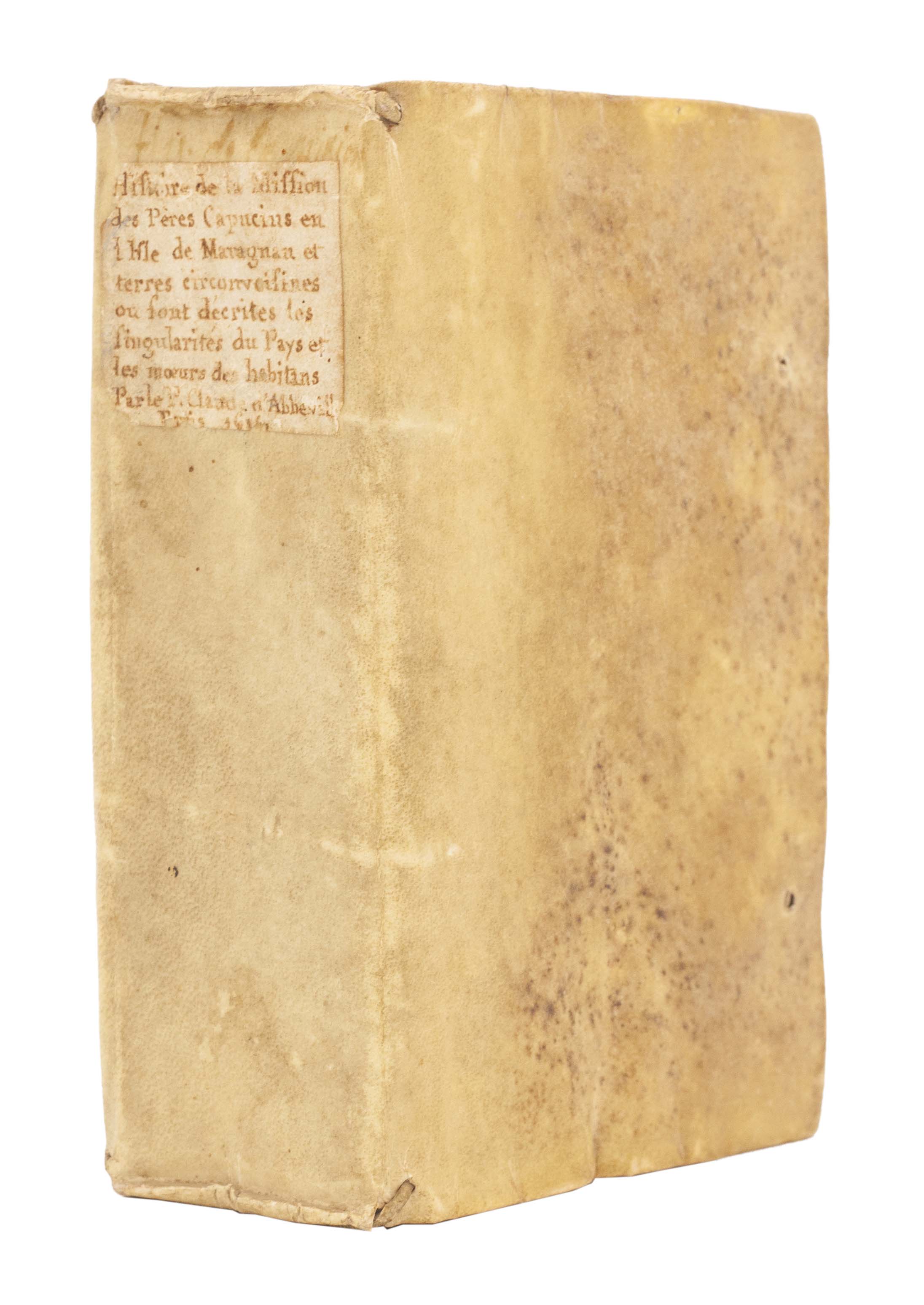 Second edition, enlarged and revised from the first edition published earlier the same year, a handsome copy. The first written account of the Capuchin mission to Maranhão, an island on the coast of Brazil, of which, Sabin notes, this is the earliest mention. In 1612 the mission, composed of the French Capuchins Yves d’Evreux, Arsène de Paris, Ambroise d’Amiens, and Claude d’Abbeville, accompanied Daniel de la Rivardière’s expedition to settle Maranhão. Relations between the French and the local Tupi people were good and the Capuchin mission initially successful. Arsène and d’Abbeville soon returned to France accompanying six important Tupi, portraits of whom, in European dress, can be found in this account. The Tupi ambassadors caused a sensation in Paris, where curious crowds flocked to see them and ‘the Histoire de la mission seems to have been printed very quickly in order to take advantage of the presence in Paris of the six Tupi from Maranhão ... It appears that the first edition was soon out of print, and a second was printed. This was published with the misprints corrected, and a more extensive index was compiled and printed in 35 pp. in double cols’ (Borba de Moraes, trans.).

‘It is the most important text – along with that of Yves d'Evreux – not only on the French attempt to colonise the island of Maranhão, but above all for the precious information it provides on “the admirable singularities and the marvellous manners of the local people”’ (Duviols, trans.). D’Abbeville relates the mission’s outward voyage, the arrival in Maranhão, the death of Father Ambroise and the Capuchins’ activities on the island. He also adds detailed descriptions of the region, including the animals, birds and fish found there, as well as chapters on the customs, laws, wars, and history of the Tupi people. His account ends with the return voyage to France, their arrival and welcome in Paris, and the ensuing festivities.

The missionaries, with the six Tupi ambassadors, ‘landed at Le Havre after a stormy crossing and were given a great reception, with a procession, gun salute, visit to the Governor and acclamation by the crowd. There were similar festivities in Rouen. But the greatest excitement was in Paris. A hundred priests greeted the Tupinambá party at the city gates, and escorted it to the Capuchin church for a mass attended by a galaxy of French nobility. The Tupinambá marched in the procession wearing their feathers and holding clubs. The Parisians were wild with curiosity: people poured in from the countryside, and the excited crowd burst the gates of the Capuchin convent housing the Tupi. The Tupinambá were taken to the Louvre to visit King Louis XIII, and their leader made a speech in Tupi. But the inevitable European diseases struck these Americans – the sixty-year-old Carypira caught influenza and died, and two of his companions died soon after. They were buried in Franciscan habits. But the three survivors received the full panoply of French official hospitality. They were taken for baptism in the Capuchin church in the Faubourg Saint-Honoré, wearing long soutanes of white taffeta buttoned down the front with silk buttons and with small valois collars, and carrying tall hats with white plumes. Each carried a fleur-de-lys as a symbol of submission to the French. King Louis and his mother the Regent Marie de Médicis acted as godparents, and the Archbishop of Paris officiated. The leading Tupinambá was christened Louis-Marie, and he made a speech of acceptance. The three were then taken to the convent of Sainte-Claire to satisfy the curiosity of its nuns, who were desperate to see the exotic strangers’ (Hemming, Red Gold, p. 206).

‘The narrative of the journey, and all the events, is the principal printed French source that exists about this tentative colonization of the north of Brazil. Although not endowed with the spontaneity and the literary talent of Yves d’Evreux, Claude d’Abbeville gives us valuable information concerning the religion and “astronomy” of the Tupis, not to be found in any other writings’ (Borba de Moraes). 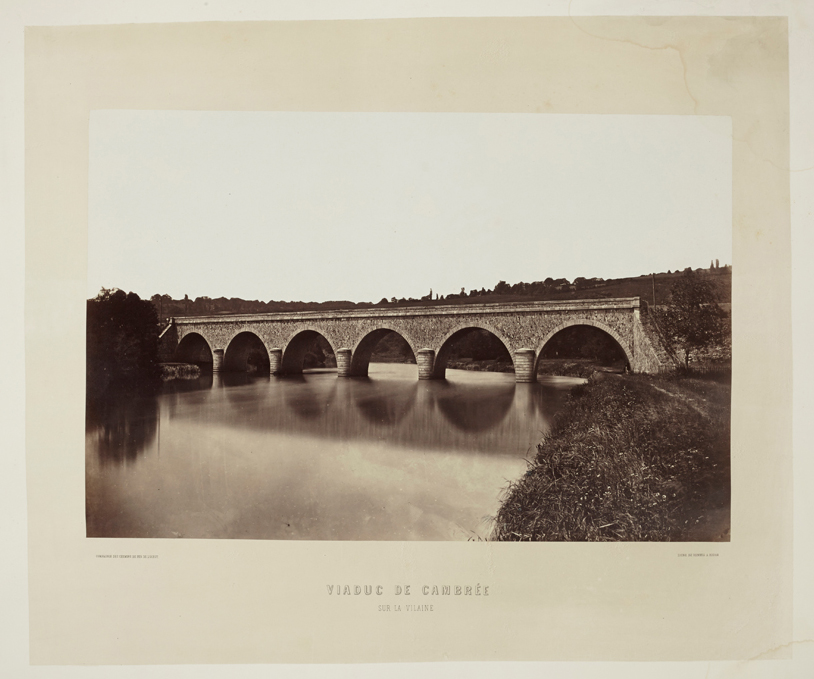 A collection of eight albumen prints (or salt and albumen collages) from mammoth-plate negatives of railway bridges over the Seine, Sarthe and Vilaine rivers.

An exceptional series of oversize prints commissioned by the Compagnie de Chemins de Fer de l‘Ouest to commemorate the construction of a series of new bridges completed 1861–1864, including the metal bridge at Orival, later destroyed in the Franco-Prussian War, and the oblique stone bridge of Corbinères with its elegant thirty-metre columns.