Added to your basket:
The demand for labour is wealth … Supplement to monopoly and taxation vindicated against the errors of the legislature.

Very rare first edition of Calvert’s supplement to his own work, Monopoly and taxation vindicated etc., published in 1821. Calvert wrote anonymously in the name of ‘a Nottinghamshire farmer’, but here uses his name. The supplement argues that Britain’s wealth and military success against France are derived from labour and productivity, which are driven by the high demand that wealth creates; should taxation be lowered and monopolies reduced, the result will be falling prices and a fall in demand, leading to catastrophes such as the famine in Ireland after the failure of the potato crop in 1816. Ricardo comes under fire for seeking payment of the national debt and reduction of taxes; so too do his forebears Adam Smith and Jean-Baptiste Say, the latter being found to be ‘constantly in error’. On the contrary, Calvert claims, the wealth of Britain is to be found in its national debt. Calvert ends his account with a sarcastic addendum in which he presents a ‘joke’ bill that foretells, in falsely optimistic terms, the flight of all money from Britain, there being no demand for it there.

Calvert, quite unknown, falls relatively early within the anti-Ricardian tradition, writing contemporaneously with Ricardo’s activities in the House of Commons. Writing from Nottinghamshire, he expresses a typically anti-Ricardian isolation. This ‘was never a cohesive movement which even approximated a “school”. It lacked a positive counter-thesis to combat Ricardo’s; its members worked independently, with little mutual awareness’ (Gordon, p. 5).

Goldsmiths’ 23376. See introduction to Barry J. Gordon, Non-Ricardian political economy (1967). OCLC and COPAC list only three copies in British libraries, at Senate House, Newcastle and Southampton, and only two copies in the United States, at Yale and Columbia. 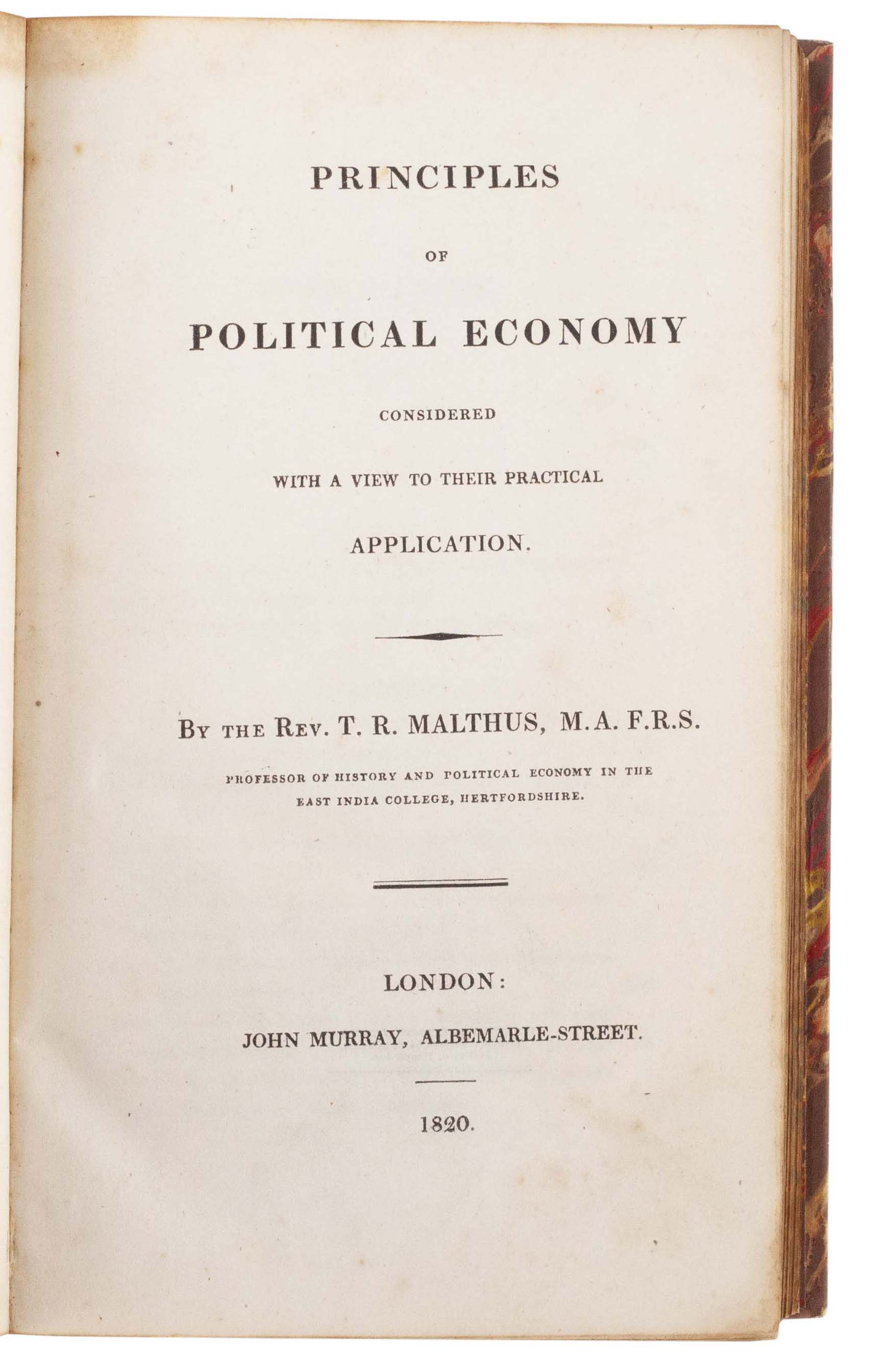 Principles of political economy considered with a view to their practical application.

First edition. The Principles were developed through controversy with Ricardo, especially with regard to the theory of value, but the origins of the essay are in the Essay, which constituted Malthus’s earliest writings on prices, income and savings. The difference that emerges between Malthus and Ricardo with regard to Say’s Law, from which this book is an early departure, has not been fully understood because of Ricardo’s unwillingness to follow through on concessions he was forced to make. Malthus argued that increased incomes did not lead to increased consumerism, but that consumers faced with unfamiliarly high salaries would save. Some of this misunderstanding of Malthus derives from Keynes’s positive assessment of Malthus, which has led to the latter being viewed as an early Keynesian because of his theories on prices and wage rates (New Palgrave). Keynes declared: ‘If only Malthus, instead of Ricardo, had been the parent stem from which nineteenth-century economics preceded, what a much wiser place the world would be today!’.

County of the Isle of Ely, Public Air Raid Warning.